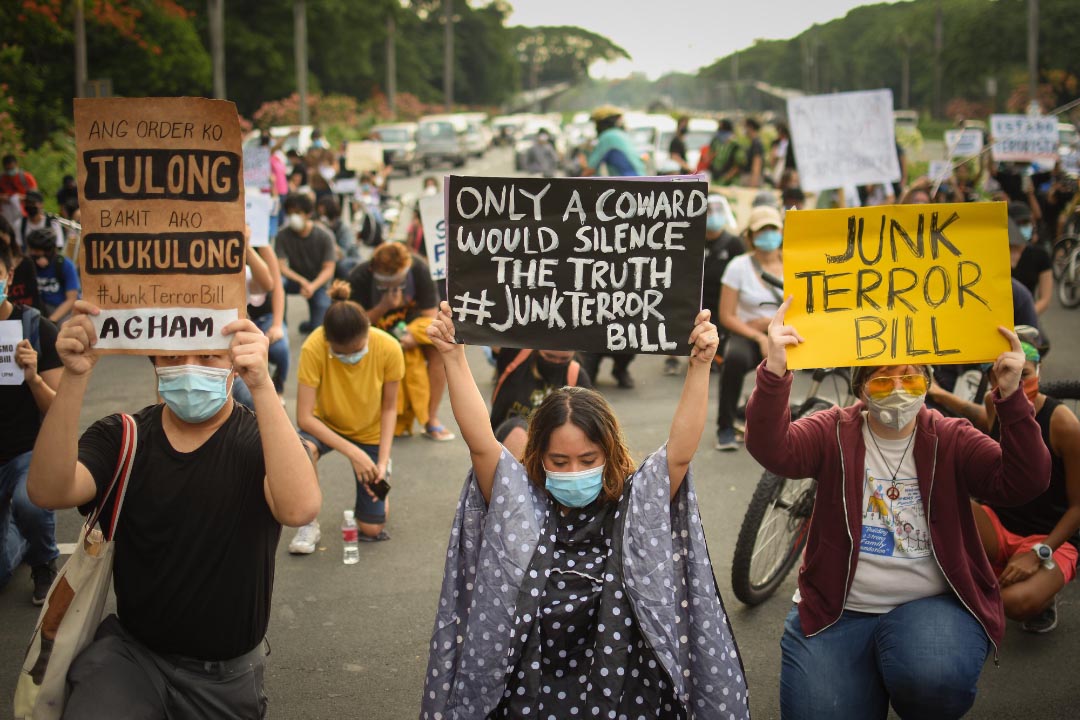 MANILA – Members of the religious community are among those who have opposed and joined the growing clamor to stop the signing into law the controversial anti-terror bill, saying this will threaten the people’s “hard won freedoms.”

“So we fight the virus, we fight policies that keep our people poor, and we fight the anti-terror bill that threatens our hard won freedoms,” said Manila Bishop Broderick Pabillo in a statement.

Critics of the looming passage of the Anti-Terror Bill held a protest action on Friday, June 12, in the University of the Philipppines – Diliman. Dubbed as Grand Mañanita, a reference to the birthday party held for a ranking police official amid strict lockdown, various groups observed physical distancing and use of face masks, face shields, alcohol, and sanitizer.

The bill has been transmitted to President Rodrigo Duterte for signing, after it was certified as urgent and a priority.

The Francescan community in the Philippines found it terrifying that lawmakers have turned their attention to the passing of a bill supposedly against terrorism when it has yet to look into mass testing, provision of decent accommodations for Filipino migrant workers, efficient mass transportation for returning workers, to name a few.

“Let our government leaders obey God’s commands by using its resources and energy to address the most pressing needs of our nation. Many are already terrorized, physically and psychologically. And this House Bill 6875 has terrorized our already terrorized people,” the Inter-Franciscan Ministers’ Conference of the Philippines (IFMCP) and Franciscan Solidarity Movement for Justice, Peace and Integrity of Creation (FSMJPIC) said in a joint statement.

Who are the real targets?

In a statement, the Philippine Council for Evangelical Churches, through its national director Bishop Noel Pantoja, said they recognize the vital need to render terrorism a crime as it brings about senseless destruction not just to individuals but also to communities as seen during the Marawi siege.

However, Bishop Pantoja pointed out the vague definition of terrorism as seen in the proposed law and the extended period of warrantless detentions have brought them apprehensions as it may open the way for “serious abuses of a person’s rights and dignity.”

With the expanded definition of terrorism, the Missionary Benedictine Sisters of the Manila Priory said the real targets of the proposed law are the dissenters, political opposition, critics, activists, among others.

“Democracy essentially includes dissent and critique. To make this unlawful is to kill democracy,” the Benedictine nuns said in a statement, adding that if this is signed into a law, it will “sow fear and widespread panic and therefore will give rise to another kind of terrorism: state terrorism.”

The Philippine Ecumenical Peace Platform has earllier appealed to President Duterte to “hear the voices of Filipinos who bear the promise of peace in their hearts and veto this Bill when it comes to him for action.”

“At times like these, the Anti-Terrorism Bill will not serve to end the conflicts of our land. The meager resources of government are most needed not for anti-terror expenditures but for setting and re-building the economic and social structures that everyone needs as we fight the pandemic before us,” the PEPP said.

Bishop Pantoja said, “We believe that at the very least the Anti-Terrorism Act needs to undergo a much more extensive process of consultation and deliberation.”