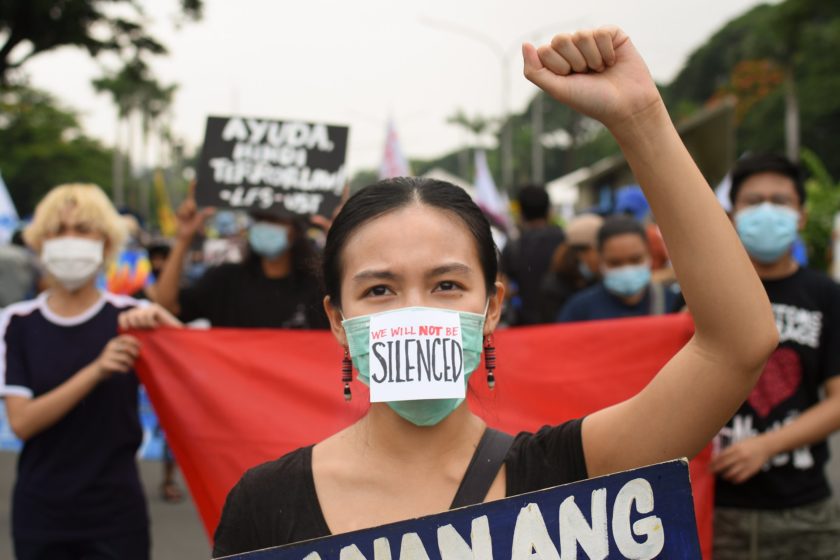 “The Anti-Terror Act of 2020 tramples on our basic human rights and it is unconstitutional. It does not provide us safeguards and protection from terrorism. If anything, it is the very tool that creates all-out terror among the people.”

MANILA – More than a thousand protesters trooped to UP Diliman University Avenue a day after President Rodrigo Duterte signed the Anti-Terror Act of 2020.

Refusing to be terrorized by the dangerous provisions in the Republic Act. No. 11479, activists from various sectors pointed out that “the real terrorists” are Duterte, his Cabinet members, and the authors of the bill.

Among those who joined were members of progressive groups who experienced first-hand what they described as “the Duterte virus, which has been wreaking havoc on the lives of the Filipino people.”

Elmer Cordero, 72, said in Filipino, “The Anti-Terror Law should be junked. In the middle of the pandemic, the government’s misplaced priorities have hit hardest the poorest of the poor like us. Even before this law was passed, ordinary citizens like us have already experienced full-blown police brutality as we were treated like criminals when we were only fighting for our livelihood.”

Cordero is one of six members of transport group Piston who were arrested by policemen on June 2 while they were protesting for the resumption of their operations during the general community quarantine. They were detained in a cramped cell for almost a week.

“We should continue to fight while we are still alive, we can’t back down now,” Cordero said.

Members of the LGBT rights group Bahaghari also joined the protest. Some of their members were among the 20 who were arrested and detained by police last June 26 during the Pride March in Manila.

Kalvin Morales, 23, recounted the incident, “I saw how our other members were dragged by the police into the police mobile. Despite our peaceful protest and proper social distancing, we were violently interrupted and dispersed.”

With the passage of the Anti-Terror Law, Morales and his fellow LGBT activists are even more resolved to strengthen the fight against discrimination and against all forms of state oppression. “We should not cower in fear, and we should all the more continue to fight.”

Former Anakpawis Rep. Ariel Casilao, meanwhile, maintained that Duterte signed the bill into law because he is “afraid of the people’s wrath.”

Casilao said the people’s anger intensified due to the Duterte administration’s ineptitude and incompetence in dealing with the COVID-19 crisis.

Casilao is still facing charges of inciting to sedition. He and six other relief volunteers were arrested in Norzagaray, Bulacan on April 19. They were released after posting bail amounting to P40,000 each.

Casilao said the new law will further criminalize dissent, including the long-time struggles of the farmers and fisherfolk for their right to land and livelihood.

For her part, Mae Paner, also known for her satirical performances, said that government should take criticisms positively. “The role of the artist is to criticize. I am an artist. I am not a terrorist,” she said.

Ma. Kristina Conti of Concerned Lawyers for Civil Liberties agreed that the new law will be used against political dissenters.

“Duterte’s Anti-Terrorism Council will be the one to determine who will be tagged as terrorists and what constitutes terrorist acts,” Conti said.

In particular, Conti said Sections 4-8 of the Anti-Terror Act of 2020 are the “most problematic.”

“I am encouraging you all to look into the terms used in the Anti-Terror Act of 2020. ‘Public safety’, ‘public emergency’, ‘serious danger’, and other related terms are very, very dangerous. The primary challenge to this law is its vagueness, and then being ‘overbroad,’” Conti said.

She added that under the Anti-Terror Law, a suspected terrorist is no different from “proven terrorists.”

Conti also said that government can now access all information of any suspected terrorist as surveillance has become legal under the law.

One of the protesters, Lina Macaurog, 50, considers herself “a candidate.” She is a Martial Law survivor, a member of SELDA (Samahan ng mga Ex-Detainees Laban sa Detensyon at Aresto) and a Muslim.

“We may not be terrorists but we are well-aware of the intent of the law, that is why we continue to resist this. President Duterte has long been treating Moro people as terrorists,” Macaurog told Bulatlat in an interview.

“The Anti-Terror Act of 2020 tramples on our basic human rights and it is unconstitutional. It does not provide us safeguards and protection from terrorism. If anything, it is the very tool that creates all-out terror among the people,” Macaurog said.