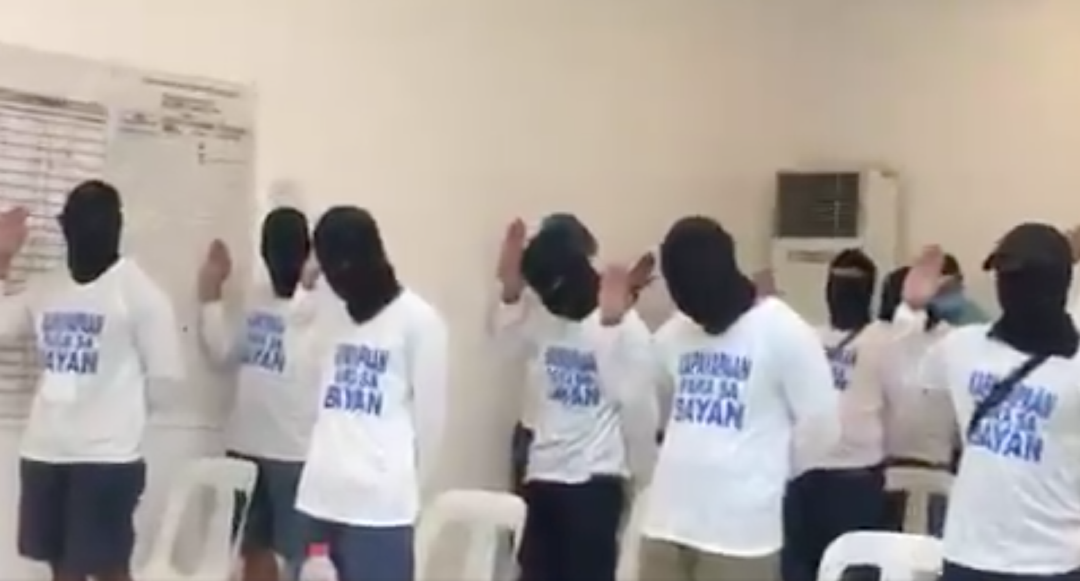 STA. ROSA, Laguna – Labor groups and progressive organizations condemned the presentation of 16 workers as “rebel returnees” on Labor Day, May 1, citing it as staged and a clear case of harassment.

The Philippine National Police (PNP) Police Regional Office 4A and the 202nd Infantry Brigade of the Philippine Army launched a press conference at Camp Vicente Lim presenting 16 workers from Coca-Cola Sta. Rosa as “rebel returnees.” Brig. Gen. Vicente Danao of the PNP PRO4A stated that “New People’s Army rebels are infiltrating industrial areas through labor unions to force the companies to shut down their operations so that innocent employees will be agitated to go against the government.”

The press conference confirmed suspicions by labor center Pagkakaisa ng Manggagawa sa Timog Katagalugan (Pamantik-KMU), who stated in an alert April 30 that 16 Coca-Cola workers were picked up after the end of their shift for an alleged “Labor Day program,” and suspected that they would be presented as fake surrenderees.

In an interview with Bulatlat, Dandy Miguel, vice chairperson of Pamantik-KMU, flat out called the “surrender” a lie, stating that the “surrenderees” were all legitimate workers of Coca-Cola Sta. Rosa.

“They were targeted by the capitalists at Coke in order to stop them from organizing,” he said. Miguel also pointed out that one of the workers was Rafael Baylosis, a union leader who led the Coca-Cola strike in 2018.

Bayan Muna Rep. Ferdinand Gaite also condemned the press conference, calling it “atrocious” that the fake surrender was conducted on Labor Day, “on the day that we are supposedly giving honor to our workers.”

He also pointed out that the surrender violated prohibitions on mass gatherings. “On top of the political harassment, the military is putting in danger the health and lives of the workers,” said Gaite.

The press conference was only the latest in a series of harassments by the police, military, and intelligence assets against Coca-Cola workers.

The group also called out former labor leader turned police asset Rey Medellin as instrumental to the continuing harassment faced by the workers.

On March 29, Medellin posed as “Rebo,” a “rebel returnee” who “surrendered” in a similar staged ceremony in Camp Vicente Lim. On April 1 and 2, Medellin was reported to be involved with the PNP in visiting union leaders’ houses and coercing them to surrender as members of the NPA.

Nine workers were brought to Camp Macario Sakay, April 23, and interrogated as well, before being coerced into not participating in union matters.

The May 1 “surrender”, Defend Coca-Cola Workers said, was “another attack brought about by the National Task Force to End the Local Communist Armed Conflict in order to discredit legitimate organizations and unions.”

Gaite also noted that the attacks played into the military’s scheme of cashing in on their Enhanced Comprehensive Local Integration Program (E-CLIP), where each “rebel returnee” was set to receive as much as P160,000 on surrender.

Gaite contrasted government harassment of workers with the aid being given to them, concluding that “while the government’s performance is outstanding in harassing workers, it is, as expected, abysmal in helping them.”

He noted that the Department of Labor and Employment’s (DOLE) Covid-19 Adjustment Measures Program (CAMP), Tulong Panghanapbuhay sa Ating Disadvantaged/Displaced Workers (TUPAD), and DOLE-AKAP for OFW’s have only covered 721,023 workers out of the two million estimated by DOLE to have been displaced and need help due to the ongoing pandemic.

“We are experiencing the worst jobs crisis in history with over 23 million unemployed Filipinos,” Gaite said. “Instead of wasting time and precious resources in attacking workers, the government should focus its energies into abating the adverse impacts of the health crisis.”

The Bayan Muna representative stated that government must “re-channel funds allocated for irrelevant programs,” and called for E-CLIP to be defunded and its P260 million budget be “re-channeled towards relief and aid.”