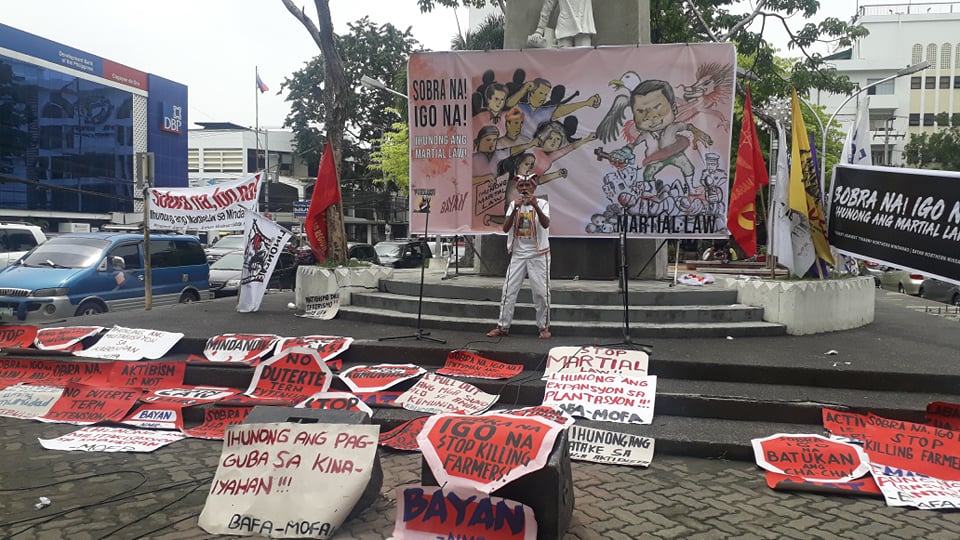 Kalumbay described Datu Reynaldo Ayuma as being “consistently at the forefront of the struggle of the Camansi evacuees against development aggression of their ancestral domain.”

MANILA — Seven Lumad, including a datu (leader of a tribe) were arrested in simultaneous raids conducted by combined elements of soldiers and policemen in purok 6, barangay Blangko, Balingasag, Misamis Oriental around 3:30am today, June 26, according to Kalumbay Lumad Organization.

Kalumbay said the seven Lumad are among the residents of sitio Camansi, barangay Banglay, Lagonglong, Misamis Oriental, who forcibly evacuated from their community following intense militarization, red-tagging and harassment in 2018. The local government unit plans to expand tourism projects in the area and foreign companies also have mining and logging interests in Mt. Balatukan where the community sits, the group said.

Kalumbay described Ayuma as being “consistently at the forefront of the struggle of the Camansi evacuees against development aggression of their ancestral domain.”

The Camansi evacuees stayed at the Misamis Oriental Provincial Capitol Grounds from 2018 until 2019. Last year, the local government demolished their makeshift shelters. They were housed in the UCCP Compound in Cagayan de Oro City. Some of the evacuees sought residency in farming communities in Misamis Oriental for livelihood. The seven are currently residing in barangay Blangko where they were raided and arrested.

Kalumbay Lumad Organization condemned the arrest, saying that the evidence are planted to justify the raid. The group said the same tactics were used to arrest other Lumad and farmers in the region, including Kilusang Magbubukid ng Pilipinas -Northern Mindanao Chairperson Ireneo Udarbe and Kalumbay Chairperson Datu Jomorito Goaynon.Udarbe has been released but Goaynon continues to languish in jail over trumped-up charges.

“This is another attack on legitimate organizations critical of Duterte administration’s anti-poor policies,” Kalumbay said.

As of this writing, Kalumbay and the relatives are still trying to find out where the seven have been taken.

The post Lumad chieftain, 6 others arrested in Misamis Oriental appeared first on Bulatlat.