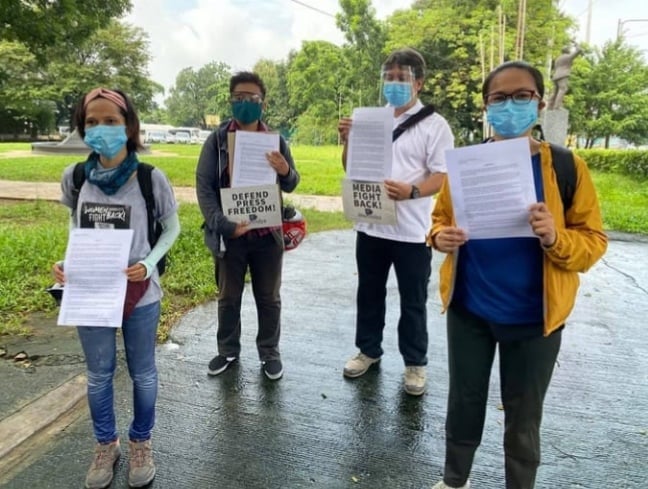 MANILA – Alternative media outfits filed before the Commission on Human Rights complaints against government officials and state security agents for violating their “fundamental right to press freedom and expression, and the right to information of the audiences they serve.”

Altermidya, the national network of alternative media outfits, Pinoy Weekly, Kodao Productions and Bulatlat filed separate complaints against members of the National Task Force to End the Local Communist Armed Conflict (NTF-ELCAC) and Philippine National Police who have threatened and tagged them as terrorists and communist-fronts.

One of the complaints is the recent confiscation by police in Pandi, Bulacan of thousands of copies of the news magazine Pinoy Weekly, which they maliciously tagged “subversive documents.”

The media outfits also cited that the vicious red baiting done by Lt. Gen. Antonio Parlade Jr. and Undersecretary Lorraine Badoy of the Presidential Communications Operations Office (PCOO) and their suspected agents has put their members’ safety and security at risk.

Kenneth Roland Guda, editor in chief of Pinoy Weekly, condemned the PNP Region 3 police for tagging the news magazine as “terrorist-related material.” The label, he said, may be used to file trumped-up charges of inciting to commit terrorism against them.

Under the Duterte administration, attacks on alternative media have been persistent. Altermidya documented one case of frustrated murder, eight cases of arrest and detention, 28 cases of threat and intimidation, which include surveillance, two cases of physical injuries, and six cases of cyber-attacks against its member-media outfits.

One of its members, Frenchie Mae Cumpio, is still detained in Tacloban for fabricated charges of illegal possession of firearms and explosives.

In a statement, the National Union of Journalists of the Philippines (NUJP) expressed its support to Altermidya.

NUJP said that while Duterte has never directly attacked the alternative media, “those in government, particularly state security, have taken the presidential wrath against the free press as license to go after those who shine the light of truth on the inconvenient truths of Philippine society.”

“It is for this shared history of struggling for press freedom and for the invaluable work they do that we are proud to have our colleagues from Altermidya alongside us in the continuing struggle to resist those who would seek to silence open discourse in our society,” NUJP said.

The complaints were received by Ronnie Rosero and Rommel Tinga of CHR Investigative Division.