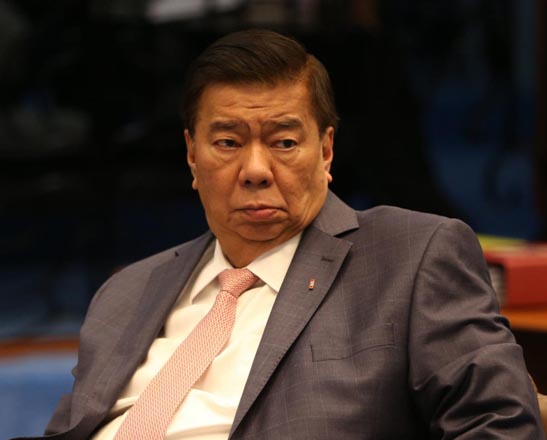 MANILA, Philippines — Senator Franklin Drilon has called for a thorough review of the National Task Force to End Local Communist Armed Conflict (NTF-Elcac) funds inside the Philippine National Police (PNP), after it was revealed that 13 million activities were done just in 2021.

The 13 million activities were revealed during the Senate hearing on the Department of the Interior and Local Government (DILG), after Drilon asked what happened to the P1.194 billion NTF-Elcac funds within DILG, which were supposedly used for meetings, convergence, and other purposes.

According to Drilon, they have computed the amount of activities that would have been done by the PNP if the 13 million number is accurate, and it yields an answer of 43,333 activities per day across the country — which the Senator said is difficult to believe.

“We computed that, and it turns out that for the past 10 months, assuming 13 million activities, that would be 43,333 activities per day for the last 10 months, which on its surface is immediately difficult to believe,” Drilon said.

“But may we request that these allocation be examined closely, and we will accept the explanation of the good sponsor,” he added.

“They had 13 million activities […] according to the Chief PNP,” Angara said.

Angara noted that 12 clusters within the PNP have done the 13 million activities, which includes the following:

In response, Drilon said he has never heard of any agency doing 13 million activities in a year.

(I have been in the Senate for 24 years, it is only now that I have heard of a report which said that an agency spent for 13 million activities in a span of one year, or less than one year.)

“Now no wonder the COA has flagged the way the expenses are being, or the budget is being disbursed: 13 million activities in a span of 10 months or something?” he asked again.

Angara said that the activities are meant to orient cleared barangays about how they would continue progress, which requires DILG and PNP personnel to do several meetings with local government units, local officials, and other national agencies.

“Broadly, its to win the hearts and minds of the communities, the cleared barangays, but for the DILG they went around — for 2021, the use of the funds was they visited the barangays which were to be covered under the 2022 appropriations, the 1,406 LGUs, they would spend time there, the DILG teams, and spend time with the community,” he said.

“And for some barangays, they would assist them in deciding or choosing which projects could be availed of, although the final decision fell to the barangays, and they would have community meetings, convergence meetings with the LGU officials, barangay officials, municipal officials, as well as they would also converge with the other national government agencies as to the needed services on the ground,” he added.

NTF-Elcac’s proposed funds for 2022 — including its budget for the current year — have undergone scrutiny in the Senate after the agency failed to submit an explanation on its expenditures.

The lack of an explanation led the Senate finance committee headed by Angara to slash NTF-ELCAC’s budget, from the proposed P28 billion to P4 billion.

Earlier, documents cited by Angara showed that only 26 of the 2,318 projects under the NTF-ELCAC’s Barangay Development Fund worth P16.4 billion have been completed.