MANILA, Philippines — A graphic circulating social media claims that Pope Francis referred to Bongbong Marcos as “an intelligent leader” and that the Pope “hopes” Marcos wins the presidency in 2022.

CLAIM: On November 9, the first graphic was published claiming Pope Francis has publicly backed the presidential bid of Bongbong Marcos, the son of the former dictator, which media outlets refuse to report.

RATING: This is fake.

What the full posts said

One post shares a graphic supposedly quoting Pope Francis as saying: “BBM is an intelligent leader. I hope he win in 2022 (sic.)”

“This isn’t being reported by the yellow media. If they’re jealous, their eyes are closed. Lugaw, any last words?” the caption reads in Filipino. 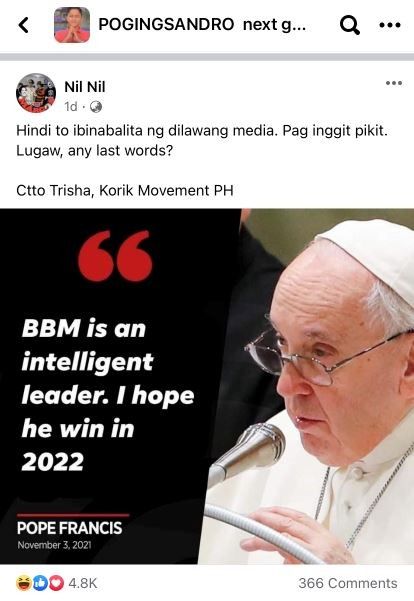 What they left out

The Pope has never released such a statement.

The original graphic by ABS-CBN News includes a quote from the Pope saying: “When we are tempted to judge others badly, we must rather reflect on our own weaknesses.”

“It is good to ask ourselves what drives us to correct a brother or a sister, and if we are not in some way co-responsible for their mistake,” he adds.

The Catholic Church in the Philippines has had a rocky history with the Marcos family.

Pope John Paul II famously visited the country in February 1981, a time when human rights violations at the hands of state forces were well-documented, and spoke out against the dictatorship of former president Ferdinand Marcos in the late strongman’s very presence.

In a speech in Manila, the Pope at the time urged the government to uphold human rights as he was quoted as saying:

“Even in exceptional situations that may at times arise, one can never justify any violation of the fundamental dignity of the human person or of the basic rights that safeguard this dignity. Legitimate concern for the security of a nation, as demanded by the common good, could lead to the temptation of subjugating to the State the human being and his or her dignity and rights. Any apparent conflict between the exigencies of security and of the citizens’ basic rights must be resolved according to the fundamental principle—upheld always by the Church—that social organization exists only fοr the service of man and for the protection of his dignity, and that it cannot claim to serve the common good when human rights are not safeguarded.”

Marcos lifted martial law on January 17, 1981, nearly a month before the Pope’s visit, by way of Proclamation 2045. This was, according to Albert Celoza’s Ferdinand Marcos and the Philippines: The Political Economy of Authoritarianism, meant to “minimize papal criticism of his regime.”

The Pope also refused to stay at the Coconut Palace, which the Marcoses had built specifically for him.

Why does this matter?

The same post, published on a group called “POGINGSANDRO next generation MARCOS Pa rin,” has been steadily circulating on social media the past few days.

CrowdTangle, a social media monitoring tool, counts over 400 posts mentioning Marcos and the Pope together in the past week, which have garnered a collective 41,900 interactions.

— Franco Luna with a report from Kristine Joy Patag