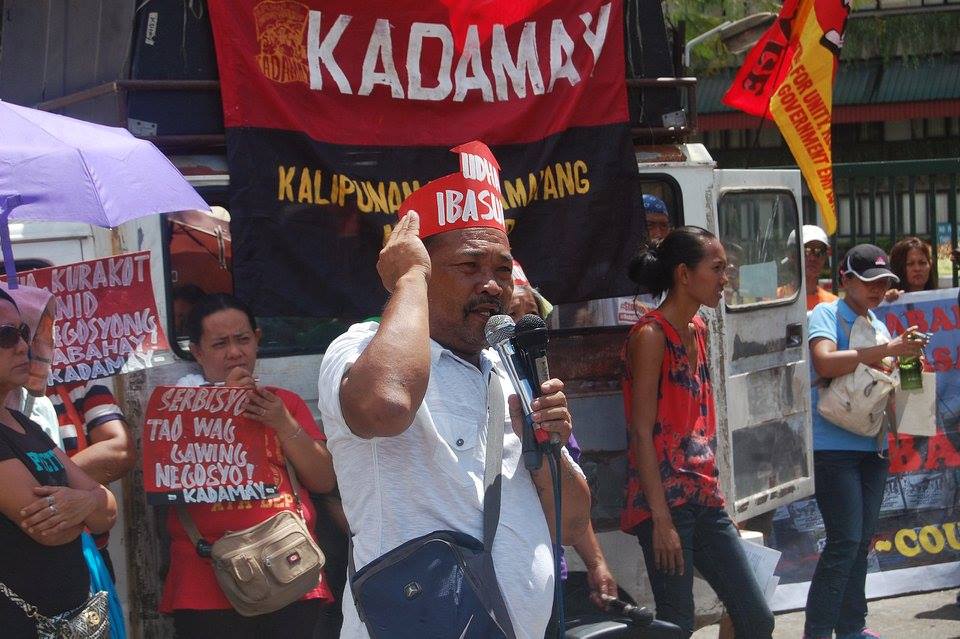 Carlito Badion, known for his indubitable courage, was an effective urban poor leader because he knew poverty like the palm of his hand.

MANILA – “Retreat first,” Carlito Badion told the ground commander of the Philippine National Police during one of the demolition attempts at sitio San Roque in Quezon City some years ago.

This was how Chester Arcilla, an academic who was doing his immersion in urban poor communities for his research, remembered the late Kadamay secretary general.

In a gathering of Kadamay members and allies Saturday afternoon at the Commission on Human Rights, Arcilla said he was amused as Badion, the command of the barricade, faced the phalanx of policemen with shields and batons. Badion, who limped and leaned to one side while walking due to polio, led the residents in defending their right to stay in their shanties amid threats of eviction.

“I asked myself where did his courage come from. His courage came from his belief that the masses can stand up to police violence,” Arcilla said.

That kind of courage he spread and grew in the cities’ slums.

Estrelita Bagasbas, one of the known leaders of San Roque, said she was mentored by Badion, whom they fondly called Ka Karletz.

During Badion’s early visits to their community, Bagasbas admitted she would hide from him.

“He would always scold me for being hesitant and shy. He would tell us, ‘I will stop going here so you’ll learn how to stand up and fight even without me,’” Bagasbas said. “It is you, residents of San Roque, who should be staunchest in defending your community,” Bagasbas recalled Badion as saying.

And Badion did what he said. Bagasbas and the others were compelled to step up. Today, Bagasbas proudly proclaimed that they established new Kadamay chapters.

“There are now many Karletz,” she said, teary-eyed.

Protesters light candles in honor of Badion & as a symbol of their call for justice pic.twitter.com/fRPZSbUqt2

Badion was found dead near the Pagsanga-an River in Ormoc City on May 28. For years, Badion eluded suspected state agents tailing him. At the height of the occupy idle government housing campaign in Pandi, Bulacan, no less than President Duterte said that should the urban poor decide to do it again, “my order is for government forces to drive you away. Either they will strike you with clubs, or if you resist, I will have them shoot you down.”

Lea Maralit of Kadamay-Bulacan recalled four men looking for Badion in Pandi, where idle housing units were occupied by urban poor. She said Badion, whom she called Tatay, bid them goodbye one day, saying he had to take security precautions.

Like Bagasbas, Maralit learned the ropes from Badion. She recalled first seeing him in August 2016, while they were campaigning for access to water and electricity for the relocation site in Pandi.

“I was drawn to him because he was such a good speaker,” Maralit said. “We had been ignored by various government agencies. He accompanied us to the municipal hall and I did not realize I was already joining my first rally,” she said, smiling.

Badion was also the one who pushed Maralit to become a good leader. “He would always tell me to speak from the heart, to speak from my own experiences,” Maralit said.

Badion’s being easy-going endeared him even more to those he organized.

Maralit described Badion as “kengkoy” (funny) to the point of making fun out of his being limp. “He would exaggerate his difficulty in walking properly and insisted on going to that hilly part in Pandi,” Maralit said.

Arcilla recalled that even in tense situations like demolition, Badion would still manage to crack a joke.

True leader of the masses

Badion was an effective Kadamay leader because he knew poverty like the palm of his hand.

Badion was a worker at a garments factory. He survived the Payatas tragedy, or the incident on July 10, 2000 when a mountain of garbage collapsed in barangay Lupang Pangako in Payatas dump, burying alive more than 300 residents.

He was among those who relocated in Montalban (now Rodriguez), Rizal. The miserable situation there made him join campaigns for the assertion of their rights and welfare. It was here when he became an active member of Kadamay.

ATM. Kadamay pays tribute to urban poor leader Carlito Badion who was gunned down on May 26. pic.twitter.com/LeZryRjmsL

Years later, in 2012, Badion was elected Kadamay secretary general. He was instrumental in the formation of Alyansa Kontra Demolisyon, which led barikadang bayan (people’s barricade) in communities.

Pandong Rubis said the Plastikan community in Commonwealth was able to weather demolition threats due to Badion’s guidance. The community literally lives on plastic materials, which they collect and sell to junk shops.

“He taught us that even though we’re poor, we have rights, too,” Pandong said during the tribute to Badion.

His commitment to the cause of the poor made him a target of different forms of harassment by state security forces. His wife Marites was dead worried about his security.

“It was what he wanted to do, to serve the people,” Marites said, adding she still could not accept that her husband is gone.

His daughter Esther Ann misses her Papa so much she still cries every night. “I’m really my Papa’s girl. I know how much he loved me,” she said.

No matter how busy he was, Badion would always attend to the needs of his only child. Badion personally sewed Esther Ann’s pink gown for her debut. They had a simple celebration at the Kadamay office.
“He would have wanted to accompany me on stage for my graduation,” Esther Ann, who expects to finish her course this year, said. “That won’t happen anymore.”

Still, Esther Ann said she knows that her Papa wants her to be strong.

For Maralit, Bagasbas and Rubis, Badion’s life is a shining example they wish to emulate.

Now that the Pandi community is confronted with heightened harassment from state security forces, Maralit admitted she also feels afraid. “I draw inspiration from Tatay, who would always tell me to trust in the masses, that there is nothing we could not win if we are united.”

Badion’s courage is supplanted in communities, never to be extinguished by the enemies of the downtrodden.