He ‘should be ashamed of himself’: Remulla scores Parlade 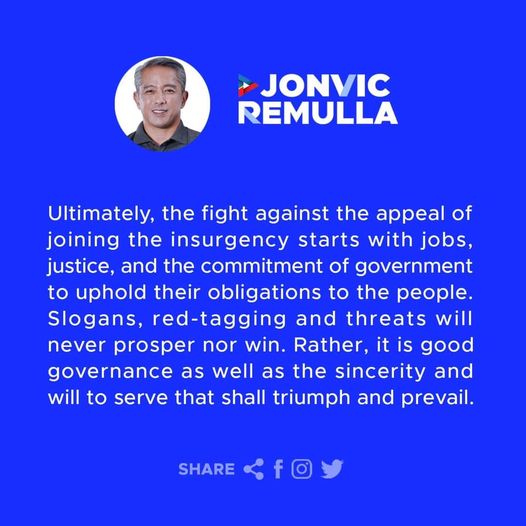 Cavite Governor Jonvic Remulla said this Monday as he blasted the military official for supposedly accusing Manila Mayor Isko Moreno of being a “sympathizer” of “terrorists” and for warning female celebrities against engaging with women’s group Gabriela.

“Threatening progressive and outspoken WOMEN who want to encourage a stronger feminist culture? That does NOT make them co-conspirators nor allies of the left wing,” Remulla said on Facebook.

Remulla issued these remarks online as he expressed alarm over the alleged “red-tagging” activities within the ranks of the military.

Earlier, Parlade questioned why Moreno ordered the removal of tarpaulins declaring the Communist Party of the Philippines, New People’s Army, and the National Democratic Front (CPP-NPA-NDF) as “persona non grata” or unwelcome persons.

But Remulla warned that if similar posters were to be put up in Cavite, he would make sure to have them taken down immediately.

“Let me assure you that if you or any of your men put up any posters in the Province of Cavite, they will NOT last a day!” Remulla said.

“I will personally lead the effort to tear your propaganda posters down…Brand me a communist if you will but it is my sworn duty to defend Cavite’s record in holding the insurgency at bay,” he added.

Remulla also disclosed that over the weekend, a speaker supposedly from the National Task Force to End Local Communist Armed Conflict (NTF-ELCAC) tagged several groups and activists during the Strengthened Alliance on Fight Against Illegal Drugs and Terrorism (SAFER) Cavite webinar.

Remulla further clarified that while he has these concerns, he is “not a believer in communism.”

“[N]or do I sympathize with them. I think it is a failed ideology that has become irrelevant in today’s modern world,” he said.

According to Remulla, Cavite was the first province in the Philippines awarded as “insurgency free” by several branches of the national government.

“Militant Labor Unions have never appealed to the workers of Cavite simply because the Local Government has made it a point to intervene if there are any abuses by employers,” he said.

“Collectively, the leadership of the Province from my father’s time until the present [has] made good governance not just a priority but as an effective weapon against communist insurgency,” he added.