Health workers mourn death of colleague who died of COVID-19 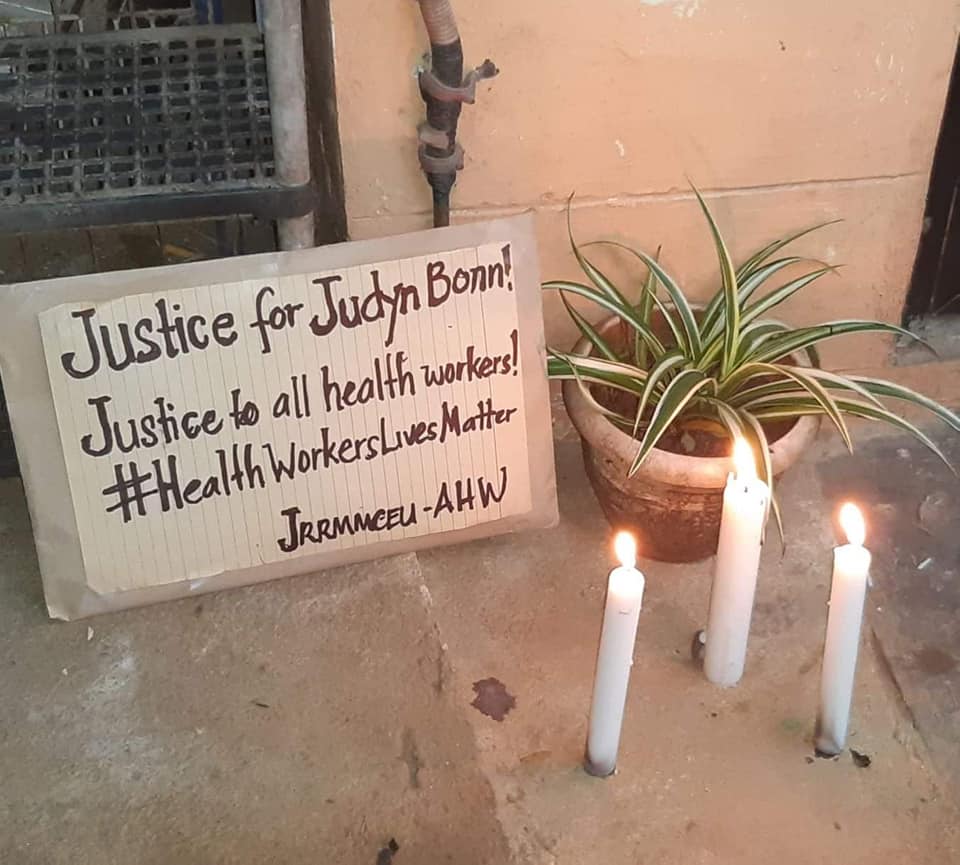 Alliance of Health Workers (AHW) union members in private and public hospitals lit a candle for Judyn Bonn Suerte, a union leader from the Jose Reyes Memorial Medical Center (JRRMMC) who succumbed to the virus on July 31.

MANILA – Members of health union alliance are mourning the passing of their colleague due to coronavirus disease 2019.

Alliance of Health Workers (AHW) union members in private and public hospitals lit a candle for Judyn Bonn Suerte, a union leader from the Jose Reyes Memorial Medical Center (JRRMMC) who succumbed to the virus on July 31.

According to the group, Suerte and his wife are among the 20 JRRMMC health workers who are infected with COVID-19.

The group expressed indignation over the increasing number of health workers being infected by COVID-19 and the government’s neglect and incompetency. Based on the data from the Department of Health, there are 4,823 infected health workers and 38 already died.

Cristy Donguines, president of the JRMMC Employees Union-Alliance of Health Workers (JRRMMCEU-AHW) said they are saddened but angered at the same time of what happened to their colleague and other health workers who died fighting COVID-19.

“This administration does not value health workers. He did not even lay down comprehensive, systematic and scientific measures on how to curb the virus during his State of the Nation Address,” Donguines said.

Robert Mendoza, AHW president, honored their fellow health worker who “faithfully and courageously carry out his sworn duty, even at the point of risking his own life.”

Suerte left behind his wife and three children.

“While we are honoring him, we also denounce the injustice done to him. When he was already in a critical condition, the hospital abandoned its obligation and transferred him to Dr. Jose N. Rodriguez Memorial Hospital,” Mendoza said.

While the DOH protocol was to transfer all employees admitted to their respective hospitals with severe COVID-19 cases to any designated exclusive COVID-19 referral hospitals, the group said JRRMMC hospital could have treated its own employee.

Mendoza slammed the DOH for its inaction on the grievances of health workers. He said health workers from the San Lazaro Hospital, National Kidney and Transplant Institute and Lung Center of the Philippines have protested about their dire health, safety and working conditions but their demands have fallen on deaf ears.

Mendoza said Suerte was among the many health workers who actively called for their protection against the virus, free mandatory and regular swab testing to all health workers.

The group also conducted simultaneous red armband wearing as a tribute to all health workers who died fighting the virus in this time of commemoration of the Year of Filipino Health Workers.

They will also also hold nine days of candle lighting and series of actions for their campaign called #HealthWorkersLivesMatter.

The post Health workers mourn death of colleague who died of COVID-19 appeared first on Bulatlat.