International solidarity organizations in Europe condemn murder of peace advocate Randall Echanis, vow to continue his work for justice and peace in the Philippines 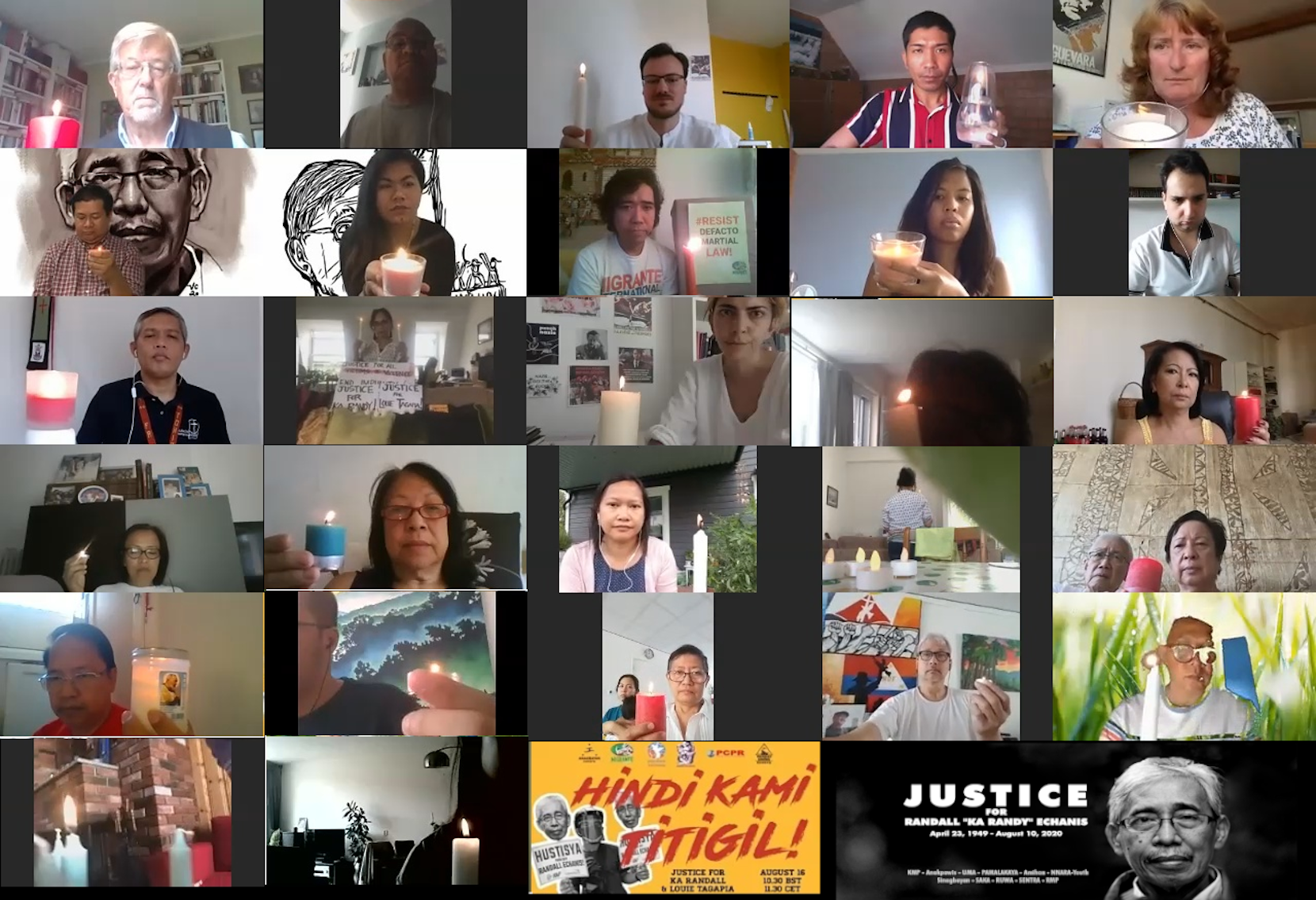 “I would like to join in condemning the barbaric murder of comrade Randy Echanis and to offer my condolences to his family, comrades and friends. The murder of Ka Randy extends the blood trail drawn in recent months by the massacre of leaders and representatives of the mass movement in Philippines. The blood of Ka Randy and other martyrs/victims fall on the criminal Duterte regime and the imperialists of which it is a servant to,” Italian activist Alesso Arena of the Fronte Populare in Italy and International League of People´s Struggle (ILPS) said in the online tribute.

Arena met Echanis at the peace talks meetings held in Rome where he came to hear him speak about his work on genuine agrarian reform issues and mass work in the Philippines.

Norway´s Red Party and representative of the Filipino Resource Center in Oslo, Arnljøt Ask also expressed outrage at the murder of Echanis and blamed the act solely on the Philippine government. “I can see that the fascist Duterte regime gave priority to murder this man instead of taking him to prison like Marcos and other presidents. This consistent, honest and persuading, social activist, peasant leader and peace advocate gathered support in broad circles. A killer like Duterte could not put up with that, he therefore opted to silence him.”

He also said that the dastardly act against Echanis has eroded the international community´s trust in President Rodrigo Duterte.

“Duterte´s time is vanishing. His credibility to be part of addressing political solutions over the big conflict in the Philippines has crumbled. He has to be defeated by the Filipino people and their organizations as well as the international solidarity movement all over, “ he added. Ask revealed he only met Echanis once at a peace talk meeting in Oslo but he said he emembered his “friendly” and “determined” face.

Norway serves as the third party facilitator to the peace talks between the Government of the Republic of the Philippines (GRP and the National Democratic Front (NDF) and most of the meetings were held in Oslo.

condolences to Echanis´comrades and family in the Philippines and paid tribute to his contribution to the people´s struggle.

“With comrade Ka Randy in our hearts and minds, we will remember his genuine commitment to the

Filipino people, the revolution and his special contribution to the struggle for genuine agrarian reform.

We will remember Ka Randy like so many other comrades who had been in prison several times and he was never afraid to make the sacrifices in order to defend the people,s democratic revolution,” Koning told fellow activists and peace advocates in the online protest.

At some point in his tribute, Koning was fighting back tears and his voice quivered with emotions.

From Luxembourg, Julie Smit of the People´s Coalition for Food Security exhorted solidarity organizations and comrades in Europe to support the Filipino people in their struggle for peace and justice in the Philippines.

“We need to turn outrage, this grief we have, into action. It is all we can do to continue the work of Ka Randy, to continue to fight, to support the filipino people and to fight for justice so that we can arrive at the rainbow´s end,” Smits said in the online tribute.

“These people who have given their lives, they earn our deepest respect. I think it is our responsibility who are living to continue doing what we can to expose, the violent repression that is pretty escalating now under the Duterte administration,” she added.

Smits worked for 20 years in the Philippines for a Luxembourg NGO working on peasant issues and joined the solidarity movement for the Philippines after her stint in the country.

The online parangal also featured videos of the late peace advocate´s life and struggle with the Filipino peasant organizations and his role in the peace advocacy in Europe as consultant on social and economic reforms to the National Democratic Front´s Negotiating Panel in the peace talks. His favorite song, “Moon River” as revealed by his wife, Linda Lacaba was also played in the tribute with tears shed in his memory by those who were at the event.

The participants also lit candles in the memory of Echanis and a two-minute of silence was observed.#

The post International solidarity organizations in Europe condemn murder of peace advocate Randall Echanis, vow to continue his work for justice and peace in the Philippines appeared first on Migrante Europe.