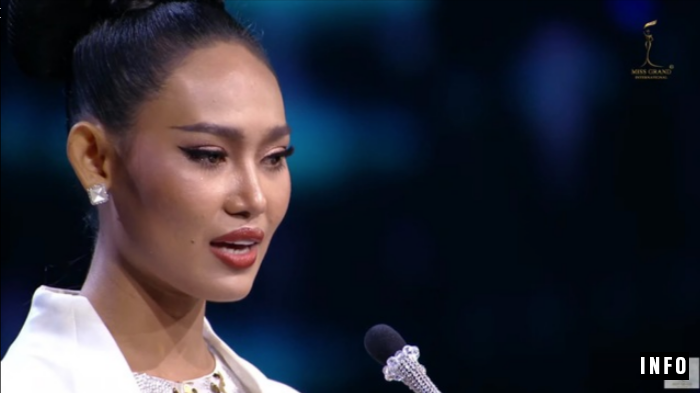 Amid the glitz and glamor of the Miss Grand International 2020 coronation night, Myanmar candidate Han Lay took the stage to speak about the worsening situation in her country.

Myanmar is currently experiencing a crisis of democracy, after the military took control of the country on February 1, detaining elected leader Aung San Suu Kyi and other members of the National League for Democracy.

Since then, the country’s citizens have taken to the streets to protest the military takeover, with nearly 400 losing their lives since the coup.

On March 27 – the same day as the pageant – 64 people were killed by Myanmar’s security forces, including a young boy.

“It is very hard for me to be able to stand on stage tonight,” Han Lay said, in a solemn moment in between pageant events.

“Today in my country Myanmar, why I am doing a speech on this stage, there are so many people [who have] died,” she said, tearing up. “I deeply feel sorry for all the people who have lost their lives.”

She went on to say that as her people walk the streets for democracy, she stands on the stage to call for democracy as well.

“Please help Myanmar. We need your urgent international help right now,” she said. She also urged people around the world to help find a solution to their problem.

“Let’s create a better world…may the world be at peace with Myanmar.”

She ended her speech by singing part of Michael Jackson’s “Heal the World.”

It is not the first time that the beauty queen has raised awareness on the violence in Myanmar. In previous posts on her social media, she shared a fundraiser for Myanmar’s Civil Disobedience Movement, which leads non-violent protests against military rule.

She also shared a tribute to those who have been killed, and posted information on the arrests of protesters, including some of her fellow students at Yangon University.

Han was among the Top 20 in the pageant, which saw USA’s Abena Appiah take home the crown. – Rappler.com