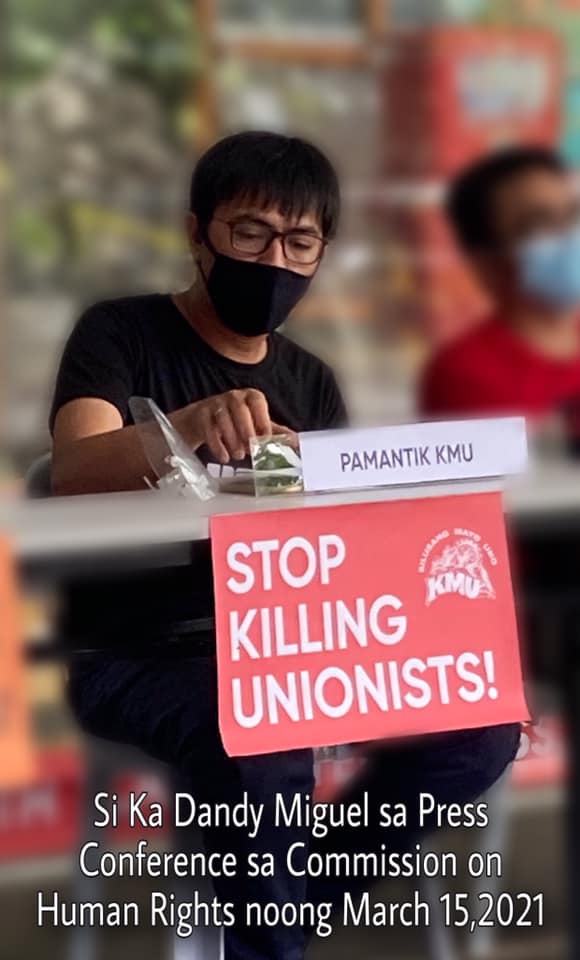 PAMANTIK-KMU vice chairperson Dandy Miguel is killed 3 weeks after the ‘Bloody Sunday’ raids in Calabarzon. He earlier told Rappler that he feared for his safety amid the killings of activists.

A union leader and longtime labor rights activist was killed in the province of Laguna on Sunday, March 28, 3 weeks after the “Bloody Sunday” raids that left 9 activists dead in the Calabarzon region.

Calamba City Police said Dandy Miguel was gunned down by a still unidentified man while riding his motorcycle in Barangay Canlubang around 8:45 pm.

He was dead on the spot, police told Rappler in a phone call.

He was also the president of Lakas ng Nagkakaisang Manggagawa ng Fuji Electric-OLALIA-KMU and a national council member of Kilusang Mayo Uno, according to the group.

Miguel’s killing comes less than a month after the March 7 crackdown by police and soldiers that led to the deaths of 9 activists in Calabarzon, the highest number of fatalities in a single incident in the region, according to the Commission on Human Rights (CHR).

Members of PAMANTIK-KMU have been constantly tagged as communist rebels, Miguel told Rappler in an interview on March 9, after the “Bloody Sunday” crackdown.

He also told Rappler then that he feared for his safety as killings were happening left and right.

Karapatan Southern Tagalog spokesperson Kyle Salgado told Rappler in an earlier interview that there are reports of labor issues in the various economic and industrial zones in the region.

CHR data, meanwhile, showed that 130 activists have been killed under the Duterte administration as of March 7.

(Is murder a gift to Duterte for his birthday? Should we expect more killings and arrests as ECQ returns?)

Sunday was President Rodrigo Duterte’s 76th birthday. It was also the eve of the Greater Manila Area’s return to enhanced community quarantine as Filipinos face a worsening COVID-19 outbreak. – with reports from Jairo Bolledo/Rappler.com