Not only Marikina and Rizal: Isabela submerged, too; appeals for aid 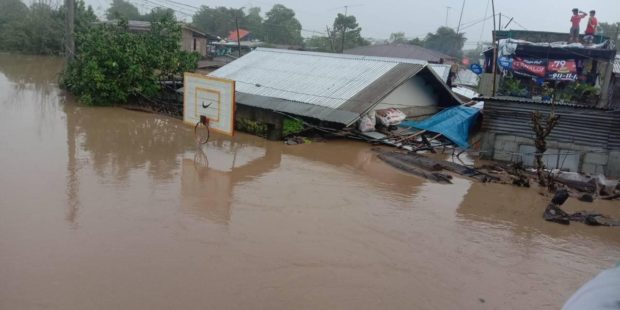 MANILA, Philippines — Residents of Sta. Maria town in Isabela province have called on the government for assistance as they also experienced massive floods due to Typhoon Ulysses.

Photos sent to INQUIRER.net by Ronald Gatan, a resident of Barangay Quinagabian in Sta. Maria showed waters already reaching up to the second floor of their house, forcing them over the rooftop where they might spend their Friday night.

Gatan, however, said he actually thinks his family is doing better because they can stay on the rooftop; he thought of neighbors whose single-story houses were completely inundated by the flood.

Still, he worried because their food supply is running thin.

(As of now, we are running out of stock, they haven’t given any relief goods.)

He said the local government advised them that flooding might occur, but they did not expect such immense flooding — especially that water never reached as high as it did now than in the previous storms.

(As of now, we are doing better than others because we are on the rooftop and this is quite high. Other residents were rescued and brought to evacuation areas.)

(But for other low houses, all of their things were submerged. The government issued a warning but they didn’t expect that the flood would be this huge.)

Reports of flooding in Cagayan Valley, particularly in Isabela, comes amid reports that flood has started to recede in other areas like Southern Luzon, Central Luzon, and Metro Manila, including Marikina and some parts of Rizal province – all of which received Ulysses’ violent winds and torrential rains.

Some residents believe that the flooding was caused by the release of water from the Magat Dam, which was forced to the spilling level due to rains brought by Ulysses.

Magat Dam is situated on the Magat River, a major tributary of the Cagayan River.

Data from the Philippine Atmospheric, Geophysical and Astronomical Services Administration (Pagasa) showed that seven of Magat Dam’s floodgates have been opened to discharge water.  Pagasa said Magat Dam’s outflow was the highest among the country’s dams at 5,073 centimeters.

Despite the large amounts of water released from Magat Dam — from just 989 centimeters on Thursday to 5,073 centimeters on Friday — the dam’s water level only receded to 192.7 meters.

This is only 0.30 meters shy of the dam’s normal high level.

While Ulysses’ wrath covered almost the entire Luzon region, much of the aid appeared to have been focused on Marikina and Rizal as some of its areas are densely populated.#