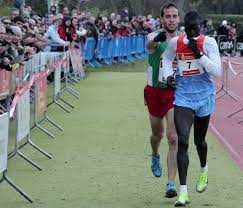 When we’re forced to make a split-second decision, our true colors are often on full display.

Ivan Fernandez Anaya showed his character on a race track in Navarra, Spain, and in the process he wound up showing the world what true sportsmanship looks like! Ivan is a long-distance running from Spain who competes in cross country and marathon races.

Ivan was just about to finish a cross country race when he noticed Abel Mutai, a Kenyan athlete who’d been in the lead, began to slow down as he approached the finish line. Abel did not speak Spanish so he got confused by the signs and thought he had already won. Ivan saw what was happening in an instant and could have easily darted past his opponent to win the race himself. Instead, he slowed his own pace and pointed Abel towards the real finish line so he could win.

“He was the rightful winner,” Ivan said later. “He created a gap that I couldn’t have closed if he hadn’t made a mistake. As soon as I saw he was stopping, I knew I wasn’t going to pass him.”

Everyone who witnessed the race was rightfully impressed with Ivan’s actions! He didn’t hesitate to do the right thing, proving that being a good sport is still one of the most important aspects of sports. Later, a journalist asked Ivan why he didn’t take the opportunity to win the race and he laid out his reason for doing the right thing.

“My dream is that someday we can have a kind of community life,” he answered simple. When pressed and reminded he was seconds away from winning the race himself, he told the journalist, “But what would be the merit of my victory? What would be the honor of that medal? What would my Mom think of that?”

We’re sure Ivan’s mother is very proud of her son’s actions on the track that day! What a wonderful reminder that victory is sweetest when it’s earned.