Rage and fury over cop’s killing of mother and son: ‘No license to kill’ 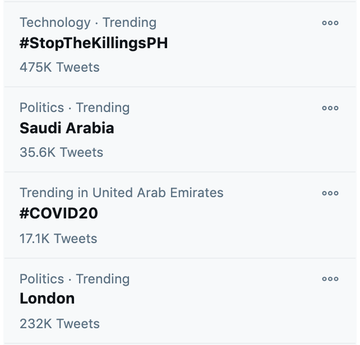 What quiet Christmas? Filipinos watch in shock the killing of a mother and her son

The police killing of a mother and her son in Paniqui, Tarlac, on Sunday, December 20, sparked anger online as Filipinos prepared for their Christmas week.

Nuezca’s daughter also witnessed the killings, as the video showed. Nuezca is officially assigned in Parañaque but is from Paniqui.

Calls for justice were amplified even outside the Philippines. With almost half a million tweets, the hashtag #StopTheKillingsPH was among the top trends in Singapore and Dubai as of 1 pm. #JusticeForSonyaGregorio ranked third in Singapore trends with 265,000 tweets.

In this latest crime committed by a police officer, enraged citizens again questioned the police’s mandate of protecting Filipinos from crime.

“Who do you call when the police murders?” Filipino netizens ask – a question that resonates with many parts of the world that have suffered from police brutality and are campaigning to reform, defund, or completely abolish the police force.

Many connected the crime to the climate of fear and impunity under the “bloodstained administration,” blaming President Rodrigo Duterte himself.

Allegations of human rights abuses and killings hound the Duterte regime, and the police have been at the forefront of a bloody war on drugs.

Contributing to the climate of fear, Duterte’s rhetoric “may have incited violence and may have had the effect of encouraging, backing or even ordering human rights violations with impunity,” said the United Nations Human Rights Office in a recent report.

Many netizens are saying that the police shooting in Tarlac is not an isolated case, but a reflection of lawlessness.

Why not abolish the PNP?

It is a chronic violator of human rights. It is also the biggest criminal syndicate in town.

As coercive apparatuses of a particular political and socio-economic system, police and military forces are the only agencies legally permitted to use violence and force in preventing citizens from violating that system’s laws and regulations.

With that power comes great responsibility as well as immense potential for abuse. The challenge then is for policemen and soldiers to develop the extraordinary fortitude and integrity to remain upright.

This challenge is made extremely difficult in a political system dominated by foreign and elite interests, and where corruption and patronage is the name of the game. The police, as the servants and protectors of that flawed system, will necessarily end up just as rotten as the corrupt and abusive politicians and operators that run it.

In the first part of this two-part series, we saw how after more than a century of serving colonial masters, local dynasties and oligarchs, and after experiencing absolute power under martial law, today’s Philippine National Police (PNP) has become hopelessly mercenary and criminal. It has developed its own internal mechanisms to make use of the oppressive and corrupt systems of governance to keep its own masters in power and enrich its own set of elites – officers coming almost entirely from the Philippine Military Academy (PMA).

Far from its motto “To serve and protect,” the PNP has become a tool to  oppress our own people and repress their social and democratic movements. From gunrunning, drug trafficking, kidnap for ransom, prostitution rings, protection rackets to illegal gambling operations, it’s like SM – they’ve got it all.

Abolition as an option

Of late, there have been efforts to strengthen the PNP’s internal checks and balances, with Senator Panfilo Lacson suggesting that PNP Director General Ronald “Bato” de la Rosa handpick 100 of his most trusted men to cleanse the ranks. It’s not that these things have not been tried in the past. It’s just that they eventually fail.

The most radical suggestion I’ve heard to reform the PNP is to fire all officers from senior superintendent up to director general. But that would still fail to address the deep-seated, systemic problems of the police force and will only give rise to a new breed of corrupt officials.

Sometimes, the only way to fix a problem is to get rid of it.

Abolishing the PNP will mean firing everyone, from General Bato to the lowliest PO1 de la Cruz. This is the ultimate strategy to dismantle the deeply entrenched mafia and corrupt power structures in the PNP.

This will also mean creating a new police force from the ground up, with new policies, structures and mechanisms to prevent the new police from getting to where it is now.

This new police agency will have to steer clear of the PNP’s long history and tradition as a mercenary military and para-military institution. It should be truly civilian in character, community-centered in its function, professional and fully transparent and accountable to the public in its operations.

The following conditions would probably be crucial in creating such an agency:

As with most sweeping reorganizations, the challenge is how to accomplish this in the swiftest but least disruptive manner. This is a matter probably best left to organizational experts.

Abolition in the context of social reforms

Of course, whatever benefits can be had from the abolition of the PNP and the establishment of a new police force can be easily undermined or squandered by the very same corrupt politicians, power brokers and criminal protectors that have benefitted from the old system.

Thus, the PNP’s abolition should be done in the context of more comprehensive reforms to democratize the country’s political structure and culture as well as institutionalize mechanisms for transparency and accountability. This would include electoral reforms, a strong law protecting whistleblowers, a freedom of information act covering all branches of government, the abolition or reduction of political dynasties, and a radical cleansing of the judicial system, among others. Without these, a newly formed police force will surely succumb to the old ways.

There are two opportunities in the horizon for such sweeping changes – the proposed shift to a federal system of government proposed by Pres. Rodrigo Duterte, and the ongoing negotiations between the government and the National Democratic Front of the Philippines (NDFP) for a comprehensive agreement on political and constitutional reforms. Taken jointly or separately, these opportunities for political reform can be the avenue for the police force’s much needed overhaul.

It goes without saying that the public, particularly the progressive social movements, will play a crucial in this project as time and time again, we have seen how the traditional wielders of power have hijacked previous efforts to reform the system. – Rappler.com

(Teddy Casiño served as the partylist representative of Bayan Muna for 3 terms, from 2004-2013. Prior to his stint in Congress, he was secretary-general of the Bagong Alyansang Makabayan and was a columnist for BusinessWorld. He earned his degree in sociology from the University of the Philippines at Los Baños in 1993.)