The real war, the bigger enemy 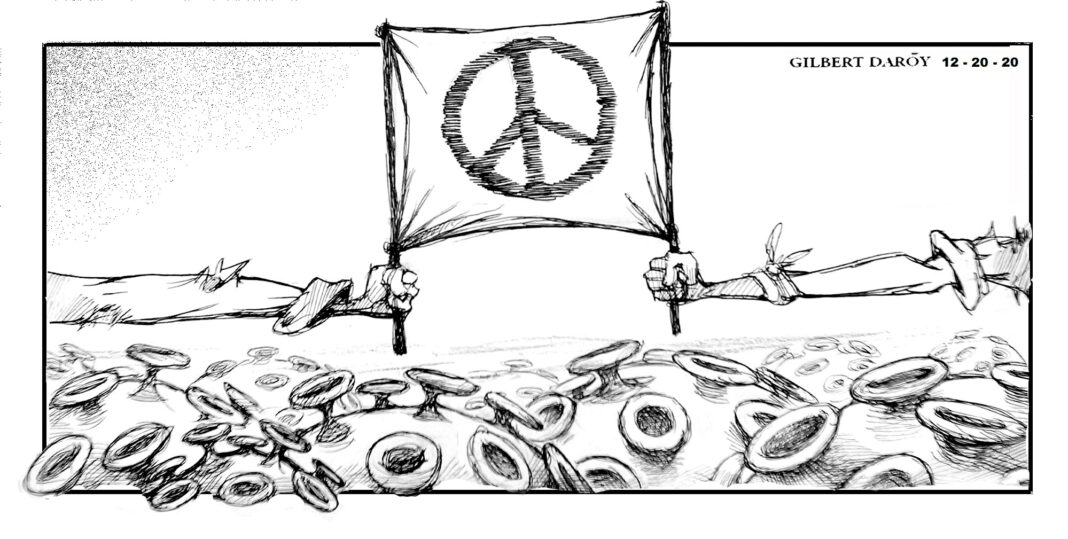 It’s an old story that has been retold so often it’s become something of a cliché.

As The History Channel tells it, “at the first light of dawn on Christmas Day (in 1914), some German soldiers emerged from their trenches and approached the Allied lines across no-man’s-land, calling out ‘Merry Christmas’ in their enemies’ native tongues. At first, the Allied soldiers feared it was a trick, but seeing the Germans unarmed they climbed out of their trenches and shook hands with the enemy soldiers. The men exchanged presents of cigarettes and plum puddings and sang carols and songs. Some Germans lit Christmas trees around their trenches, and there was even a documented case of soldiers from opposing sides playing a good-natured game of soccer.”

The night before, the troubled air around the trenches of World War I resounded with the voices of soldiers singing Christmas carols across the lines, “and at certain points the Allied soldiers even heard brass bands joining the Germans in their joyous singing.”

A German lieutenant would recall later: “How marvelously wonderful, yet how strange it was. The English officers felt the same way about it. Thus, Christmas, the celebration of Love, managed to bring mortal enemies together as friends for a time.”

Yes, only for a time. The unofficial Christmas truce of 1914 was never repeated through the years of World War I, and there are no tales surviving of similar moments of amity and quiet in the wars to follow.

Here in the Philippines, the communist insurgency and the armed response, which has lasted for over 50 years, the longest such conflict in this part of the world, has been marked around this time of the year with ceasefires that last from a few days before Christmas to shortly after New Year. While there are no documented cases of New People’s Army (NPA) fighters and soldiers and police approaching each other in brotherly embraces, the ceasefire period is at least marked by quiet and an easing of tensions.

But from time to time, stories emerge of ambushes and killings that disrupt the fragile peace of the time. And the latest of such incidents, apparently, were enough for President Duterte to declare that not only would there be no ceasefire this year, there would be no more such attempts at temporary peace until the end of his term.

“There will be no ceasefire ever again under my term (as President),” the President declared in a weekly address to the nation. “For all intents and purposes, the ceasefire is dead. Wala na ’yun, matagal na ’yun.”

The declaration follows on the heels of the military’s announcement that it would not recommend a ceasefire this Christmas season with the CPP-NPA. An official statement accused the insurgents of violating their own ceasefire declarations, which it said shows the insurgents’ “incapacity for sincerity.” The military then accused the CPP-NPA of using the ceasefire to strengthen their organization. “They venture on peace talks only to give themselves the chance to regroup, refurbish, recruit new members, and recoup their losses. And with these many hard lessons of the past, we will not allow them to trample upon our people’s bona fide desire for peace—not this holiday season—not until we have decisively defeated this menace to society.”

It is of course expected for the military and police, and by extension the President himself, to refuse to allow the communists any opportunity to beef up their ranks and strengthen their own capacity to continue their armed campaign.

But the intransigence and hostility even to the mere possibility of talking peace and calling for a brief lull to the fighting come at an unfortunate time. We are in the middle of a pandemic that has killed thousands of fellow Filipinos, along with more than a million around the world. Logic and simple humanity demand that at such a challenging time, all our resources, our capabilities, our attention, and our care be devoted to protecting the vulnerable, treating the sick, and comforting the orphaned and grieving. Then there is the economic disaster that the lockdowns and quarantines, the isolation and social distancing, have caused, leading to a catastrophic economic and social disaster. Our attention cannot be diverted any further.

And yet, ever since the administration’s firmly shutting the door to any talk of peace, the country is seeing an escalating campaign against suspected communist leaders and sympathizers, labor and community organizers, media folk and outspoken individuals. Then, too, are the unabated assassinations and summary killings, most recently those of a doctor and her husband, who was the sole caregiver serving the health needs of her city.

We are in the midst of a war. The enemy is not found in trenches across a frightening no-man’s-land. The enemy is unseen and unheard, but just as lethal and more stealthy. Would not a Christmas ceasefire between the armed partisans of a different conflict better help focus our efforts toward the real war, the bigger enemy?#