RITM, the missing piece in the Philippines’ mass testing capacity vs. COVID-19

The decrease in the RITM budget is also coupled with the decline in the allotment of other related health concerns, such as the Epidemiology and Surveillance Department, with a 40-percent drop from P247 million in 2019 to P101 million this year. Since 2015, no additional isolation rooms have been built.

Related story: What is RITM?

MANILA – Three months into the lockdown, health advocates are enraged with the absence of a comprehensive plan to curb the spread of the COVID-19. Just recently, the Philippine government recently passed on its duty to conduct mass testing to private companies.

Mass testing, per the experience of many countries also confronting the virus, proves to be the first step in stopping its spread. To date, the Philippines has surpassed its 14,000-mark of confirmed COVID-19 cases. But the government’s own data revealed over 4,000 samples in the backlog and a testing capacity of about 8,277 tests daily as of May 23, 2020.

This is in stark contrast with Philippine government’s plan to have a testing capacity of 30,000 a day by the end of the month. It does not help, however, that majority of the testing centers are located in Metro Manila, with scientists saying that the Philippines has instead “reached the ceiling” of its testing capacity instead of flattening the curve.

Read: Without mass testing, PH not flattening the curve – scientist

A missing piece in the public discourse is the big role that the Research Institute of Tropical Medicine (RITM) could have played in the country’s fight against the virus if only it was not left with limited funding.

The RITM, along with the Philippine General Hospital, was designated to serve as the COVID-19 referral center in the National Capital Region as the country continues to prevent the spread of the deadly pandemic.

Starting March, 16, the RITM has suspended its other services as they refocus their “available manpower and resources to augment the needs of the ongoing COVID19 response.”

The RITM’s Surveillance and Response Unit, which was formed in 2013, was hailed for its significant role in the surveillance efforts of both emerging and re-emerging diseases of the health department and the WHO. The unit, along with the Epidemiology Bureau, had its “baptism of fire” during the MERS-CoV outbreak.
http://ritm.gov.ph/ritm-surveillance-and-response-unit/

Budget over the years

For the past decade, the budget allocation for RITM’s capital outlay amounted to P137.3 million. This is a far cry to the military’s P1.7 billion capital outlay for this year alone.

Retired RITM employee Edgardo Damicog, in an earlier interview with Bulatlat, said this resulted in the stunting of RITM’s potential.

Under the Duterte administration, there has been a sharp decrease in the maintenance and operating expenses of the RITM.

In its 2015 report, the RITM said it has a negative pressure facility with six isolation rooms. Damicog said the construction of these isolation rooms were part of the “lessons learned” from the country’s response to SARS. But no additional isolations rooms were built since then.

The decrease in the RITM budget is also coupled with the decline in the allotment of other related health concerns, such as the Epidemiology and Surveillance Department, with a 40-percent drop from P247 million in 2019 to P101 million this year. 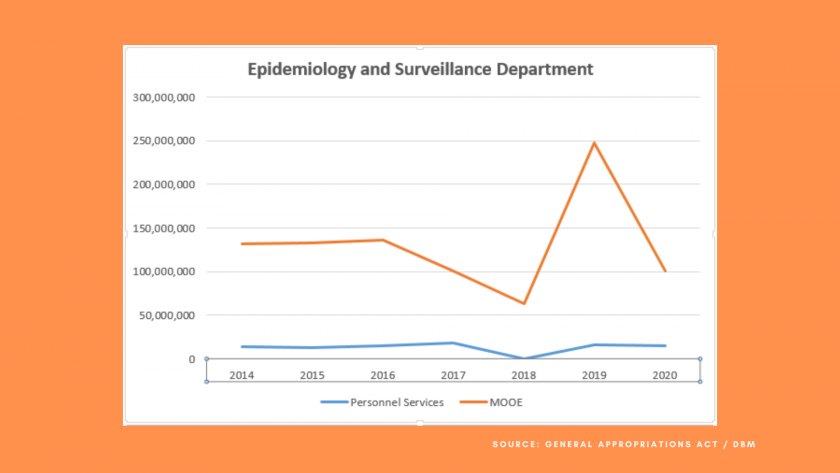 The state neglect of RITM has been highlighted by the conditions of its employees. More than 40 RITM health workers tested positive for COVID-19, forcing the state hospital to temporarily scale down its operations. This has resulted in a backlog of at least 5,000 specimens that were awaiting for confirmatory tests, while the institute still tried to maintain their then daily testing target of 1,500.

Garcia told Bulatlat in a previous interview that some of their colleagues have tested positive despite following safety protocols and minimal contact with patients.

Reneging on its responsibility?

Today, instead of strengthening the testing capacity of government institutions such as the RITM, the Philippine government has been banking on private companies to provide mass testing and to comply to minimum health standards as Filipinos return to the workforce with the easing of the lockdown.

The Philippine Red Cross, for one, has been conducting tests for health workers in public hospitals – with at least 90 workers per batch from the National Center for Mental Health, Tondo Medical Center, and the Philippine Orthopedic Center.

RITM health workers were tested every two weeks for free, the group added.

Robert Mendoza of the Alliance of Health Workers said, “We are so disgusted with government’s privatized response in dealing with COVID-19 pandemic while abandoning its state responsibility for health workers’ safety and people’s right to public health.”

Mass testing, he added, has never been done promptly.

Mendoza said, “DOH says that the curve has flattened but in reality it has no solid basis since large-scale of testing has not been performed. The number of tested is miniscule compared to the IATF’s two-million target.” (With additional research from Dawn Peña)

The post RITM, the missing piece in the Philippines’ mass testing capacity vs. COVID-19 appeared first on Bulatlat.