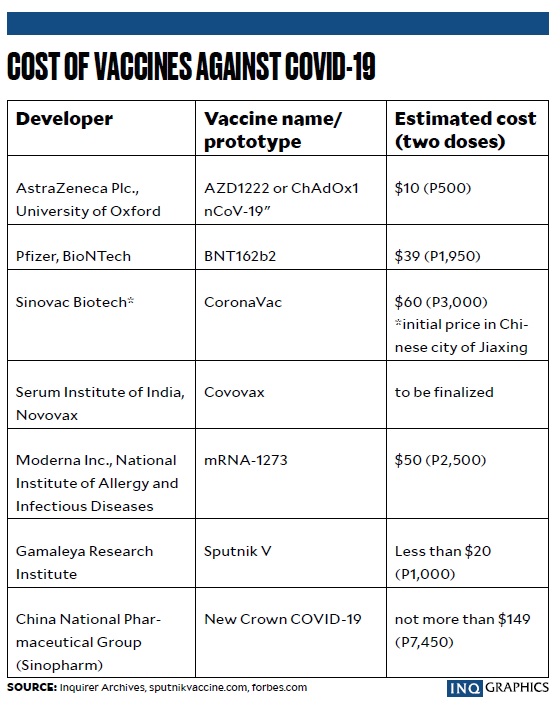 MANILA, Philippines — Sharp differences in the pri­ces of the Sinovac COVID-19 vaccine in the Philippines and neighboring countries smack of corruption, Sen. Panfilo Lacson said on Sunday.

CoronaVac, the vaccine developed by the Chinese pharmaceutical company Sinovac Biotech, costs as little as $5 per dose, or about P240, in other Southeast Asian countries, but may be priced at $38, or more than P1,800, in the Philippines, Lacson said.

“The difference in prices of Sinovac vaccine at $5, $14 and $38 reminds me of an old story about how corruption is committed in three Southeast Asian countries—UNDER the table, ON the table, and INCLUDING the table,” he said in a post on Twitter.

Vice President Leni Robredo, speaking in her radio show on Sunday, also pointed out the varying prices of CoronaVac, citing a statement of Dr. Tony Leachon, a former adviser to the Inter-Agency Task Force for the Management of Emerging Infectious Diseases, that the price of the China-made vaccine, as reported by a Thai newspaper, was $5 in Thailand and $17 (P817) in Indonesia.

Robredo asked the Department of Health (DOH) for an explanation.

During budget deliberations in November, the DOH told the Senate committee on finance that the price of the Sinovac vaccine was P3,629.50 for the two-dose regimen.

The head of the government’s vaccine program, Carlito Galvez Jr., later disputed reports about CoronaVac’s pricing, claiming it was actually lower than the prices of other brands and was in the middle among seven drug manufacturers being eyed by the Philippine government as sources of COVID-19 vaccines.

Galvez, however, refused to disclose how much Sinovac had offered the government, citing confidentiality agreements.

In a radio interview on Sunday, presidential spokesperson Harry Roque said that while officials were still not allowed to disclose how much the Sinovac vaccine would cost the government, he could say that it would be around P650—closer to the price in Indonesia.

“China’s prices are not like capitalist companies that are market-dictated. They can adjust their prices accordingly, depending on who is buying,” he said. “That’s why Beijing doesn’t want to announce its prices, because other countries that are not as close to them would find out they might have bought at a more expensive price.”

In a subsequent tweet on Sunday afternoon, Lacson took note of the Malacañang statement, saying: “If it’s true that [the] government is now dropping the price of [the] Sinovac vaccine from P1,847.25 per dose to only P650, the Senate has probably done our share to save our people billions of pesos in the country’s vaccination program.”

Netizens, too, “can pat themselves on the back” for their outcry, he added.

A senior lawmaker, who asked not to be identified for lack of authority to discuss confidential negotiations, told the Inquirer that the cost of the vaccine could be lowered for governments on two conditions: if the country agrees to clinical trials, and if the country has the capacity to manufacture the vaccine locally.

During the Senate committee of the whole’s inquiry on the vaccination program last week, Lacson also noted that implementers of the vaccine program “apparently showed preference” for the CoronaVac maker, “which may fuel speculations that corruption is involved in the government’s dealings with Sinovac.”

“Sinovac has a track record of bribery, yet why insist on dealing with them?” he said in a radio interview on Saturday.

“Considering all these, can we blame the lawmakers and even our countrymen why they express suspicion in the government’s vaccination program?” he added.

Last week, Sinovac applied with the Food and Drug Administration (FDA) for emergency use authorization of its vaccine in the Philippines, but the regulator said the company submitted incomplete papers. Lacking were the results of Phase 3 clinical trials, the FDA said.

On Saturday, China’s Foreign Minister Wang Yi announced during a meeting with President Duterte in Malacañang that China would donate 500,000 doses of CoronaVac, but Sen. Francis Pangilinan said on Sunday that the donation should not influence the FDA into hastily approving the Sinovac vaccine.

“Science and the data and results of clinical trials should be the sole basis and not political goodwill,” Pangilinan said in a post on Twitter.

Critics have slammed the government’s plan to buy 25 million doses of CoronaVac, pointing out its steep price and poor showing in clinical trials.

The latest disappointing report about CoronaVac came from Brazil last week, with researchers returning a finding that the vaccine was only 50.4 percent effective, barely enough to gain regulatory approval.

At the close of the Senate inquiry on Friday, Galvez said the government had not yet paid for the 25 million doses and had only secured an advance market commitment from Sinovac to “lock in” a certain number of doses for the Philippines.

“So it’s not a done deal?” Sen. Nancy Binay asked.

“No,” Galvez replied. —WITH A REPORT FROM KRIXIA SUBINGSUBING INQ