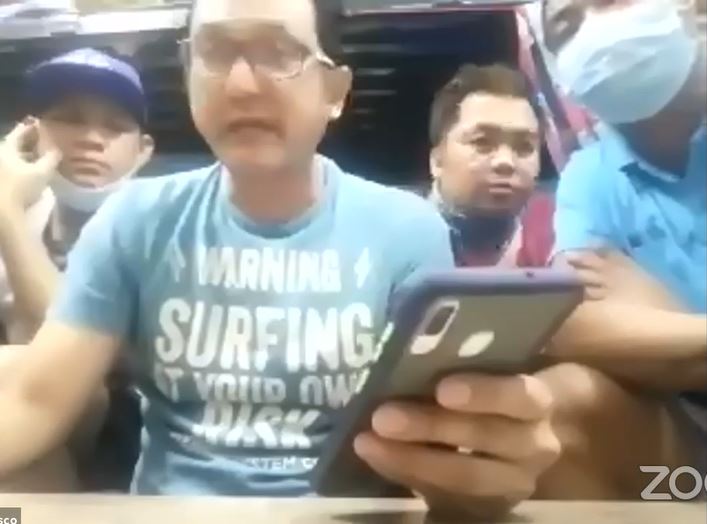 With no salary and little assistance, some OFWs in the Middle East have resorted to scavenging for food.

MANILA – Louie Perez, an aluminum installer in Saudi Arabia has not been receiving his salary regularly since last year. This February, he and his fellow workers went to the office of of Philippine Overseas Labor Office (POLO) in Riyadh to file a complaint against their company. He said they came up with an agreement that if the company has not yet given them their salary until April 15, they would be repatriated. Two months later, Perez and fellow overseas Filipino workers (OFWs) are still waiting for that to happen.

Perez also said that they also applied for Department of Labor and Employment cash assistance program for OFWs but they were told that they are not qualified because there are others who need it more.

Perez said they were abandoned by their company. With no salary and little assistance, they have resorted to scavenging for food in the mall near their dorm.

“Maybe we have waited long enough. Please let us come home,” he said, addressing to the POLO officials.

Perez’s is just one of OFWs in the Middle East who shared their situation during an online press conference organized by Migrante International June 19.

Domestic helper Marife Torres, meanwhile, shared that her employer tested positive for COVID-19. Fearing she might contract the disease, Torres went to the POLO office and relayed her situation but she merely advised to stay away from the patient.

“They also laughed at me,” Torres said.

Torres said she felt some symptoms of the virus and went to the hospital for consultation. She was given the swab test, but she did not mention however, if the result was negative or positive.

“Please help me. I don’t know what to do. I don’t want to be infected. I want to come home,” Torres said.

Torres said she already requested her agency to allow her to go home but she was told that there is still no international flight available.

Based on the government data, there are 3,926 OFWs who were infected with COVID-19 in the Middle East as of June 19. It has exceeded the number of Filipinos infected by the virus in Europe and North America, making Middle East the COVID-19 hotspot for OFWs.

Like Perez and Torres, many OFWs in the Middle East have been aching to go home.

According to POLO Riyadh, there are 23,000 displaced OFWs at present who want to be repatriated. Labor Attache Nasser Mustafa said in a report that affected workers are those whose companies have stopped operating due to COVID-19. Some are affected by the “no work, no pay” contract while others are undocumented and runaways. https://globalnation.inquirer.

For the past three months three months, Bernadette Erlano and other overseas Filipino workers staying in a camp in Al Khobar, Saudi Arabia have not been receiving their salaries. Their company stopped its operation on March 16 due to the pandemic but their salaries for March 1 to 15 were not issued.

Erlano said that many of them have been wanting to come home for fear of contracting coronavirus disease 2019 (COVID-19) there. She lamented though that the company has not been giving updates on when they can finally go home.

Erlano who works as cleaner said they sought help from the Philippine Overseas Labor Office (POLO) but no action has been taken up to now. She is among the 300 Filipino women under Jawa Human Resources Agency.

Another OFW shared the same sentiment. James Cabugsa who has been working in United Arab Emirates (UAE) for seven years, said he has not received his salary since their company stopped operations.

OFWs decried how POLO was unresponsive to their plight.

“We’re supposed to rely on government in this time of the pandemic but we could not expect anything from them,” Cabugsa said.

Cabugsa said that for the past three months, he had no salary because their company has not resumed its operations due to the pandemic. Since March 15, the company has not paid his leave. He applied for the Department of Labor and Employment cash assistance program for OFWs on April 24. But after almost two months, there is still no reply, he said.

Yolanda Lorica who works in a hospital also suffers the same fate as others in Saudi. She said that their employer is coercing them to report to work. If not, they would not have their salary and food allowance.

They sought assistance from POLO office and they were provided by food packs once.

Lorica also wants to go home but the company would not allow them. She said that some of them have no exit visas.

“We all want to be repatriated because we don’t want to risk our health. We don’t know if we have the immunity because we have been scrimping on food just to get by,” she said, adding that they are being asked to pay 15,000 Saudi Riyals (US $4,000) if they want to be granted exit visas.

Lorica said that when food packs from POLO have run out, they asked help from fellow Filipinos through a live video on social media. Fellow Filipinos immediately sent help, she said.

Cabugsa also said that the Filipino community in UAE has been proactive in helping Filipinos who lost their jobs or have no income like him.

“Here, Filipinos are active in distributing assistance to OFWs. Many groups are contributing just to help our kababayans who really have nothing. It’s inspiring,” Cabugsa said.

Joanna Concepcion, chairperson of Migrante International (ito ba position niya?), lamented that the testimonies of the OFWs are proof that they are not getting any “VIP treatment” as claimed by President Duterte’s government.

Concepcion said that they will continue to document the conditions of OFWs and will consult with lawyers on possible legal actions if abandonment of OFWs would continue in the Middle East.

She also lambasted the lack of contingency plan for OFWs who are stuck abroad.

“We demand for immediate actions such as repatriation of our kababayans and delivery of assistance for the families of OFWs who died from COVID-19. Stranded OFWs should not be made to pay for flights just to be repatriated. They should be provided with free repatriation and medical assistance,” Concepcion said.

“The OFWs needed every help they could get especially in the time of the pandemic. When the Philippine embassy or consulate are closed or cannot be contacted when needed, it is like they are abandoning our fellow countrymen,” she added.