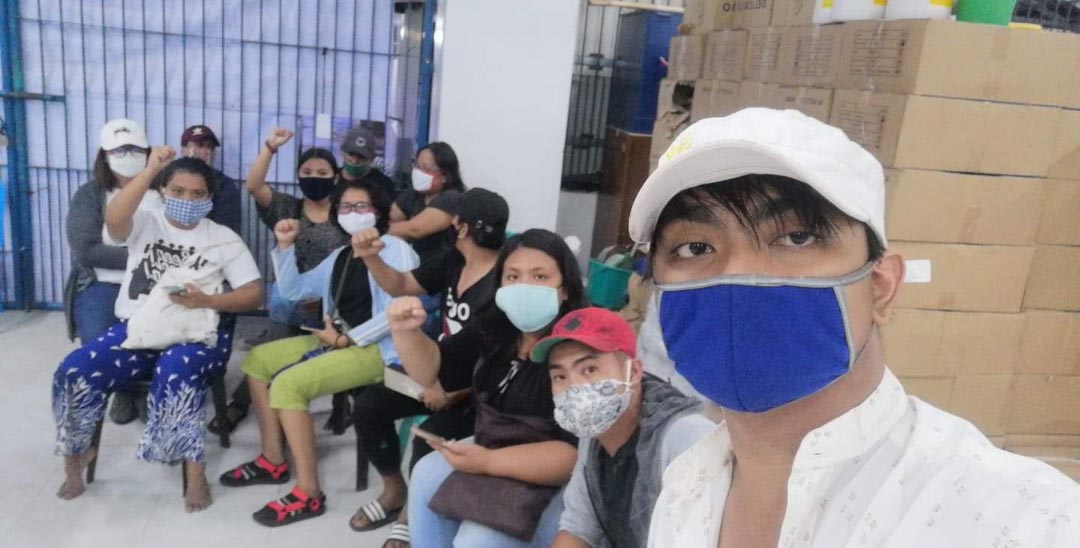 “Exactly 24 hours since Rodrigo Duterte affixed his signature on the draconian Terror Law, the first arrests were made on activists who held a peaceful protest against the dangerous law.”

SANTA ROSA, Laguna – A day after President Duterte signed the Anti-Terrorism Act of 2020 into law, 11 activists holding a protest in barangay Pulo, Cabuyao, Laguna, were arrested, July 3 by combined elements of Cabuyao police and the Army’s 2nd Infantry Division.

The eleven activists were part of a larger delegation conducting a peaceful protest to condemn the passage of the Anti-Terrorism Bill, which they said “would lead to abuse and widespread arrest of activists.”

The eleven arrested were:

Human rights alliance Defend Southern Tagalog condemned both the violent dispersal and the detention, calling it the “height of irony.”

“Exactly 24 hours since Rodrigo Duterte affixed his signature on the draconian Terror Law, the first arrests were made on activists who held a peaceful protest against the dangerous law,” said Charmaine Maranan, spokesperson for DEFEND ST. “We now see where the fascist footprints of Duterte’s police and military are headed to in case the law finally takes effect.”

Maranan pointed out the incident was the exact opposite of what National Security Adviser Hermogenes Esperson promised when he stated that the Ani-Terror Bill would not be used to impinge on the rights to peaceful assembly and expression.

“Esperon is lying through his teeth when he said that peaceful protests will be protected under this law,” said Maranan. “In light of the arrests today in Cabuyao, that claim is now exposed as a brazen lie, and we all know that state forces are hell-bent in weaponizing the Terror Law to suppress the people’s growing dissent against State abuses.”

Other progressive groups also voiced their concerns. A statement released by Kabataan Partylist Laguna called the dispersal and detention “proof that [the Duterte] regime could not be trusted on issues of protecting people’s rights.”

Bagong Alyansang Makabayan Laguna (BAYAN Laguna) meanwhile contended that the arrests had no legal basis. “There is nothing illegal with being an activist,” said Jevi Quitain, spokesperson for BAYAN Laguna.“ and there is nothing wrong with expressing one’s right to dissent. What there is, however, is police brutality and impunity; the hallmarks of the fascist Duterte regime.”

According to firsthand accounts, the program began 5 p.m. After the program, state agents approached the protesters who were packing up and began to restrain them, leading to the 11 arrests.

The arrests were described as a “violent dispersal”; Miguel Portea, a former jeepney driver and a member of STARTER PISTON, suffered bruises and cuts on his arms and legs.

According to DEFEND ST, at around 4:30 p.m., a military truck belonging to the 2nd CMO Batallion of the 2nd Infantry Division, Philippine Army was parked near the barangay hall blaring out disinformation about progressive organizations, calling them “front organizations of the Communist Party of the Philippines-New People’s Army-National Democratic Front.”

This would not be the first time the military was engaged in black propaganda, attested KPL Laguna. According to the youth organization, police and military agents have been “hard at work attacking KPL and other progressive organizations” through its “Kabataan Kontra Droga at Terorismo” initiative, a series of forums aimed at schools and communities.

According to the group, evidence showed that the content of KKDT forums had speakers “blatantly terror-tag progressive organizations.”

PAMANTIK KMU also reported that elements of the 202nd Infantry Brigade were terrorizing barangay officials in Pulo since at least June when they set up camp within the barangay hall. According to the labor group, the 202IB were looking for OLALIA national president Hermenegildo Marasigan as well as forcing barangay officials to renounce the usage of an office space adjacent to the barangay hall that was being used by Anakpawis Partylist.

As of press time, the 11 Cabuyao activists are still detained in the Cabuyao Municipal Police Station and are awaiting inquest. The police have not informed them of the charges against them.

The post 11 arrested in Cabuyao 24 hours after anti-terror bill signed into law appeared first on Bulatlat.