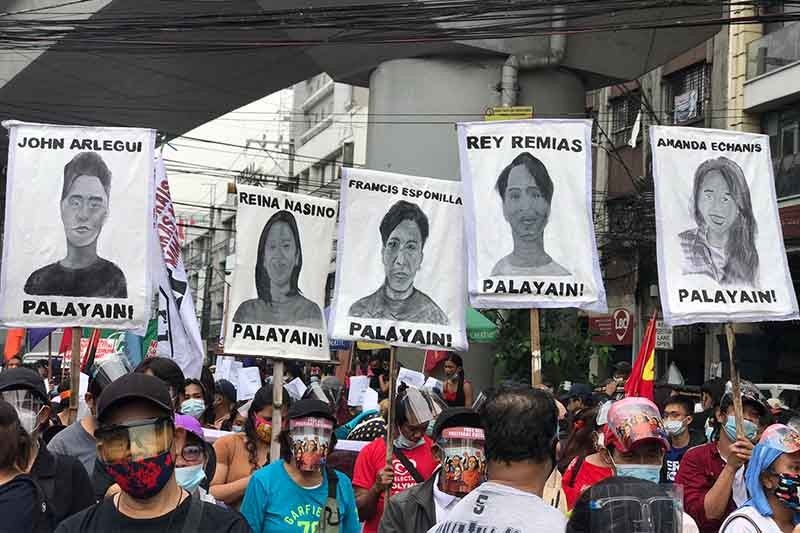 MANILA, Philippines — The arrests of six trade unionists and a journalist in a single day —  and for the same charge — have been slammed by an international rights watchdog as being highly questionable.

“The accused claim that police planted evidence to justify the charges against them. It is critical that these allegations must be thoroughly and impartially evaluated by independent investigators,” Human Rights Watch deputy Asia director Phil Robertson said.

In chorus with other rights groups and lawyers, he noted that this is not the first time the Philippine National Police has been accused of planting evidence in order to justify arrest.

Illegal possession of firearms and explosives? From ‘drug war’ to activist arrests

“Human Rights Watch has previously documented illegal planting of evidence by police in cases of ordinary Filipinos gunned down by police in the government’s ‘drug war.’ There is also a damning history of such underhanded police actions against political activists that correctly arouse suspicions,” Robertson said.

In its March 2017 report on the Duterte administration’s campaign against illegal drugs, HRW said “police routinely planted guns, spent ammunition, and drug packets next to the victims’ bodies,” to justify their claims of self-defense in official reports.

These claims from the police, the New York-based rights monitor said, run “contrary to eyewitness accounts that portray the killings as cold-blooded murders of unarmed drug suspects in custody.”

A more recent June 2020 report from the Office of the United Nations High Commissioner for Human Rights found that “police repeatedly recovered guns bearing the same serial numbers from different victims in different locations,” which suggests “planting of evidence by police officers and casts doubt on the self-defense narrative, implying that the victims were likely unarmed at the time of killing.”

The national police’s own figures acknowledge around 8,000 “drug personalities” slain in official operations where cops routinely claim that only suspects who fought back were killed, though rights groups say the number may be as high as 30,000 deaths since Duterte’s “war” began in 2016.

Meanwhile, National Union of Peoples’ Lawyers president Edre Olalia also on Friday noted that illegal possession of firearms and explosives are the usual charges filed against activists and claimed that this is because it is a case that is the easiest way to lock up activists.

As of December 3, rights alliance group Karapatan said more than 400 political prisoners arrested under the administration of President Rodrigo Duterte are accused of these same charges.

“It is outrageous and unacceptable that the Philippines government is cracking down on political activists…This really highlights the Duterte government’s contemptuous attitude toward human rights and its confrontational stance against dissenters and political activists,” Robertson said.

All seven of these individuals are accused of possession of firearms and explosives.

— with reports from Franco Luna and Kristine Joy Patag