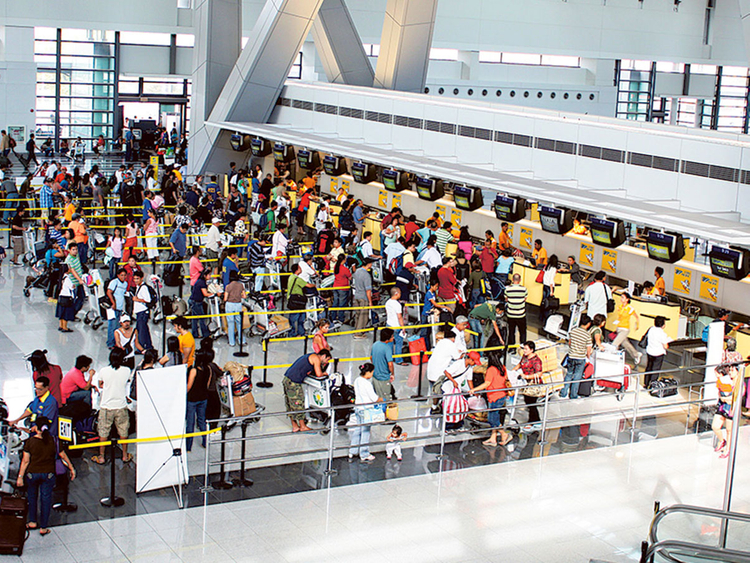 Poll: 80% of Filipinos in UAE earn less than Dh10,000, new salary rule could be a boon for ‘escort services’ at NAIA

ABU DHABI/DUBAI: A move to raise the minimum salary to Dh10,000 to enable Filipino expats to bring family members over to the UAE on a visit has kicked up a storm among overseas Filipino workers here.

The new rule imposed by Manila raises the salary threshold from Dh3,500 and took effect from August 24, 2020. Under the new rules, a UAE-based Filipino who wishes to sponsor a family member to visit the UAE must present evidence that his salary is Dh10,000 or higher.

Otherwise, no supplementary travel document, called Affidavit of Support and Guarantee (AoSG) will be issued allowing an OFW to sponsor a family member to visit the Emirates.

The AoSG has to be notarised by either the consulate or the embassy in the UAE. Some Filipinos have appealed to the Duterte government to “reconsider” the new rule.

“It’s an exaggerated increase in the salary requirement. I commend the efforts of the Philippine government during this pandemic. We are requesting that this new rule be reconsidered. It deprives our people of the right to travel,” said Rogel Importado, a Dubai-based Filipino health and safety professional.

The upward revision has made it out of reach for up to 80% of Filipino workers in the UAE, according to an online poll. The survey of Filipinos shows that 62 per cent of respondents receive a salary pot Dh6,000 or less. Another 18.6% were drawing a salary of Dh7,000 to Dh10,000.

The number of respondents — 102 — is relatively small, though it may be indicative of the general OFW population in the UAE.

According to the revised policy, a Filipino residing in the UAE can execute an affidavit to sponsor a relative — but only within the first and second degree of consanguinity or affinity.

Aside from the proof of relationship, an expat who is single must show proof of having a Dh10,000 monthly income before he or she can sponsor a relative to visit the UAE.

Married couples or a family of two (either husband and wife or single parent and child) should have a combined income of Dh14,000.

A family of four (either a husband and wife with two children or a single parent with three children) should have a total income of Dh18,000.

On September 7, Filipina Mary Joy Bartolome commented on the Gulf News Facebook page: “I’ve just been offloaded (from Manila), despite the fact that I was traveling with my sponsor… Don’t believe in travel agencies who tell you that travel is now open. It’s only alllowed for essential travel, and emergencies.”

WHAT IS AN AFFIDAVIT OF SUPPORT AND GUARANTEE (AoSG)

An AoSG, an attested letter issued to Filipino tourists as a proof that they have the support of their family during their stay in the UAE. The requirement was introduced in 2002.

The AoS is presented to Philippines immigration officials before travellers can fly to the UAE. It is, however, not required by UAE immigration authorities upon entry to the country.

The document stipulates that a Filipino sponsor is “gainfully employed or engaged in business” and holder of a valid UAE residence visa.

The Filipino sponsor should also submit a tenancy contract from the municipality under his/her name; or if tenancy contract is not under the name of the sponsor, a hotel booking duly stamped by the hotel or travel agency is needed.

E. Agustine said: “Only in the Philippines where our own gobyerno is discriminating against their own people and trample upon our right to dream for our own family. Add to the insult the PhilHealth, which charge (overseas workers) an annual fee, even if we already have health insurance cover here in the UAE. It’s like they’re saying ‘Don’t go home anymore’.”

J. Pascual Austria added: “Wow, they only thought of that now, when jobs are tough in the Philippines and a lot of people are jobless.”

Another Filipino added: “This is silly. Some immigration staff should be punished for gouging people who simply want to go on a tour or visit. They deliberately block you from boarding your flight so you end up spending more grease money. They’ve been doing this at the immigration in the past. They should look into this.”

Felicidad F said: “Expect a spike in ‘escort services’ among Manila immigration staff (at the Ninoy Aquino International Airport, NAIA), because of this new rule.”

C. Morabe commented on social media: “This happened to me before. Before I flew to the UAE, they asked too many questions. Like the maiden name of my grandmother, which I knew, and the family name of the mother of my grandfather, which I didn’t know. Then finally, he asked for money. But I only showed him 500 pesos in my wallet. Too many crooks there. I didn’t tel him that I tucked my money into my socks. Finally, they allowed me to board the plane. My papers were complete.”

Tomas Elkrist said: “So sad. This new rule would hit many. Only a few Filipinos actually earn 10k or more in the UAE. They (Manila authorities) should go after the escort services, who enable some to get past immigration checks even if they have no real family members in the UAE.”

Gene Paul Jacinto: “Should the government burden Filipinos all the time, including OFWs?”

Not everyone disagrees with the Manila government’s move.

Edgar Calma, a Filipino medical worker in the UAE, said. “We have to take full responsibility, and be ready if things don’t turn out according to plan. I agree with this move at this time. It’s to protect our own people. The world economy is down right now.

“In many cases, Filipinos who come here on visit actually end up in the job market. Since jobs are few and far between, many end up having to fend for themselves and then asking to be repatriated. It’s a preventive measure.”