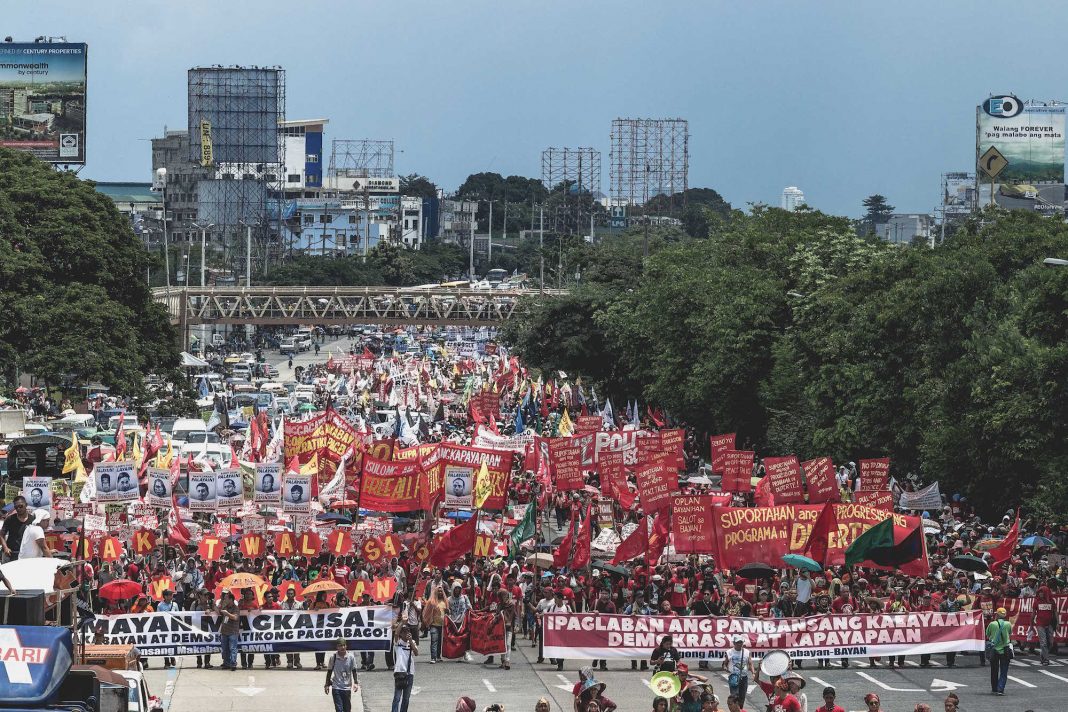 On July 23, Pres. Duterte will deliver his third State of the Nation Address. Simultaneous to this is the United People’s SONA, a gathering of tens of thousands from Metro Manila and other regions from across the country.

While the president and our honorables are cozied up inside the halls of Congress, the people will be on the streets, armed with stories about the real state of the nation.

What else can we expect at the United People’s SONA?


Just about everyone who is fed up with the government’s various anti-people policies. A coalition of farmers, workers, lawyers, organizations with various political affiliations, religious groups, and personalities will join this year’s massive mobilization. This historic unity will slam the second year of President Rodrigo Duterte’s presidency amid what progressive groups say his ‘de facto martial law’ and Charter change.

The program will start at 12 PM at the UP Diliman University Avenue. At 2 PM, protesters will march to Commonwealth Avenue where the main program will be held.

STRAIGHT FROM THE HEART

Duterte will not be Duterte without his rambling remarks that range from blasphemous to misogynistic to dangerous (as the police and military take these as marching orders), but never funny. Take for example his pronouncement to bomb Lumad schools in Mindanao or what he believed to be a joke about shooting female New People’s Army guerrillas in the vagina.

He has also been known to make promises such as ending labor contractualization or curbing drug abuse. How we currently fare in these departments can be evaluated by the numbers — 23,000 dead in the drug war and thousands more still on a contractual basis.

Shortly after his speech last year, Duterte showed up in front of thousands of protesters. This year, he is advised to skip personally meeting the protesters who will gather outside Batasan.

Duterte is pegged to deliver his speech by 4 PM at the Plenary Hall of the Batasang Pambansa complex. By the time Duterte would deliver his speech, the United People’s SONA will have already started. Speakers from different sectors will talk about various issues, from the persisting clamor to improve the public transport system; the cumbersome effect of TRAIN law on basic goods; lack of accessible housing; contractualization and the need for wage increase; privatization and commercialization of the education system; extrajudicial killings (thrice the recorded EJK under the regime of the Dictator and former President Ferdinand Marcos); the thousands of human rights violations still under investigation; and martial law in Mindanao.

There will be no need for cinematic direction from big-time directors because the manifestations of the current socio-economic struggles faced by the Filipino people are more than enough to see the government’s disinterest to deliver its mandate.

Duterte is presumed to deliver his SONA no longer than 35 minutes. The Palace announced the exclusion of department achievements in the speech which will be discussed at the Pre-SONA briefings. According to Presidential Spokesperson Harry Roque, this will also give the President the chance to be able to speak ‘straight from the heart’.

Netizens have taken to Twitter to express their thoughts on his ‘straight-from-the-heart’ speech.

Duterte’s SONA 2018 will be ‘straight from the heart’ https://t.co/8nbncSbqL8

Harry Roque on Pres Duterte not reading his prepared speech for the SONA: “He wants it to come straight from the heart… not hindered by the need to report his achievements.”

But isn’t that the purpose of the State of the Nation Address?!

The People’s SONA is a wide avenue for progressive artists to depict the people’s plight and struggles through their writings, drawings, paintings, and songs.

On Duterte’s First SONA, a six-panel mural titled “Portrait of Peace” was paraded on the streets by Ugatlahi Artist Collective. It depicted the 15-point Agenda for Change by Bagong Alyansang Makabayan representing proposed pro-people measures.

Last year, a four-meter high effigy was unveiled at the People’s SONA protest. The group paraded an effigy of a blood-spattered hybrid military tank with a depiction of Duterte, Uncle Sam, Defense Secretary Delfin Lorenzana, and Armed Forces of the Philippines Chief of Staff General Eduardo Año. The effigy represented the political and economic repression under Duterte’s administration, the domination and control of the US government over Philippine affairs, and the Martial Law declaration in Mindanao. Ugatlahi Artist Collective once again designed and created this work of art.

This year, another work of art will be showcased  by Ugatlahi to represent the current political situation. You’ll have to see for yourself what Ugatlahi will come up with this year. And of course, the effigy experience won’t be complete if you don’t watch it burn!

Workers, farmers, and national minorities coming in from different region are expected to join this year’s protest. Lumad students will also be there to share their experience living under military rule. Swapping stories with them is a good start at knowing the real state of the nation. Of course, being one with the struggle is the best support we can offer.

What are you waiting for? G ka na ba manindigan? Bring an umbrella for the rainy day, bring your friends, post photos with the official hashtags, and be part of history. Join the United People’s SONA.