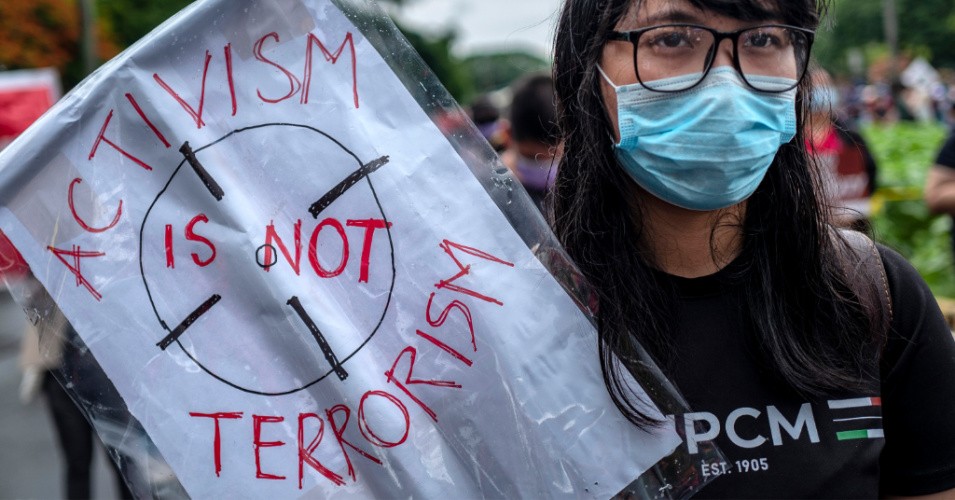 WASHINGTON, DC – OVER SEVENTY ACTIVISTS and solidarity allies staged a protest action
and program in front of the Philippine Embassy on Saturday to denounce the March 7th
crackdown on trade unionists and grassroots organizers in the Southern Tagalog Region, outside of Metro Manila, in the Philippines, which left at least nine dead and six arrests in one day alone.

Janeva went on to add more details on what became known as “Bloody Sunday:: “In the early
hours of Sunday morning, police have carried out synchronized and simultaneous operations
serving blank search warrants after the fact that they have trespassed the households of community organizers to plant weapons. When we say weaponizing the law, the police and the
judges who serve these warrants know that accusing them of illegal possession of firearms
would be non-bailable. To make matters worse, the police have not returned the bodies of the
four slain activists in Rizal to their families, and eventually detained the relatives and the
paralegals in the funeral home overnight. This is unacceptable, hindi na ho ito makatao (this is
no longer humane).”

For Kabataan Alliance’s Carmela, the call to “Defend Southern Tagalog” was personal: “I was
born and raised in Mindoro, which is part of Southern Tagalog. Just across from my island is
Batangas, where the couple, Chai Lemita Evangelista and Ariel Evangelista, were killed on
March 7, on Bloody Sunday. They were fisherfolk who worked as staffers with the Ugnayan ng
Mamamayan Laban sa Pagwawasak ng Kalikasan at Kalupaan (Coalition of Citizens Against
the Destruction of Nature and the Land or UMALPAS KA [Tagalog for Resist]) in Nasugbu,
Batangas. It’s terrifying because it’s so close to home.”

Delia from Gabriela DC added that the Evangelista “couple was killed [by the police] while they
were sleeping in their home in the morning hours. They were survived by their 10-year-old child.”

Bennard, a member of BAYAN’s Migrante DC, implored: “Anong klaseng sistema ang
gumagamit ng dahas upang patahimikin ang mga boses na wala namang isinisigaw
kung ‘di para ipaglaban ang mga karapatan ng mga Pilipino? Sinong mga berdugong duwag na ito na pinasok ang mga bahay ng ating mga kasama upang sila ay dakpin o patayin habang sila ay natutulog? (…) hindi lang kalungkutan ang nagdala sa atin dito sa harap ng embahada. Tayo rin ay dinala ng ating galit hindi lang sa rehimeng Duterte kundi pati na rin sa sistema na nagsilang sa mga taong katulad niya. “(What kind of system uses violence to silence the voices that raises nothing but the calls to fight for the rights of Filipinos? Who are these cowardly executioners that raided the homes of our comrades to arrest or kill them while they were asleep? It is not only grief that brings us here in front of the Embassy, but we are also here in our rage against the Duterte Regime and the system which has created it.)
Jo of Gabriela DC, spoke up about the red-baiting of activists and extra-judicial killings, “The
national officers of Gabriela Philippines, women union leaders, prominent journalists, and others have been targeted by the [Philippine] National Task Force to End Local Communist Armed Conflict (NTF-ELCAC). Among them more than 290 extra-judicial killings of farmers–36 who had been peasant women–and also currently 98 women political prisoners are still behind
bars.These attacks are all part of Duterte’s counterinsurgency program, meant to crush all
dissent and particularly the national democratic movement. However, these killings only show
that the dissent is justified, and now more than ever, it’s very necessary.”

Malaya Movement’s Josef declared: “We do not live in normal times. In the Philippines, there is
a war criminal, sitting as president who is unleashing his attack dogs, telling them to ‘Kill! Kill!
Kill!’–to disregard human rights. And it is not just Duterte that is wrong, it is all those that are enabling him. It is like the [Philippine] ambassador, [Jose Manuel Romualdez], that sits
there in that Embassy – needs to be held accountable!” “Best way to honor those that have died is to take up those issues that they have fought for all their lives–workers issues, women’s issues,..climate issues. This is what they were advocating for in the night they were dehumanized, tortured, and killed, and if we want to honor them, I am begging you to join an organization if you’re not part of ne. Join a solidarity organization — for the Philippines,” added Josef.

Solidarity allies and non-Filipinos were in no shortage alike at this rally. Stressing the role of
US-backed dictatorships, Andre Powell of People’s Power Assembly Baltimore, added “We
all know very well where the money comes from that backs this dictator…Our [US] government
passes the laws and approves the financial measures to give to other countries that murder,
arrest and harrass poor working people, and their organizations fighting to make life better.”Jhong Delacruz, coordinator for BAYAN in the DMV, acknowledged the presence of the BAYAN member-organizations present, Anakbayan DC, GABRIELA DC and Migrante DC, and invited everyone to join these organizations in this call to action: “BAYAN was founded back in 1983, at the height of the fascist Marcos dictatorship, not quite unlike the one we’re under today…Bullets and bombs are what they will use against us, but our principles and unity is our strongest defense…By building our organizations, by building BAYAN, this is the concrete justice that will avenge the lives of the kasamas. This will bring about the fundamental change they gave their lives for.”

In the light of this intensified campaign by ‘state-sponsored forces’ and the spate of human
rights violations, BAYAN member-organizations and solidarity organizations unanimously
renewed the call to endorse the Philippine Human Rights Act, which effectively suspends US
military aid to the Philippines until such time that human rights violations by Philippine security
forces cease and the responsible state forces are held accountable. # (Press Release from Bayan-USA).