Angel Locsin Gets Candid About Her Advocacies—Education, Female Empowerment, Indigenous Rights, And More 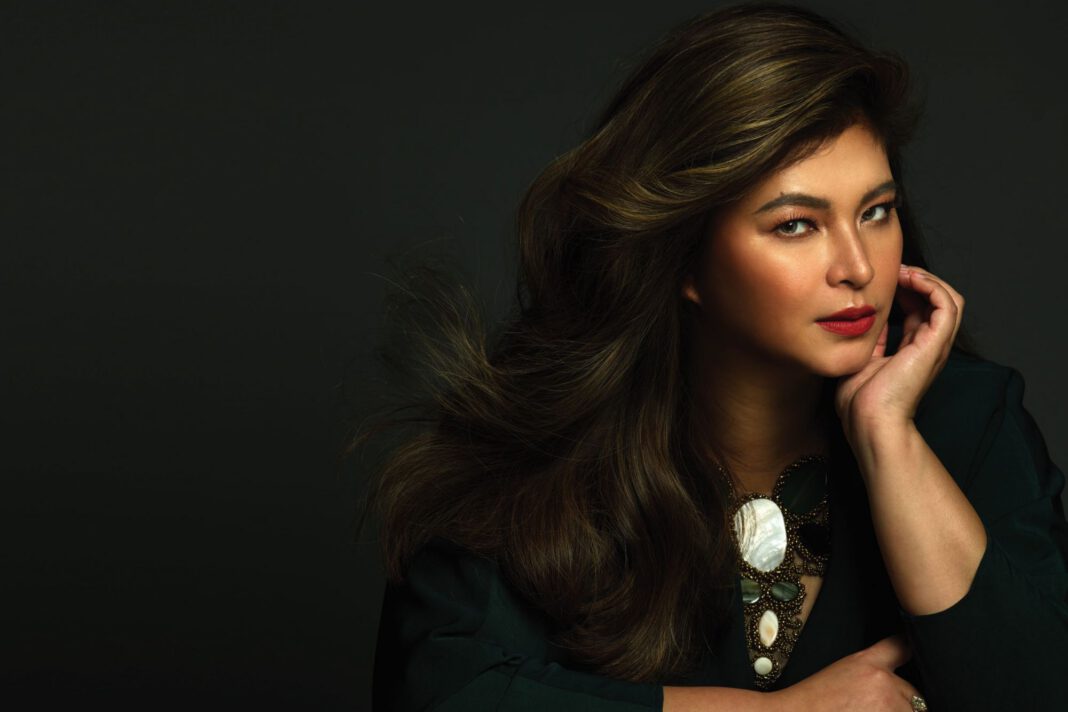 Having played many strong and dynamic characters on television and film, Angel Locsin looks to the future and shares her passion for helping others through her own philanthropies

“You can’t put yourself in a box because you’re afraid of other people’s opinions,” the actress Angel Locsin said firmly over a Zoom call. “You have to live for yourself. [If you don’t], you’re not being truthful to others or worse, you’re being dishonest with yourself.” In the industry for almost two decades, Angelica Colmenares (more popularly known as Angel Locsin) is no doubt a veteran in Philippine show business.

Having played various iconic characters on local primetime television, Locsin has become a household name over the years. Laidback and confident, she spoke passionately about causes dear to her heart and how she’s adapted to being in the spotlight. “When you’ve been in the industry for a long time—not to brag—or when you’ve received several acting awards, you become hungry for achievements outside your craft. If you’ve previously been noticed for your looks, outfits or how sexy you are, you eventually want to be known for something more than your physical attributes,” Locsin shared. “I want to be remembered for how I’ve been able to make other people feel that ‘I’m here’, ‘I care’. That for me would be the bigger achievement.”

It was a gloomy Saturday as many Filipinos braced themselves for another storm to come. For a country that encounters an average of 20 typhoons a year, not many anticipated just how devastating Typhoon Ondoy (International Name: Ketsana) would be. According to the United Nations Office for the Coordination of Humanitarian Affairs (Unocha), it brought a month’s worth of rain in just 12 hours when it swept across Metro Manila and parts of Central Luzon on September 26, 2009. At least 140 people perished, and half a million people were displaced from their ruined homes.

“When all this was happening—seeing people on the news being evacuated, dying, their houses flooded—these were people whose faces we knew. Our friends, co-workers, relatives, even many of us were victims ourselves,” Locsin remembered the devastating weekend. “Of course, as an actress, I have plenty of shoes, clothes, bags that I don’t necessarily need. [During that time], I had a moment to realise how excessive [all] that was. So, together with Anne [Curtis], we began a Shop and Share project. We wanted to help the victims through fund-raising for rehabilitation, relief, or anything else needed at the time. That’s where it really started for me.”

Locsin became increasingly more active with social causes since then. Although she always donated or lent a helping hand whenever possible, it was this event that pushed her to be more involved. When the pandemic finally came into public consciousness early this 2020, Locsin was instrumental in raising millions of pesos for the #UniTENTweStandPH campaign, a social media call that successfully raised funds for 135 hospitals by providing 246 isolation tents and 21 sanitation tents, including various other necessities like air conditioning units and PPE supplies. All this was done during a time when most were scrambling to address the quick uptick in Covid-19 cases in the Philippines. She even brought back the Shop and Share project in May of this year.

When asked about what she’s learnt in the past months, she said, “Simple things like drive-thrus, delivery [services], mani-pedis, hair salons…things like that, we’ve taken all for granted. If there was any good thing to be gleaned from this pandemic, it’s that families have gotten closer. We’ve gotten to know each other more, really talk and bond. But I’ve also learnt that we have to develop more skills so that we become less dependent on other people.” Although the year is coming to an end, Locsin pointed out that the fight is far from over.

“There really is such a thing as ‘donor’s fatigue’; it’s understandable. We just have to remind ourselves that it’s on us to support each other and that help doesn’t equate to cash or goods only. Simple words of support go a long way, especially for our front liners. Wag natin kakalimutan makipag-kapwa [let’s not forget to be one with others]. Although we’re all in survival mode, it [still] makes a big difference to think outside oneself.”

Besides being an advocate for frontliners, Locsin has also been very vocal about education, which has completely migrated to the online space nowadays. “I’ve been hearing stories of students giving up or committing suicide, it’s very sad. I think it’s important to let young people know that if they feel they aren’t able to give their best right now, that’s okay. If possible, seek help from friends, classmates or even your teachers—try not to let the pressure get to you,” she gave a few words of encouragement. As a public icon, Locsin isn’t a stranger to external pressures or stress. She mentioned that to unwind, she takes a step back to assess who she truly is. A tip, perhaps, that’s also applicable to those facing the stresses of virtual work.

2020 has been a year of epiphanies and monumental changes. Everyone’s tried something new or have taken up a hobby to cope with quarantines and lockdown. For Locsin, this brought an opportunity to explore her longtime dream to be a farmer. “Even before plantito/ plantita[ s] were a thing, I’ve always wanted to put up a farm; I just wasn’t able to focus on it because I was always so busy. I’ve had a piece of land that’s been waiting to be developed. Now, I’m [finally] beginning that project. I want to help the environment, the community and those who need jobs or more food supplies,” she shared.

Locsin has faced criticism online for being vocal about the causes she espouses. But she is adamant to use her platform to speak her truth. “At some point, of course, [being an actress] was about making a livelihood, but now, I understand why I’m lucky enough to be in this position,” she explained. “When people approach you and ask for help to spread awareness about education, the rights of indigenous people—or any cause really—if you care for others, it’s second nature to speak up.”

In 2009, Locsin visited Lianga, Surigao Del Sur where she talked to the Lumad community and found an understanding of their way of life. She has since been vocal about the rights of indigenous Filipino people who often face many socio-political challenges. “First of all, when you say ‘fighting [for rights]’, people often assume you’re on the offensive right away. But that’s not always the case. Listening is part of it too—to let them feel like you hear them, and you are one with them,” she clarified. She recalled a moment that struck a chord with her during one of her visits to the community. “There was an elder who was crying because it was a deep honour for their clan to finally have one of them graduate from elementary school. Education is that important to them. They want to learn how to read and to understand their rights. I think that’s what we [all] aim for when we go to school, [to be more competent in the world],” she related.

Perhaps one of Locsin’s most iconic and memorable acting roles was her portrayal of Mars Ravelo’s superhero, Darna. First appearing in Filipino comics in 1950, the character is dear to audiences nationwide. So, when Locsin took on the role, her fans were ecstatic. Nowadays, due to her charity work, many have dubbed her the ‘real- life Darna’. “[That character] symbolises empowered women. Literature is a big help, yes, but there is more we can do,” Locsin said. “There is a wrong connotation that if you call yourself a feminist, you’re somewhat of an amazon, that you’re too tough. But it’s true that being a woman encompasses many things. You can be sensitive, graceful, but also know and stand for your right to contribute to society on your own terms.”

Locsin has long been an advocate for women empowerment, joining various community counselling groups and lending her voice to organisations that seek to end violence against women and children. According to the Global Gender Gap Index reports released by the World Economic Forum, the Philippines ranked 10th, 8th and 16th in the world in 2017, 2018 and 2020 respectively on this issue. Despite these relatively high ratings, Locsin noted that there remain many injustices and more can be done with regards to gender equality in the Philippines. “Even in show business, our salaries are lower. Why? We put in the same [if not more] effort into our work. All we’re fighting for is equal opportunity,” she stated. “I don’t think many realise women do all these things while wearing four-inch heels, too!”

There have been many inspiring women the worldover but Locsin was eager to point out just how much she admired the late Gina Lopez and Mother Teresa alike, both of whom inspired her to lead a life in service of others. “To me, [those] who encourage other people, who use their voice for the voiceless and promote volunteerism… these are those I find the most influential,” she noted.

From playing superhero characters on screen to being close to one in real life, it’s difficult not to admire Locsin for her drive to make the most of her platform. It’s not always easy to shift gears especially when you’ve lived majority of your life in the spotlight, but she does so without effort. Easy-going yet principled, Locsin is definitely more than meets the eye. For this award-winning actress, her life’s purpose goes beyond the screen. “We are all entitled to our opinions,” she said. “But you’re also entitled to choose whom you listen to.” As the limelight follows her, Locsin proves that her greatest role yet is one that is unfolding today—a woman with a deep passion for a better and kinder world.

Get a digital copy of Tatler’s December 2020 issue for free on Magzter.