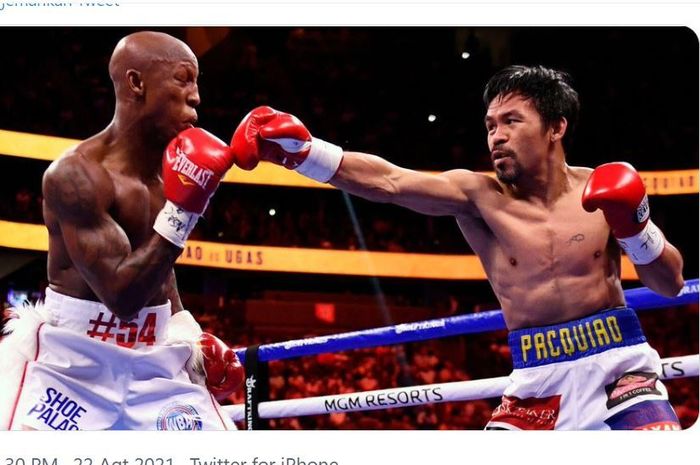 ‘It’s now the right time for him to retire, focus on his Senate job, and intensify his anti-corruption campaign’

It’s time for Manny Pacquiao to hang up the gloves, but prepare for his next fight – as an anti-corruption crusader, that is, sportsmen and boxing pundits in Cagayan de Oro said.

For them, it was just too difficult for a 42-year-old boxer to beat Father Time, and a much younger and stronger opponent like Cuban champion Yordenis Ugas.

Lacking sting in his punches, Pacquiao bowed out to Ugas on Sunday, August 22, via a unanimous decision loss in what could be the last bout of his illustrious ring career that has spanned nearly three decades.

It took a replacement fighter in WBA super welterweight champion Ugas to remind the world’s only eight-division champion that everything has an end in the physically-exacting sport, where changing of the guards is inevitable in favor of the young.

“It’s now the right time for him to retire, focus on his Senate job, and intensify his anti-corruption campaign which he started before he left for the US,” said Eulogio Suaner, athletic manager of the Northern Mindanao team in the Palarong Pambansa.

Leonides “Jack” Biantan, a local sports columnist, said Pacquiao should move on from his ring defeat, and focus instead on his unfinished business of exposing corruption in government.

Biantan said Pacquiao should immediately return and help in the Senate by looking into the findings of state auditors on how the health department handled some P67 billion in pandemic response funds in 2020.

“Pildi gyud, wala tay mahimo. Balos na lang, uli Pilipinas kulatahon ang mga corrupt ug kunsintidor (There’s nothing that can be done about his loss. But he can return, rechannel his energy, and get even by going after the corrupt and those who tolerate such),” he said.

But Biantan noted that the Filipino boxing icon was still his usual self – brave and in fighting form up to the last round.

It’s just that, the power that earned him a credible 62-8-2 win-loss-draw slate with 39 knockouts, was no longer there, said 73-year-old former boxing judge Proculo Maslog.

“Against Ugas, it’s obvious that Pacquiao was no longer his old brilliant self,” Maslog observed.

Still, Pacquiao managed to withstand the punches of Ugas, including the left and right straights to the head that often shook the older fighter in their grueling 12-round duke out, said Biantan.

The 35-year-old Ugas, who is four inches taller than Pacquiao, improved his ring record to 27-4 with 12 stoppages, a feat made possible by him being called as last-minute replacement of WBC and IBF belts holder Errol Spence Jr., who suffered an eye injury.

Former Cagayan de Oro congressman Benjamin Jose Benaldo said Pacquiao already gave the country so much boxing glory but it looked to him that the recent fight “was purely for money.”

“Apart from boxing, he’s a public servant and it’s obvious that he needs funds for his 2022 aspirations. But he did this thing past his prime,” Benaldo said.

Lawyer and erstwhile professional boxing promoter Antonio Almirante called Pacquiao the “best voice of the masses” in the Senate now.

Almirante said Pacquiao’s political future depends on the voters, and the effect of his defeat to Ugas can go either way.

“Dili kakumpyansaan, basin malooy ang tao sa iya (He is still a force to reckon with, and people might sympathize with him),” Almirante said.

Henry Lopez, Davao’s multi-titled Paralympics chess hero in the SEA Games, said Pacquiao would be better off quitting to avoid a serious injury in the ring.

“Ugas should be his last dance, and he might as well concentrate on his plans in politics where he  stands a good chance of winning,” added sports organizer Van Halen Parmis.

Calingin said Cariaga felt sorry for Pacquiao – and she also lost a P200 bet on her boxing hero. – Rappler.com