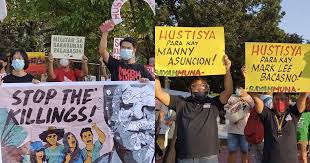 Nine activists were killed, most of them in their own homes, and at least four others were arrested in police and military raids early on Sunday.

Six were killed in Rizal province, two in Batangas, and one in Cavite, said the police in the Calabarzon region.

The simultaneous raids were carried out by the Philippine National Police together with the Armed Forces of the Philippines to serve search warrants for loose firearms and illegal possession of explosives, according to Lt. Col. Chitadel Gaoiran, spokesperson for the Calabarzon police.

“We will not be silenced, and we call on all Filipinos to condemn these raids and to stand with us in the struggle for justice and in defending people’s rights,” Cristina Palabay, Karapatan national secretary general, said as her group urged the Commission on Human Rights (CHR) to investigate the raids and “ensure that justice and accountability is served for the victims of state terror and fascism.”

The police have not immediately released the names of the fatalities, but human rights advocacy group Karapatan identified five of them as Emmanuel “Manny” Asuncion, a Bagong Alyansang Makabayan (Bayan) coordinator in Cavite who was killed in a police raid in his home in that province; Mark Lee Bacasno and Melvin Dasigao, both members of the urban poor group San Isidro Kasiglahan, Kapatiran at Damayan para sa Kabuhayan, Katarungan at Kapayapaan (SIKKAD K-3), who were killed in Rodriguez, Rizal; and Ariel Evangelista and his wife, Chai Lemita Evangelista, activists who advocated fishermen’s rights, who were killed in their home in Nasugbu, Batangas.

According to Karapatan, the Evangelistas’ 10-year-old son survived the raid by hiding under a bed.

The group also claimed that the police who raided the Evangelista home took away the bodies of the couple, which Chai Evangelista’s mother, Inday Lemita, later found at the John Paul funeral home in Nasugbu.

As for Asuncion, Kobi Tolentino of Anakbayan-Southern Tagalog said the Bayan coordinator was with his wife, Lizelle, and another associate in the couple’s home at Salitran village, Dasmariñas City, when about 30 policemen barged in and ordered Asuncion’s wife and associate to step out.

“Then they heard about 10 shots,” Tolentino said. “After that, they saw [Asuncion’s] body being dragged down the stairs. There was not even a stretcher.”

Fishermen’s group Pamalakaya said Asuncion was one of the staunchest champions of fishermen, joining them in denouncing projects that affected Cavite’s coastal areas.

Asked who were the targets of the police-military operations, Brig. Gen. Felipe Natividad, the Calabarzon police director, said on Sunday he would still have to check with the other “operating units.”

A member of Karapatan, Nimfa Lanzanas, was also arrested in Calamba City.

Arrested in Rizal was Eugene Eugenio of the Confederation for Unity, Recognition and Advancement of Government Employees (Courage).

According to Gaoiran, there were nine others who eluded policemen serving the warrants for illegal possession of firearms and explosives.

Describing the raids as “bloody Sunday,” Palabay compared the police-military operations to last year’s mass arrest of activists in Negros Oriental where 14 peasants were also killed.

Palabay also cited the arrest on Thursday of Arnedo Lagunias, an activist affiliated with the Lakas Manggagawang Nagkakaisa sa Honda and the Alyansa ng Manggagawa sa Enklabo, and Ramir Corcolon, secretary general of Water System Employees Response and a national council member of the Confederation for the Recognition and Advancement of Government Employees. Lagunias was arrested in Santa Rosa, and Corcolon, in San Pablo City, Laguna.

In a statement, Bayan pointed out that the attacks followed on the heels of President Duterte’s order on Friday to the police and the military to “kill them (communist rebels)” during the launching in Cagayan de Oro of community projects led by the National Task Force to End Local Communist Armed Conflict.

“These [state] forces do not distinguish between armed rebels or activists, they just kill then say ‘they fought back’ then plant firearms and explosives [on the scene],” he said.

Phil Robertson, Human Rights Watch deputy director for Asia, asserted the same point, saying: “The fundamental problem is this campaign no longer makes any distinction between armed rebels and noncombatant activists, labor leaders, and rights defenders. It is not a coincidence that these deadly raids happened two days after President Rodrigo Duterte ordered police and military to ‘kill all’ communists and ‘don’t mind human rights.’”

—WITH REPORTS FROM NESTOR CORRALES AND JEANNETTE I. ANDRADE INQ