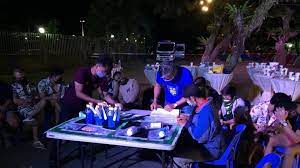 Nothing drives home the dismal reality of the Duterte administration’s failed “war on drugs”—if that point still needs reiterating at this time, over five cautionary years later—than the raid last Saturday by agents of the Philippine Drug Enforcement Agency (PDEA) on a beach party in Davao de Oro, which yielded some P1.5 million worth of party drugs and other narcotics.

The drug-fueled blowout happened right in the home province and bailiwick of President Duterte. And that party, which led to the arrest of 17 individuals, had a local VIP in attendance: Davao City information officer Jefry Tupas, said to be one of the closest aides of Davao City Mayor Sara Duterte, the President’s daughter. Once news of the drug bust broke out, Tupas (who goes by the female pronoun) was immediately fired from her job. Sara Duterte’s terse statement on the incident—released on Nov. 9, or three days after the Nov. 6 raid—had nothing to say about the suspected involvement of her aide in the explosive issue of drugs, and neither was the mayor apparently inclined to know: “The details of the raid are known only to the PDEA officers in Davao de Oro and Ms. Tupas,” the statement said.

Tupas admitted to have been at the party with her boyfriend, but her official excuse was that she left the event an hour before the raid. Several of those arrested, however, told reporters a different story: Tupas was in fact among those caught and rounded up, and when the PDEA agents started identifying their targets, Tupas immediately disclosed that she was “a staff of Inday Sara.” Later, the same detainees recalled, Tupas and several others were released.

What could have emboldened the partygoers to flout the law under the noses of authorities in the Dutertes’ own backyard? Could the presence of Tupas among them explain the brazen attitude? And did Tupas in turn assume that she and her cohorts would get away with such activities given her ties to the powers that be? On the other hand, with all its clout, control, connections, and resources, how was it possible for the administration of Mayor Sara not to have any inkling about the suspect company kept by one of its most powerful officials?

Initially mum about the incident, the PDEA has now announced an investigation into the incident and Tupas’ involvement. Whatever the outcome of the probe, the incident is another blow to what little credibility is left of the administration’s vaunted drug war.

The drug problem is “swallowing” the country, Mr. Duterte himself admitted at a campaign rally in 2019. “You can read it every day … There are billions worth of drugs. Before, it was only thousands. Drugs, I cannot control, son of a b***h, even if I ordered the deaths of these idiots,” he said, referring to the thousands of drug suspects killed in police raids.

In June last year, the President described the police haul of 756 kilos of methamphetamine from another drug operation as proof that the Philippines has become a transshipment point for narcotics.

Then again, the program’s failure may be partly self-inflicted: The President, who has styled himself as the unforgiving nemesis of anything related to drugs, is conveniently forgiving when it comes to the drug-related scandals of allies and friends.

There’s former Customs commissioner Nicanor Faeldon, who escaped prosecution in the sensational P6.4 billion “shabu” shipment case in 2017. In the end, only the warehouse caretaker was charged, arrested, and detained for two years until the case was dismissed. Faeldon, meanwhile, was made the deputy administrator of the Office of Civil Defense.

Then there’s Mr. Duterte’s former Davao police chief Isidro Lapeña, who was relieved as Customs commissioner for the smuggling of an even bigger drug haul—P11 billion worth of shabu hidden in four magnetic lifters in a Cavite warehouse in 2018. Excusing his incompetence as more of naivete (“nalusutan”), the President promoted Lapeña to a Cabinet post as Secretary of the Technical Education and Skills Development Authority.

The administration’s glaringly uneven and differing standards in its antidrug campaign have only ended up undermining the program. The 2018 report of Eduardo Acierto, for instance, was ignored by the police and Malacañang despite its grave content: The former deputy director of the Philippine National Police’s Drug Enforcement Group revealed the possible links to illegal drugs of “presidential economic adviser” Michael Yang.

Acierto has since resurfaced and expressed willingness to testify against Yang, who has been implicated as the financier in the Pharmally controversy. Will the allegation get proper attention this time? Not likely, and for a depressingly familiar reason: Mr. Duterte is staunchly standing by his friend Yang, defending him to high heaven while excoriating the senators digging into the Pharmally mess.