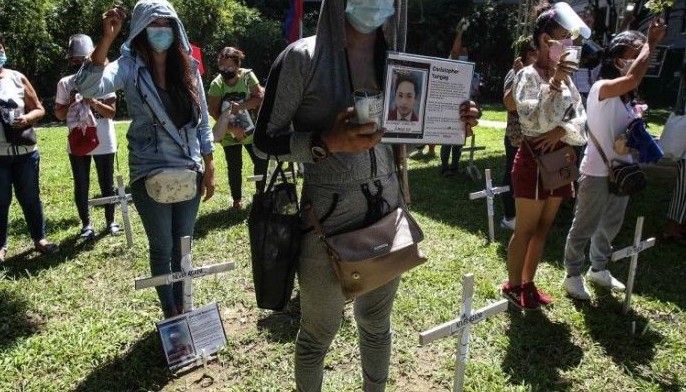 MANILA, Philippines — Families of victims of the “War on Drugs” waged by the administration of former President Rodrigo Duterte still remain hopeful even as President Ferdinand Marcos Jr. stated that the country “has no intention” of rejoining the International Criminal Court, which is pushing for an investigation into the bloody anti-illegal drugs campaign.

“Drug war” victims’ kin were “quite prepared” for Marcos to adopt his predecessor’s stance toward the international court that tries crimes against humanity, but still see “some glimmer of hope” in the president’s previous statements, said lawyer Kristina Conti, who represents “drug war” victims’ families through the group Rise Up for Life and for Rights.

“Marcos claims to want justice for all,” Conti said Tuesday on CNN Philippines’ “The Source.” “And in seeing this and in moving forward in this campaign on the war on drugs, we were thinking that he would not, or no longer continue the bloody campaign as embodied by tokhang.”

Conti is cautious, however, that Marcos’ position on not letting the Philippines’ rejoin the ICC may also mean that his administration would not cooperate with the tribunal’s potential investigation.

As far as Solicitor General Menardo Guevarra is concerned, Marcos considered “the best interests of our country, with utmost regard for our national sovereignty” in deciding not to return to the fold of the ICC.

Oplan “Tokhang” — a portmanteau of Visayan words “toktok,” which means to knock, and “hangyo,” which means to plead — was the name given to the flagship anti-drug campaign of the Duterte administration chiefly orchestrated by former top cop turned Sen. Ronald dela Rosa.

Duterte and Dela Rosa are among the officials of the previous administration implicated before the ICC for crimes against humanity by kin of “drug war” victims, who see no other recourse but to seek redress from the international tribunal.

“There is no investigation, genuine and credible enough to mirror what the ICC is doing,” Conti said.

But lawyer Harry Roque, former presidential spokesperson who now serves as private counsel to Duterte, claimed Tuesday on ANC’s “Headstart” that the ICC should only step in if a country is unwilling or unable to prosecute crimes against humanity, which he said the Philippines is fully capable of doing.

“Our courts, our legal institutions, are neither unwilling or unable and complainants should file their cases before Philippine institutions and not the ICC,” Roque said.

The country has until September 8 to provide the ICC a response to ICC Prosecutor Karim Khan’s request to pursue the investigation, while the victims and their legal representatives have until September 22 to submit additional reports to the tribunal.

Should the ICC decide to continue with an investigation and even issue an arrest warrant against Duterte, Roque said the former president would seek a local court to order police not to serve the warrant against him.

“He will argue that the Philippine courts are able and willing to prosecute these cases and therefore there is no basis for foreign institutions to interfere. And this is a consequence of being a sovereign country,” Roque said.

He reiterated a long-standing position of the Duterte administration that he served under —  during which he defended the Philippines’ withdrawal from the ICC despite having lobbied for it — and said that the president will only face trial for his alleged crimes before local courts.

Duterte pulled out the Philippines from its ratification of the Rome Statute after the ICC declared that it wanted to investigate the allegations of crimes against humanity in the Philippines.

The Philippines withdrew from the Court in March 2018, which then took effect the following year. While Manila is no longer a part of the ICC, the international body is still allowed to conduct investigations in the Philippines.