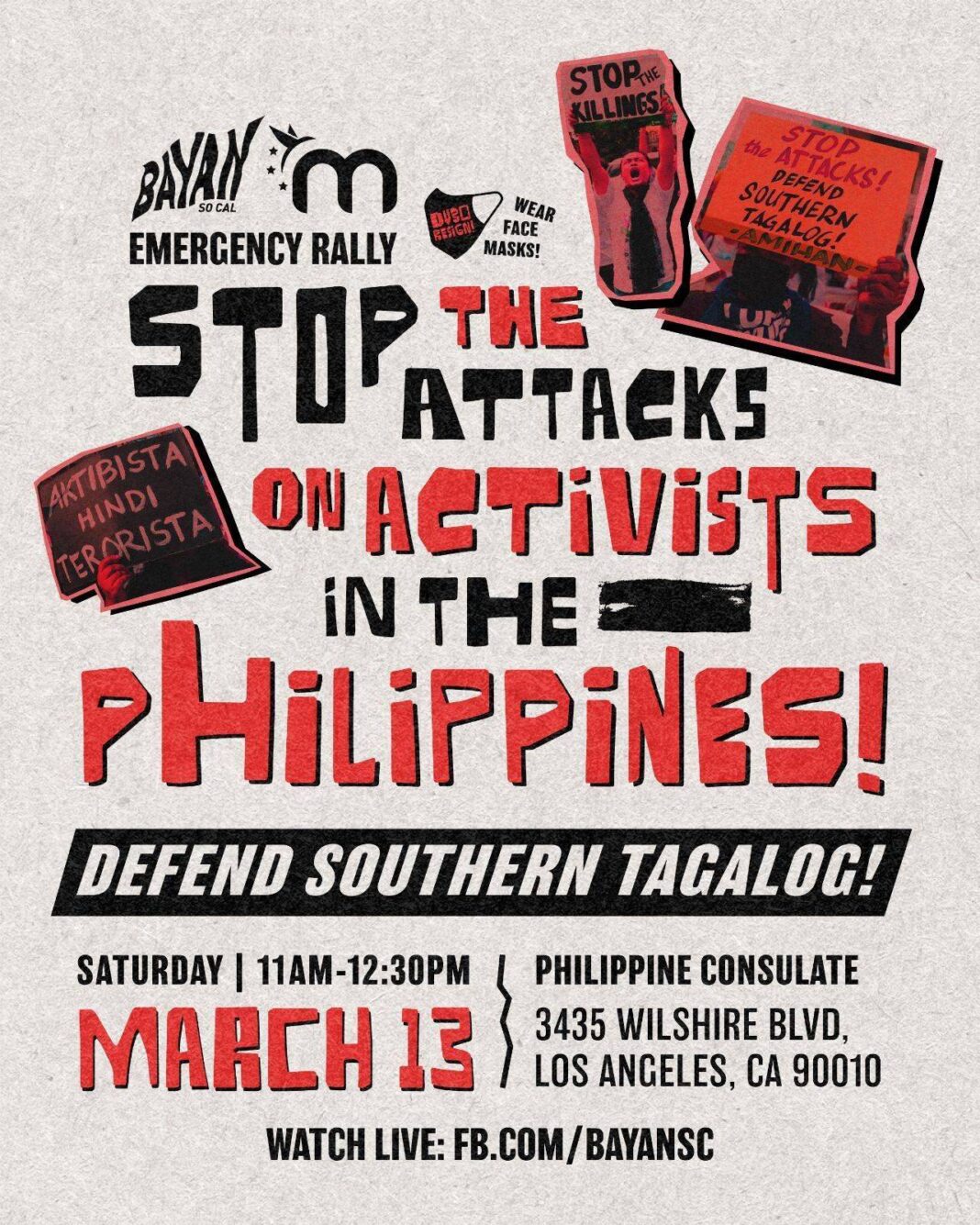 Over 400 plugged into Zoom and Facebook last Thursday for an online rally condemning the recent killing spree of activists in the Philippines by Philippine police and military in the Southern Tagalog region of the country.

Speakers from the Philippines gave first hand accounts of what has been taking place after President Rodrigo Duterte gave “shoot-to-kill” orders against communist rebels earlier this year in a style similar to the so-called Drug War being enforced by the Philippine National Police in the urban slums.

Dubbed “Bloody Sunday,” the killings of 9 activists and arrests of 6 activists affiliated with Bagong Alyansang Makabayan, or BAYAN, are the latest in an increasing wave of state repression of government critics under the Duterte administration. Under the Anti-Terror Act passed in 2020, many legal organizations, including BAYAN, have been summarily tagged as “communist-terrorists,” even though the communist insurgency is being waged in the far-flung regions of the countryside and in the mountains, not in the cities.

“To everyone in the US, our comrades here are righteous activists, who don’t have weapons in our offices, who fight for the poor and marginalized sectors in the region,” stated Casey Anne Cruz, spokesperson and regional coordinator for BAYAN Southern Tagalog.

Prior to Southern Tagalog, BAYAN-affliated activists were killed in Negros, Panay, Leyte, Metro-Manila, and Northeastern Mindanao in joint operations of the Philippine National Police (PNP) and Armed Forces of the Philippines (AFP).

“Our friends and comrades are good people. They are not terrorists. The Philippine government claims to wage its counterinsurgency against CPP-NPA [Communist Party of the Philippines-New People’s Army] who are in the countryside, but it directs its attacks on activists and service organizations in the cities and semi-urban centers,” stated Eleanor De Guzman of the Kilusang Mayo Uno (KMU), a national alliance of unions and worker centers in the Philippines, and member organization of BAYAN.

End US Support to the Duterte Regime

Several US organizations supported the rally and gave messages of solidarity, including the urgency to pass the Philippine Human Rights Act (PHRA) in Congress, which would suspend US aid to the Philippine government until human rights violations linked to state forces are investigated and those responsible are held accountable.

“We are complicit as we are giving our US taxpayer money, so we have got to end the US military support to the Philippines. Stop the attacks on our brothers and sisters. Words are cheap, it is the action that we must turn to,” rallied Shane Larson, National Legislative Director of the Communication Workers of America (CWA), a leading trade union in the US advocating for the passage of the PHRA in Congress. He urged other trade unions in the US to follow suit.

“Our struggle in the US as African Americans is for liberation,” stated Michael Sampson of the National Alliance Against Racist and Political Repression (NAARPR). “We see the same enemy funding a US puppet regime in the Philippines is the same enemy here in the US—and waging war against our people in the streets.”

Since Duterte took office, the US has sent over $550 million in military aid to the Philippines, with an additional $2 billion in arms sales in 2020 alone. Recently, the Pentagon sent a list of additional weapons and hardware to offer the Philippine government.

In late 2020, the PHRA was introduced by Representative Susan Wild (D, PA) of the House Foreign Affairs Committee with dozens of Congressional co-sponsors and hundreds of grassroots community endorsers. For more information on the Philippine Human Rights Act, visit humanrightsph.org. (from Malaya Movement, [email protected])