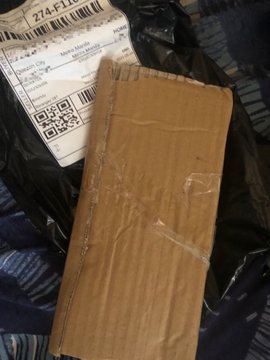 Filipinos were advised to be vigilant in buying Martial Law-related books and reading materials online following the reported surge of fake sellers claiming to have such copies.

This came after GMA News reporter Joseph Morong tweeted that he was scammed by a Shopee seller claiming to have a copy of “Press Freedom Under Siege: Reportage that Challenged the Marcos Dictatorship.”

The book is a compilation of more than 30 magazine and newspaper articles written by journalists who defied press repression during the waning years of the Marcos dictatorship in the ’80s. It was edited by veteran journalist Ma. Ceres P. Doyo.

At that time, the media was among those affected by the regime, according to a book’s description.

Meanwhile, Morong thought he was about to have a copy of the book, only to find out his online shopping turned out to be a scam.

“Ordered a book on Shopee. Seller sent me a cardboard,” he tweeted on May 26, attaching a picture of the item which was a rolled-up material made from a box.

Morong also shared a screenshot of how the book was marketed on the online shopping platform.

The shop name consisted of random letters and numbers. Its rating was also “N/A” or “Not Applicable” while it had a 57% chat response. It also had 993 supposed products listed.

A fellow reporter commented that she “hoped” Morong had already reported the seller.

“They banned the shop na,” he responded, attaching a screenshot of a notice from the platform. He also said someone who works at the e-commerce platform reached out to him.

The incident prompted other users to warn their fellow Filipinos about online scams, particularly involving such books.

Another Twitter user reminded the public to “remain vigilant and only buy from known, credible sources of Martial Law era books, whether bookstores or known small bookshops.”

“The potential of fishing our private information from Shopee orders is chilling to think about,” she wrote.

“There’s been a rise in the listings of Martial Law books and media on these platforms recently. Be careful, please. Best to just buy from trusted book sellers,” the user added.

“Idk (I don’t know), a dummy acct (account) would probably sell like a random book that’s more sellable (?) or any other item if the intention is to only take money, but why choose this title?” another online user asked.

“Maybe I’m being paranoid but we know how dirty and corrupt they are. Be careful, people,” she additionally claimed.

A different online user linked the official Shopee and Lazada accounts of UP Press, the book’s publisher.

Last week, a seller shared that there appeared to be a “panic buying” of books relating to Martial Law after Ferdinand Marcos Jr’s victory in the 2022 presidential elections.

“They are really worried and scared that the books will be pulled out and that everything will be revised,” Alexine Parreno told Reuters.

READ: ‘Protect the truth’: A Marcos return in Philippines triggers fear for history

A few days after the elections, a children’s publisher placed its “#NeverAgain” book bundle on sale. The titles are related to Martial Law and Marcos Sr.

A historian assured the public that “contingency plans” were “being drafted” amid concerns that sources related to Martial Law might be “banned or whitewashed.”

Martial Law is a nine-year period implemented by late dictator Ferdinand Marcos Sr. which saw the curtailment of civil liberties, extrajudicial killings and unsolved disappearances, media oppression and economic recession, among others.

London-based human rights organization Amnesty International said that “some 70,000 people were imprisoned and 34,000 were tortured; over 3,200 people were killed” during its imposition.

His son and namesake, Marcos Jr, has been proclaimed the country’s president-elect.