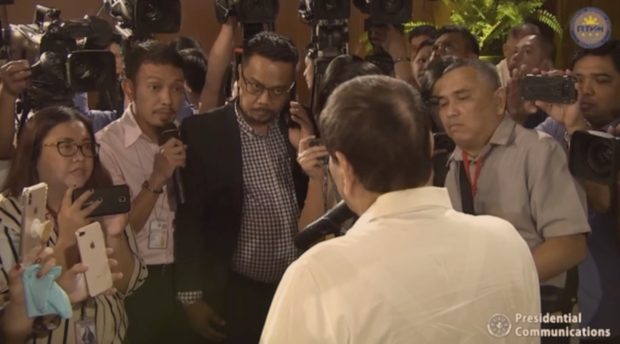 MANILA, Philippines — Several media and human rights groups on Monday condemn violence against media workers in the country as they called out the government for adopting an “unwritten policy of lawfare” that they said boosted the climate of impunity.

In a statement coinciding the 2020 International Day to End Crimes of Impunity Against Journalists, the Committee for the Freedom of Leila De Lima said it is joined by the Cebu for Human Rights, College Editors Guild of the Philippines, Consortium on Democracy and Disinformation, and the Asian Center for Journalism in “condemning all the killings, violence and attacks against journalists and media workers.”

“We likewise call out the government for adopting an unwritten policy of lawfare – the weaponization of the law and legal processes against democratic dissent and other fundamental freedoms – that has further engendered the climate of impunity, and largely enabled the continuing media repression in the Philippines,” they said.

“We urge the government to guarantee justice for the crimes and abuses against journalists. We further call upon the Philippine government and other States – including various sectors and organs of society – to promote an enabling environment for journalists to perform their work independently and in safety,” they added.

In making this call, the groups pointed out that democracy relies heavily on the ability of journalists to transmit information, report abuses, and contribute to public debate.

“When journalists are unable to do their work in safety, we ultimately lose our defense against propaganda, disinformation and misinformation. Killings and other crimes of impunity – which seek to silence journalists – are a serious threat to press freedom and free expression. These have to end if democracy is to survive,” the groups said.

They also noted that in the country, the recent years have seen the “unabated rise” in the number of killings, attacks, threats of violence and varied forms of intimidation and harassment—both online and offline—targeting journalists and media outlets. They also said female media practitioners were affected more severely.

With this situation in view, the groups said there is no wonder that the Committee to Protect Journalists’ 2020 Global Impunity Index ranks the Philippines seventh among countries where journalists are killed and their killers go free.

“Impunity emboldens other perpetrators and their masterminds. It further erodes the people’s trust in the legal and judicial systems, while indicting the government’s basic ability to support democracy and maintain peace and order in society,” they added.