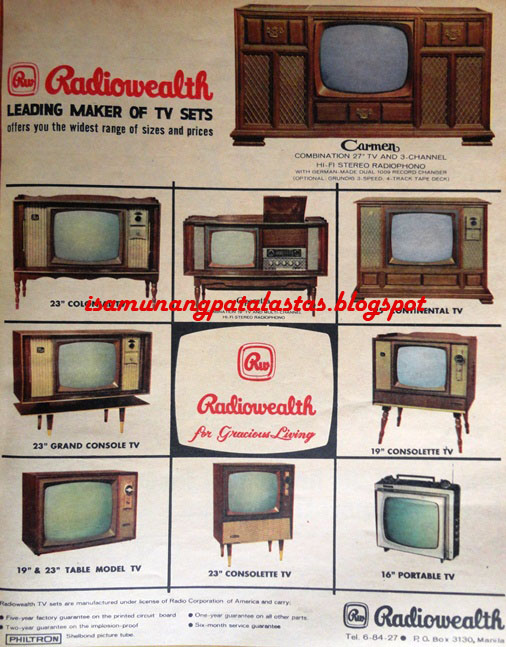 Domingo Guevara: The road to industrialization

MANILA, Philippines – Domingo M. Guevara Street, formerly known as Libertad, is one of Mandaluyong’s busiest thoroughfares. It is also the name of a self-made industrialist closely associated with a number of well-known brands in the 60s and 70s and who aspired to see the  Philippines become an industrialized country

Guevara founded Radiowealth, a brand of affordable Philippine-made radios, TVs and other appliances that dominated the local market prior to the advent of the Japanese brands. He also assembled Volkswagen vehicles initially in his Libertad, Mandaluyong plant, then made the brand a household name in the Philippines. This experience led him to create the first Filipino designed and fabricated vehicle called the Sakbayan in the late 60s.

At its height, the industrialist’s Guevara Enterprises or Guevent Group was engaged in manufacturing, electronics, communications, agriculture and industrial development, transportation and its own financing company, Radiowealth Finance, which continues to operate to this day through 80 branches all over the country.

He transformed his part of Mandaluyong into a dynamic center of light industry and the cradle of audacious ideas such as manufacturing a Filipino car. A great model for an aspiring Tiger City,Guevara, who passed away in the 90s, would have turned 104 years this January.

The business genius traced his roots to Camarines Sur, where he learned to be a radio technician through a correspondence course. Although fascinated by the radio, he made a living running the family farm. Fortunately for him, a dispute with a neighbor over the farm led him to move to Manila where he eventually set up a radio repair shop and transformed Radiowealth from a one-man, one-door affair to a dynamic manufacturing concern

In the early 60s,which was dominated by gas-guzzling American cars, Guevara identified the need for more fuel-efficient vehicles. He wooed Volkswagen Germany to allow his company in the Philippines to assemble its famous models like the Beetle and the Kombi. In a memoir Guevara wrote: Before DMG (his motor firm formally called Diesel Motors Germany Inc.) came into the picture, nobody had foreseen that the Filipino motorist would go for the small car. And when the demand came, DMG was about the only one ready to serve it with the Volkswagen brand.

As he built up his enterprises, Guevara also made available to the Philippine market a succession of machines and equipment helpful to agriculture, the military and other groups. These machines included various tractor models, diesel trucks of various makes and sizes, radio transceivers, and even computers and digital communications equipment. He also spotted the opportunities provided by new business models like the Avis car rental franchise, which he first established 40 years ago.

Reynaldo Guevara, the first president of Avis and chairman emeritus of Guevent Investments Development Corp., observes: Avis was a natural extension of the Volkswagen business. We started off with Volkswagen cars but have evolved since then.

Alejandrino Ferreria, a former DMG executive and current chairman of Avis Philippines, remembers working with Guevent founder Domingo Guevara: The industrialist’s passion to excel and to succeed later drove him to undertake forward and backward integration.

In addition to pioneering in the manufacturing of TV sets in the country, he also produced components like TV picture tubes and speakers.

National artist Nick Joaquin wrote about the peak of Guevara’s career in the early 70s: The first full-fledged auto manufacturer of the Philippines was selling up to 5,000 vehicles a year, was creating the first Philippine-made car, and was manufacturing picture tubes and other electronic components.

He had brought his country’s economy to a crucial threshold: the point of take-off for a NIC, a Newly Industrialized Country.

Then Martial Law was declared and all of Guevaraâ€™s plans were thwarted. Before the Marcos takeover backed up by military rule, Guevara had been elected a delegate of the 1971 Constitutional Convention who sought to promulgate programs that would jumpstart the industrialization of the Philippines. Being the man of principle that he was, Guevara was one of seven delegates that voted against the martial law constitution.

Soon after, Marcos representatives were asking the businessman if they could buy into his companies. Domingo Jr., Guevara’s third son, recalls in his father’s biography: I quoted a price to the emissary and asked if his principle could pay it. And the emissary said no, and that no price would be paid. I said: What do you mean? And he reported that I should feel flattered that President (Marcos) wanted to invest in our company.

When the senior Guevara made it plain that he was not interested in a one-sided partnership with Marcos and his cronies, his firms began experiencing problems with his bankers, and from the Bureaus of Internal Revenue and Customs. What could a businessman do? There was no way of fighting back (under martial law conditions), Guevara recalled in his biography.

He got to the point when he realized how futile it would be to fight for his enterprises. Had he held on, he would still have lost them. And if I let them in, I would lose the business just the same, since they, and not I, would be in control. All these pressures were beginning to affect my health. It became a choice of losing his business or losing his health. Guevara and his wife went into exile in the US.

Joaquin sums up the man’s contributions: In his time, there was a fascination with machinery, the start of a skill in electronics, a growing audacity in enterprise, more and more thrust into manufacturing, and an outright intent to make that great leap forward to industrialization. The Guevara era will remain an inspiration and a viable model for future generations.