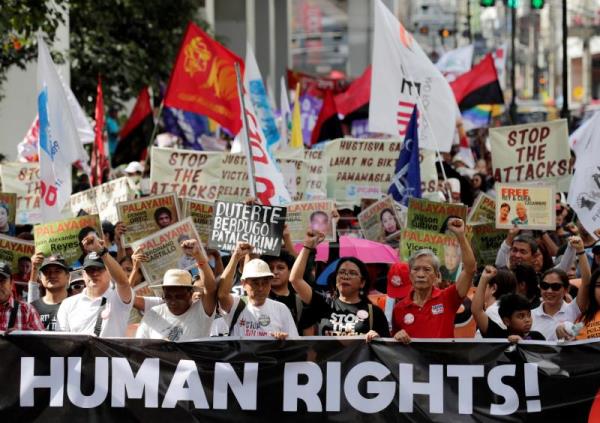 The International Coalition for Human Rights in the Philippines said in a statement that it will be working with the national governments of Australia, Canada, the US, the UK and the European Union for the imposition of Magnitsky sanctions on Philippine officials.

“In the absence so far of genuine accountability for these crimes through international mechanisms, such as the International Criminal Court and the UN Human Rights Council, ICHRP is launching a global campaign under national Magnitsky Acts to hold those responsible accountable for these widely documented crimes,” it said.

Countries that have Magnitsky laws may impose punishment, ranging from travel bans to financial sanctions, on foreign nationals responsible for human rights violations or corruption in a foreign country.

The US was the first to enact a Magnitsky law in 2012, three years after Sergei Magnitsky, a tax advisor who exposed corruption among Russian government officials, died while in prison.

Aside from Duterte, the coalition is calling for sanctions on Sen. Ronald “Bato” dela Rosa, both of whom ICHRP described as “architects of the war on drugs and campaign of state terror.”

When he was Philippine National Police chief, Dela Rosa spearheaded the anti-illegal drugs campaign called “Oplan Tokhang,” which led to the deaths of thousands of drug suspects.

Likewise, the ICHRP wants Sen. Bong Go, former presidential spokesperson Harry Roque, Judge Cecilyn Burgos-Villavert and Lorraine Badoy sanctioned for being “part of the infrastructure of terror in the Duterte administration and participated in the public orchestration of alleged state repression.”

“In the absence of justice, in the absence of domestic and international accountability, the proposed Magnitsky measures would afford some level of justice for those guilty of these heinous crimes,” former Australian Sen. Lee Rhiannon said.

In 2019, the US enacted an entry ban on foreign government officials involved in the “wrongful imprisonment” of opposition Sen. Leila de Lima, who has been behind bars for five years over drug charges she said are trumped up.

But for these sanctions to be implemented, the US State Secretary, who was Mike Pompeo at the time, had to come out with a list of people who would be targeted by the ban. It is not known if Pompeo or his successor, Antony Blinken, has done this. — Xave Gregorio