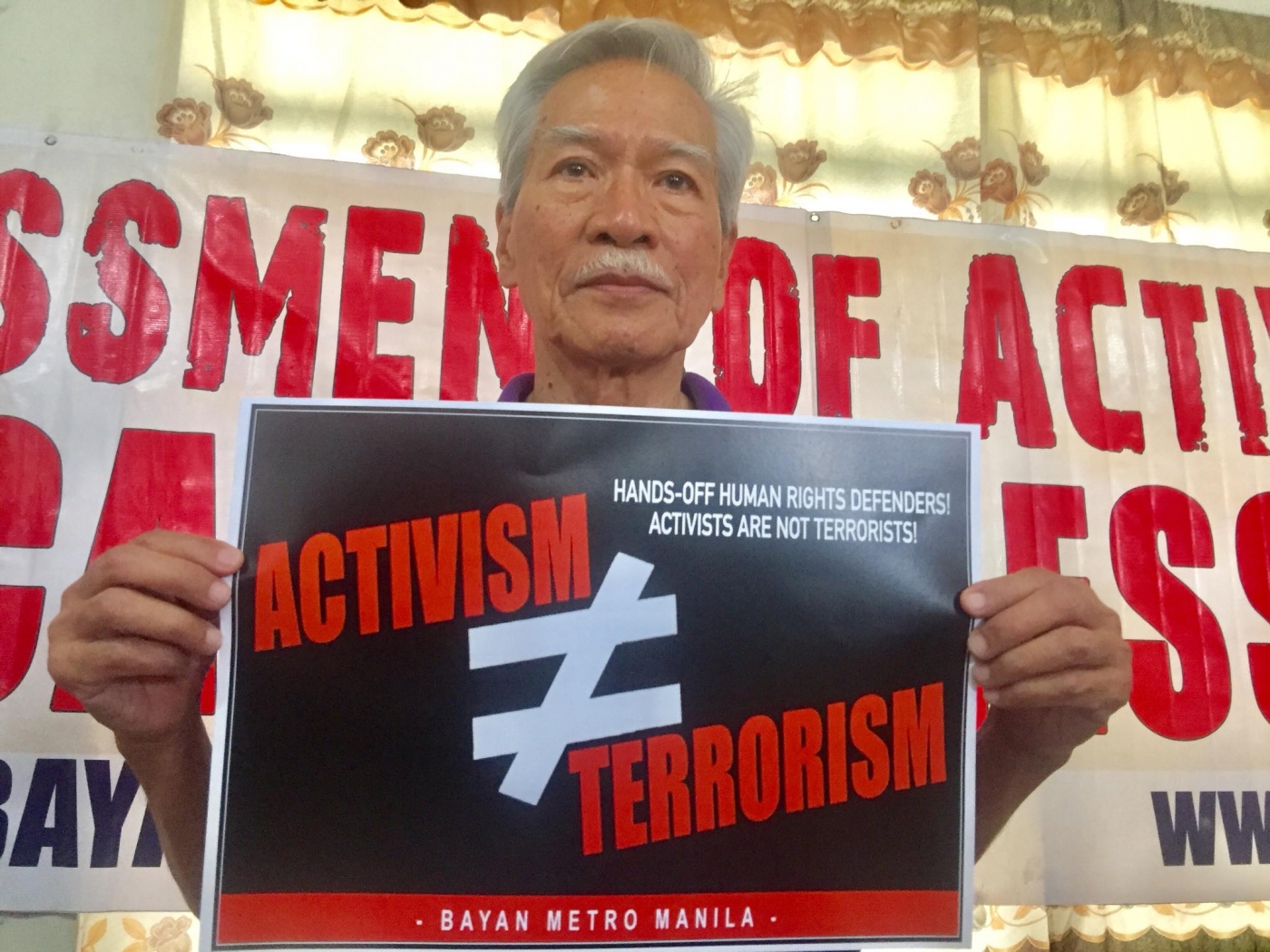 “I am not a terrorist, have never been nor ever will be a terrorist!”

This is the statement of former Bayan Muna Partylist Representative Satur Ocampo in a press conference held today in Quezon City as he vehemently denounced the Duterte administration for including him as one of the alleged ‘known officers’ of the Communist Party of the Philippines (CPP) and the New People’s Army (NPA). In his statement, Ocampo categorically denied any participation in the alleged terrorist acts cited to support the petition for proscription.

On February 21, 2018, Department of Justice (DOJ) Senior Assistant State Prosecutor Peter Ong filed a 55-page petition to proscribe the CPP and NPA at the Manila Regional Trial Court (RTC) Branch 19 which seeks to have the said groups as “terrorist organizations”.

Under the Human Security Act (HSA), the process for securing court approval for surveillance and freezing of assets is easier once the said organizations are judicially considered terrorist organizations.

Ocampo has been identified in the proscription petition “terrorist list” as one of the 656 members and officers of the CPP-NPA. Ocampo said that he was the first to receive a summon, order, and copy of the petition from the Manila RTC. As a reaction to this, Ocampo and his lawyers intends to challenge all the allegations that may be raised against him in proceedings that he hopes “shall truly observe due process.”

Ocampo stressed out, “In my life of nearly 79 years, I have been a publicly known journalist, three-term legislator, and a political activist for 46 years. I was a political prisoner under three different regimes – Marcos, Aquino, and Arroyo – for a total of 12 years.”

He continued, “Under those regimes, I faced and fought charges of subversion, rebellion, trumped-up charges for common crime charges. I have not been found guilty of any of these allegations.”

Ocampo also said that the DOJ’s proscription petition and the “terrorist list” is absurd, arbitrary, malicious, and dangerous. He said that persons named in the petition whose work or activities are legal could already be subjected to police-military surveillance, harassment and threats in various ways.

Bagong Alyansang Makabayan (Bayan) National Secretary General Renato Reyes said that this recent move of the administration is a clear attack and retaliation of Duterte against critics of his administration’s anti-people policies.

Out of the 656 names on the list, 5 personalities were peace panel members, 30 peace consultants, 16 were in detention, 79 women, 187 aliases, and dozens more with merely “John Does” and “Jane Does” identifications.

Indigenous groups Katribu ng Kalipunan ng Katutubong Mamamayan ng Pilipinas and the International Indigenous Peoples Movement for Self Determination and Liberation (IPMSDL) decried the inclusion of more than a dozen of their leaders and members of different indigenous tribes in the said terrorist list.

“Charges against indigenous leaders are not only false and fabricated but are baseless and malicious with intent to vilify, harass and intimidate the people struggling for their democratic rights and the indigenous communities defending their ancestral lands and asserting their rights to self-determination,” said Piya Macliing Malayao, secretary general of Katribu.

She continued, “It is meant to cripple the people’s mass movement in the country and criminalize the legitimate struggles of the people by proscribing them as terrorist acts.”

KALUMARAN secretary general Dulphing Ogan said most of these leaders are from indigenous communities fighting mining corporations and agribusiness plantations that are encroaching on their ancestral lands.

The group underscored that around half of 400 Mindanawons facing trumped-up charges are Lumad leaders. With the terror list, Ogan said that more fabricated cases are being readied by the Inter-Agency Committee on Legal Action (IACLA).

KALUMARAN also fears more Lumad killings are forthcoming on top of the 34 Lumad leaders already silenced by the Duterte administration.

“The inclusion of UNSRIP Corpuz and indigenous leaders is a desperate bid of this government to evade accountability for his ‘war against indigenous peoples’ in the Philippines,” he added.

Militant fisherfolk group Pamalakaya also condemned the inclusion of three of their leaders and organizers from Batangas in the list including Erlindo Baes, Elsie Lucero and Marilyn Hernandez.

Fight in all fronts

Bayan and its allied organizations said that they are set to counter this terror listing and proscription petition in all fronts.

Karapatan secretary general said, “Human rights defenders already have one foot in the grave, given the dangerous nature of their work. With Duterte’s terror list, this regime is intent on digging the grave and pushing rights defenders right into the pit.”

She added, “We call on all human rights advocates and the Filipino people to stay vigilant against such efforts to curtail our civil and political rights. The Duterte gangster regime is deiberately ignoring its obligations to promote and protect people’s rights.”

As an initial mass action against the terror list, Bayan said that they are set to hold a “Black Friday Protest” on March 16 at the DOJ main office in Manila. The group said that the rally will also be held in time for the 20th anniversary of the signing of the Comprehensive Agreement on Respect for Human Rights and International Humanitarian Law (CARHRIHL).

ACTIVISM IS NOT EQUAL TO TERRORISM. Satur Ocampo and other activists hold up placards bearing calls to stop terror tags against activists. Photos by Kathy Yamzon

“We got news – a real one – for Mr. Duterte and his gang: We will not be cowed. Not today, not tomorrow, not ever. So back off, human rights attackers, and hands off human rights defenders, lest you sow and create your own undoing. We will overcome and prevail. We are not terrorists, we are people who love our country,” said Elisa Lubi, Karapatan national executive committee member and is also one of the listed ‘terrorist’ personalities in the DOJ proscription.