In the belly of the beast 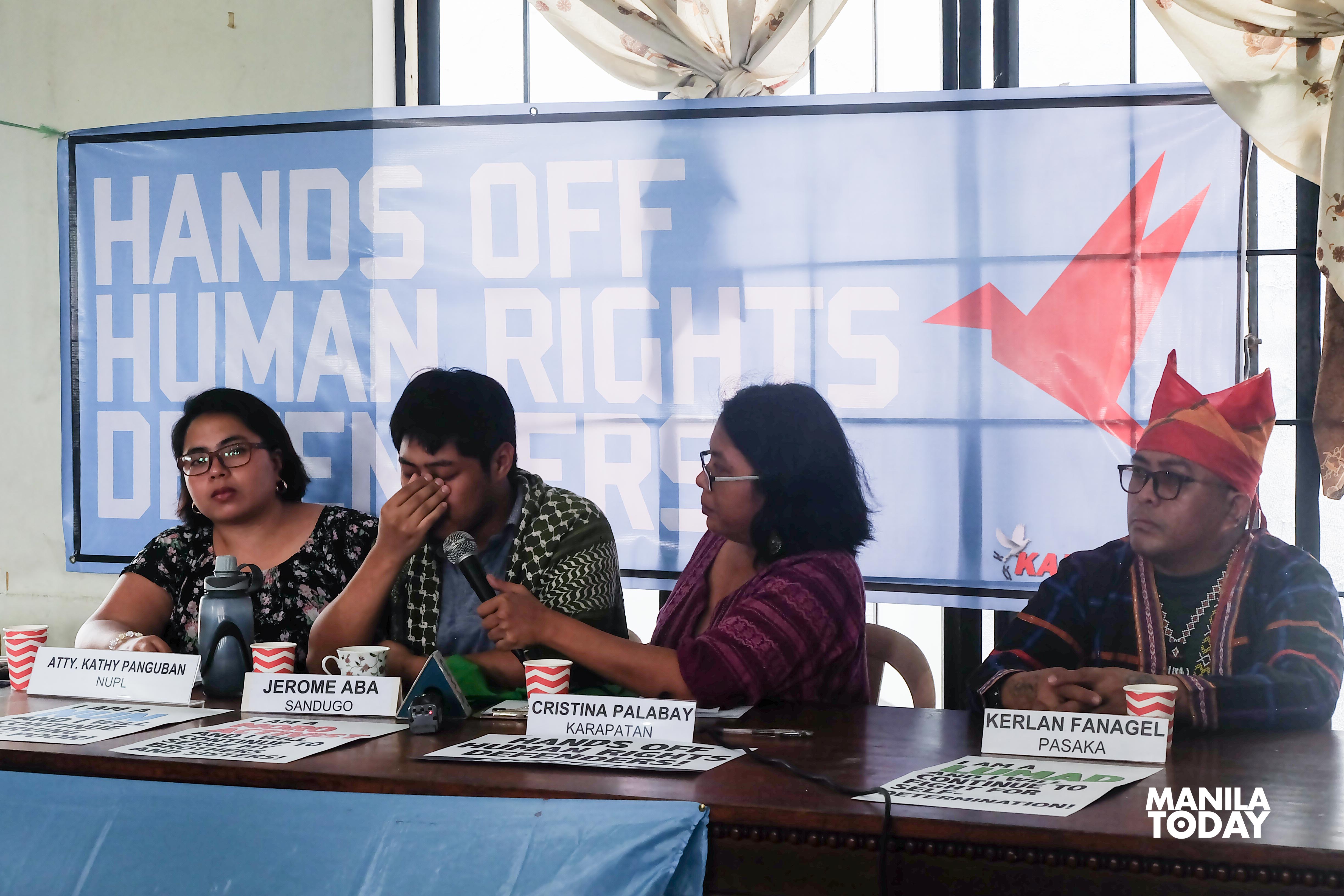 Human rights activist Jerome Aladdin Succor Aba didn’t once think that the interrogation and torture scenes he had been watching on television would one day be a reality for him.

[I’m not used to being the victim of gross human rights violations.]

Aba, 25, a Moro activist who co-chairs the Sandugo Alliance of Moro and Indigenous Peoples and serves as spokesperson for Suara Bangsamoro, was detained for 28 hours on April 17 to 18 at the San Francisco International Airport.

Upon being invited by the United Methodist Church and the Sisters of Mercy of America, he was sent by the International Coalition for Human Rights in the Philippines (ICHRP) to shed light on the human rights situation in Mindanao. Aba was tasked to talk to religious groups and United States government officials in Washington D.C. about the plight of the Moro and indigenous peoples under martial law in the Philippines’ southernmost island.

However, U.S. Customs and Border Protection officers apprehended him at Immigration, confiscated his VISA and luggage, tied plastic cuffs around his wrists, and brought him to five different rooms where he was subjected to physical and psychological torture.

He was denied the opportunity to speak with colleagues, family members, and friends back in the Philippines.

An officer of Homeland Security whose nameplate read Reyes asked Aba about his views on the Duterte administration’s war on drugs, martial law in Mindanao, and relations between the U.S. and the Philippines. The officer was wearing a vest and carried two firearms. Aba recalled enumerating to Reyes the number of civilians killed or displaced because of martial law atrocities. He also told the officer that military and trade relations between the U.S. and the Philippines remain favorable to the former and result in countless human rights violations in the latter.

Aba was escorted to another room where another officer with the nameplate Lopez was waiting. The man inspected every item in Aba’s luggage. Upon finding from among his things a surban (shawl), tubaw (headscarf), and malong (wrap-around garment), as well as some photos of Aba with Filipino activists, Lopez was convinced that Aba was a terrorist and coaxed him into admitting that he is.

“Are you a terrorist? Are you a communist?” the officer asked, as Aba narrated.

He remembered saying to the officer: “I am a human rights worker. I am an activist. I do not belong to any armed organization.”

After that, he was brought to another room. The room was empty except for a desk and chair. On the desk was a .45 caliber handgun and a mobile phone. Aba sat on the chair and couldn’t remember how long he pretended to be asleep until he was again escorted to another room.

“They ordered me to undress,” Aba recounted.

Upon asserting his rights under the United Nations Universal Declaration of Human Rights, a Homeland Security official told him: “You are not entitled to any rights here”.

Standing naked in an air-conditioned room with an industrial fan on full blast in front of him, Aba was forced to admit that he was a terrorist.

But Aba had nothing to confess, and the Homeland Security officials were in a hurry to finish their shift.

By the time he was taken back to the lobby of Homeland Security, Aba was already very hungry. The last time he had a rice meal was before he left for San Francisco Monday night. An official asked him if he wanted something to eat, to which he replied that any food would be fine as long as it wasn’t pork. The official came back with a ham sandwich.

The next room Aba was brought to was similar to the third one, having only a desk and a chair as the main fixtures. A hand grenade was placed neatly on the table. Aba again pretended to doze off.

[I didn’t know what message they wanted to convey. Maybe they thought I would set the hand grenade off, like suicide bombers.]

Another round of interrogation ensued. Lopez asked the same questions over and over. Aba recalled Lopez saying to him: “Be good. If you do anything bad, I will not hesitate to shoot you.” He also remembered how Lopez would reach for his hand gun if Aba didn’t look him in the eye when he was asking questions.

Before releasing him, Lopez made Aba sign a blank document. He signed it and tried to discreetly write “U.P.”, meaning that he was coerced into signing. Lopez noticed the initials and made Aba sign another document and also obtained his electronic signature on a tablet.

Returning to the Philippines

[When it was announced that we were only 30 minutes away from Manila, I felt a mix of fear, dread, and excitement. I was finally coming home, away from the torture I went through in the U.S. — in the belly of the beast.]

Aba couldn’t say anything to them, his words stifled by his sobs. But he managed to mouth to them: “Pinahirapan nila ako.”

[They gave me a hard time.]

In a Facebook post Friday night, Aba cited the Department of Homeland Security’s repressive immigration measures against him.

Asalaamu Alaykum!I can’t express how much I appreciate your kind thoughts and support all throughout the two-day…

When news of Aba’s ordeal reached fellow activists, progressive groups in the Philippines and the U.S. held several decentralized protests and called for #Justice4Jerome on Twitter.

We stand with Jerome Succor Aba and all human rights defenders! ICHRP-US Northeast and Malaya are outside DHS at 201 Varick. Join us! #Justice4Jerome #StopTheKillingsPH pic.twitter.com/5zC4jdeZos

Human rights lawyers in the Philippines and the U.S. are looking into filing complaints to the Commission on Human Rights, the Joint Monitoring Committee of the GRP-NDF (Government of the Philippines-National Democratic Front) under the CARHRIHL (Comprehensive Agreement on the Respect for Human Rights and International Humanitarian Law), and the United Nations through the U.N. Special Rapporteurs.

Defending rights not equal to terrorism

Aba, with fellow rights defenders Sr. Patricia Fox and Kerlan Fanagel, are recent targets of the Duterte government’s crackdown against its dissenters.

Sr. Fox, an Australian missionary doing work in the Philippines for 27 years, was put under the custody of the Bureau of Immigration early this week for allegedly being an ‘undocumented alien’ and for ‘participating in political activities’.

Fanagel was supposed to represent indigenous groups in a human rights conference in India in February but was held at NAIA 3’s immigration for having an active case filed against him. Despite presenting papers of the case’s dismissal in 2016, airport officials cancelled his boarding pass. Fanagel is the chairperson of PASAKA Confederation of Lumad Organizations in Southern Mindanao Region and the spokesperson of Kalumaran.

The Human Security Act, through an order from the Court of Appeals, authorizes the Philippine government to conduct surveillance and wiretap the communication lines of whom it considers terrorists. The government can also seize, sequester, or freeze the bank accounts of terrorist organizations.

“For the supposed champions of democracy and civil liberties, cases such as Aba’s show the U.S.’ true colors — that they themselves are the foremost violator of human rights…the same can be said of the Philippine government who denies the Filipino people their basic rights by using labels to demonize their victims and move the discourse away from the rampant violations on the ground,” Palabay said in a statement.

On Thursday, the European Parliament adopted a resolution condemning the slew of state-perpetrated human rights violations in the Philippines, which includes extrajudicial killings under Duterte’s drug war, the terror tag on 600 individuals in the proscription petition, and violence against indigenous peoples in Mindanao. The resolution also welcomes the ICC’s (International Criminal Court) move to hold a preliminary investigation on the government’s anti-drug campaign which has left thousands dead.

The post In the belly of the beast appeared first on Manila Today.