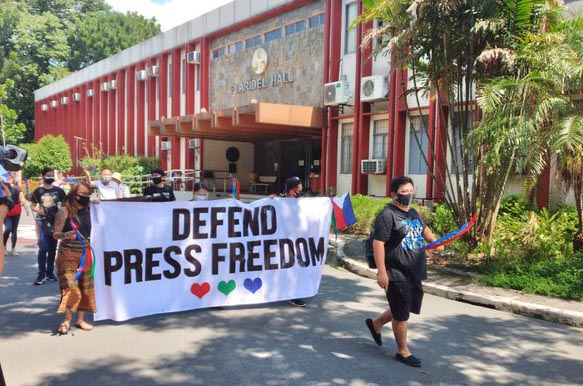 “Never since the late unlamented Marcos dictatorship has a president ever deigned to shut down the independent media and stifle criticism and dissent.”

MANILA– For the first time, former ABS-CBN senior correspondent Ces Drilon went to a protest not to cover the event but to speak before the crowd.

With her voice shaking, the veteran journalist read her prepared speech in Filipino. “I am standing here as a representative of the Filipino people who should have been enjoying freedom of the press,” she said.

“Freedom of the press is an important foundation of our democracy,” Drilon told thousands who gathered at the University of the Philippines in Diliman, Quezon City hours before President Rodrigo Duterte delivered his fifth State of the Nation Address. “It is a right of every Filipino, and it is not a privilege, as said by our president.”

Drilon said the media serves as the voice of the ordinary citizens, whose pleas are continuously ignored by government. The media, according to Drilon, also has the duty of uncovering the abuse and corruption of those in office.

Listen. @cesdrilon explains why the shutdown of ABS-CBN is an attack on press freedom. https://t.co/fx8iKrmadO

She spoke as one of the media workers who lost her job after broadcasting company ABS-CBN’s franchise bid was rejected by the Committee on Legislative Franchises last July 10. Many of them also joined the protest dubbed as #SONAgkaisa, waving red, blue and green ribbons.

Drilon dismissed claims that the ABS-CBN closure is not an attack on press freedom as the company’s digital channels are still open. “While that is true, this option will only be possible for people who have an internet connection,” said Drilon. “What about the almost 70 million Filipinos who only have the radio and the television as their sources of information? They can no longer hear our reports.”

Drillon also expressed her worry that media companies would be afraid to report the truth after what happened to ABS-CBN. “What happened to us is a message: report and you might suffer the same fate,” she said.

To the Filipino people, she appealed, “Do not believe social media posts that say the closure of ABS-CBN is not a denial of our right to press freedom. Defend press freedom.”

Before the program at UP Diliman, ABS-CBN workers and supporters gathered once more in front of the gates of ABS-CBN in Sgt. Esguerra Avenue. The Association of Major Religious Superiors in the Philippines (AMRSP) held a short program.

At least 40 vehicles took part in the motorcade from ABS-CBN to UP Diliman.

In a separate statement, the National Union of Journalists of the Philippines said that the media remains under siege during Duterte’s fifth year.

The group cited the rejection of ABS-CBN’s franchise, the legal assault on Rappler, red tagging of journalists and the recent seizure of thousands of copies of Pinoy Weekly by Pandi police.

“Never since the late unlamented Marcos dictatorship has a president ever deigned to shut down the independent media and stifle criticism and dissent,” said the group.