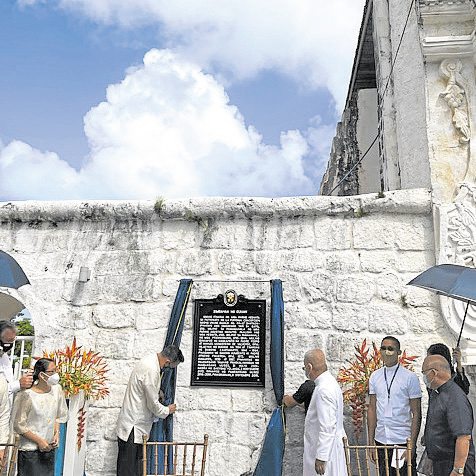 Today, Palm Sunday, the people of Guiuan in the southern tip of Eastern Samar are expected to make their way to their beloved Immaculate Conception Parish Church with an extra spring in their step.

Renewed lockdown restrictions due to surging cases of COVID-19 prevent other Roman Catholics in Metro Manila and its neighboring provinces in Luzon from going to places of worship for the second Palm Sunday in a row. But the people of Guiuan are free as one flock to mark the beginning of the most important week in the Catholic liturgical calendar, albeit with masks and proper physical distancing.

And they will do so in their church that was recently given its own marker by the National Historical Commission of the Philippines (NHCP), in recognition of not just its stature as one of the finest examples of Spanish colonial church architecture but also of its special place in the history of Christianity in the country.

As NHCP Chair Rene Escalante said in a speech at the unveiling of the marker on March 18, the town of Guiuan was “the figurative portal through which the Christian faith arrived in our shores five centuries ago, when the fleet under Ferdinand Magellan’s command anchored on the islands of Suluan and Homonhon after months spent adrift across the Pacific.”

The ceremony was part of the celebration in the town of the Philippine part in the first circumnavigation of the world and the beginning of relations between Spain and the Philippines with the arrival of the Magellan-Elcano expedition in 1521.

“By our unveiling of a historical marker, the historical significance of the site becomes visible for all to see,” Escalante said. “Every parishioner and pilgrim who pass through the doors of this church shall be afforded the opportunity to learn the history of how this place became the intersection of nations and cultures.” Indeed, the Immaculate Conception Parish Church, or Guiuan Church, expects to welcome more than the usual number of pilgrims and parishioners with its being named one of the special jubilee churches by the Catholic Bishops’ Conference of the Philippines. The recognition is part of the celebration of the 500th year of Christianity in the Philippines, the largest predominantly Roman Catholic nation in Southeast Asia.

The Catholic Church in the Philippines will formally inaugurate the yearlong celebration of the quincentennial of Christianity with the theme “Gifted to Give” on April 4, Easter Sunday, when the “Holy Doors” of pilgrim churches will be opened. The celebration will end on April 22, 2022.

The 18th-century church that dominates the Guiuan landscape is one of 537 pilgrimage churches in 85 dioceses across the country to be granted the privilege of being a jubilee church where Catholic pilgrims can receive plenary indulgence, or the total removal of God’s punishment for sins that had already been forgiven.

Guiuan was one of the first parishes to be formally established on the island of Samar upon the arrival of the first Jesuits led by Fr. Francisco de Otazo in 1595.

The church was under the Jesuits for the next century until 1768, when King Charles III of Spain decreed the suppression of the Society of Jesus.

The Augustinians took over and, in 1805, were replaced by the Franciscans, who completed the church in 1844 and stayed until the end of Spanish colonial rule in the Philippines, when Filipino diocesan priests took over.

Guiuan Church is considered one of the best examples of baroque church architecture and the only one decorated by natural shells and corals as well as “azulejos,” or Spanish glazed ceramic tiles.

It was recognized as a national cultural treasure by the National Museum of the Philippines in 2001, for its “outstanding historical, cultural, artistic and scientific value which is highly significant and important to the country and the nation.”

In November 2013, Guiuan Church was practically leveled by Supertyphoon “Yolanda” (international name: Haiyan) which made its first landfall in the town packing winds that reached speeds of up to 380 kilometers per hour.

It was painstakingly restored to its former glory in just six years and rededicated in 2019 through the herculean efforts of the National Museum, US Ambassador’s Fund for Cultural Preservation, the Diocese of Borongan, and heritage advocacy partners and private donors in the Philippines and abroad.

But Guiuan Church’s historical marker is not just about “a beautiful building we call a church,” according to the diocese of Borongan.

Said Fr. Edwin Lanuevo, Guiuan’s parish priest: “Rather, this historical marker invites us to see Christianity’s rootedness that can never be ignored and removed at our whims and caprices. The testimony of this marker goes deeper to see how Christianity, symbolized by this Church, had and continues to have an impact on our nation’s consciousness, and, in particular, on the life of our people here in Guiuan both collectively as a community and personally as individuals.

“It is our desire that this historical marker would help us become more aware of humanity’s limitless potential realized in history and humanity’s profound aspiration to go beyond [itself], to transcend the here and now of history. In other words, to meet God, which for us Christians is to encounter Jesus.”