MARCOS IS NOT WELCOME HERE! 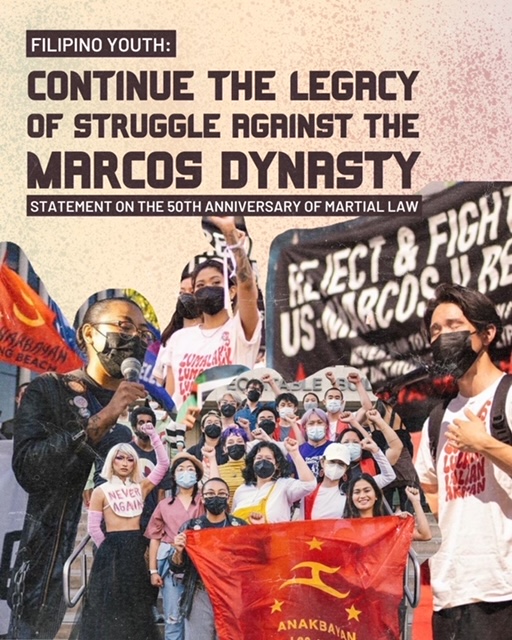 Malaya Movement USA STATEMENT ON MARCOS JR.’S VISIT TO THE U.S. AND THE UN GENERAL ASSEMBLY

Malaya Movement USA denounces Marcos Jr.’s visit to the U.S. and his invitation to speak at the United Nations General Assembly. It is an insult that he will be speaking on the world stage on the day Martial Law was declared 50 years ago in the Philippines by his father, namesake, and former dictator-in-chief, Ferdinand Marcos Sr.

Marcos Jr.’s tour around New York City is a slap in the face of the Filipino people, given that the paper trail of plundered public funds by the Marcoses includes Marcos Sr.’s purchase of four New York City buildings as a gift to wife Imelda, while the dictatorship plunged the Philippines into mass joblessness and debt that is still being paid off by the Philippine people over three decades later.

Marcos Jr.’s visit to the U.S. is in violation of a contempt order charged against his family’s estate by the US District Court of Hawaii which prohibits Marcos Jr. from stepping foot on U.S. soil. Regretfully, he is now protected by diplomatic immunity awarded to heads of state and can move freely in the U.S. This is a shameful legacy to be held by the so-called president of the Philippines.

We call on Malaya Movement USA members and our allies to make sure Marcos Jr. knows that he is not welcome here. Like those who paved the way in the 70s and 80s for the anti-dictatorship movement in the U.S., we must now follow in that tradition and ensure that Marcos Jr.’s visit will not go without massive protest. Let us ensure that we echo the Philippines’ mass outcry wherever they go. This visit, as will the remainder of their term, will be met with dissent no matter what else they do to try to ban democratic expression.

Take Action with Malaya Movement USA during our month long commemoration of the 50th anniversary of the declaration of martial law by:

1) Attend a local action near you: neveragainneverforget.org

2) Sign onto the Martial Law 50th Commemoration: Unity Statement of Filipinos in the US: tinyurl.com/ml50unitysignon