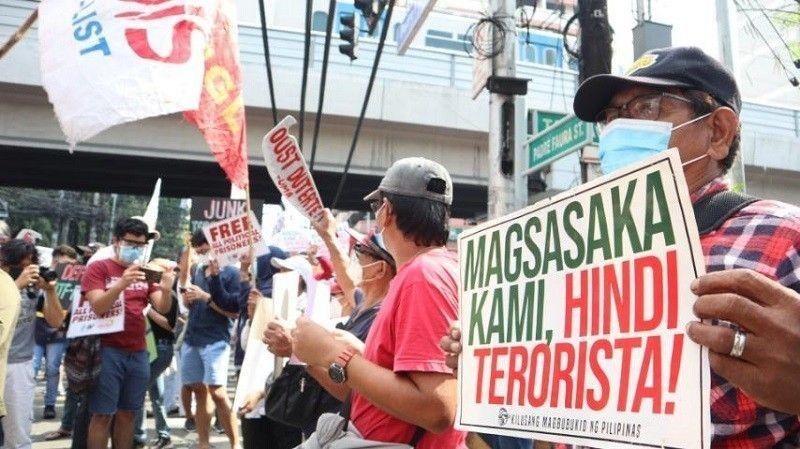 MANILA, Philippines — The government’s anti-communist task force and the National Commission on Indigenous Peoples — a member of the task force — welcomed the dismissal of raps against two Aeta farmers filed by military personnel who accused them of being communist rebels.

In a joint statement, the National Task Force to End Local Communist Armed Conflict and the NCIP welcomed the dismissal of the violation of the Anti-Terrorism Act of 2020 case against Japer Gurung and Junior Ramos.

“The decision has clearly shown that our justice system works, hears and decides cases fairly, without fear or favor,” the two agencies said.

The Olongapo Regional Trial Court Branch 97 granted Gurung and Ramos’ Demurrer to Evidence, filed through the Public Attorney’s Office, and held that the prosecution failed to “discharge the burden of providing the identities of the accused as the perpetrators of the crime of violation of Section 4 of [Republic Act 11479].”

The court noted “material inconsistencies” in the affidavit and witness testimonies of two soldiers and held that the arrest of Gurung and Ramos was invalid.

In same statement, the NTF-ELCAC and NCIP went on to red-tag rights alliance group Karapatan and accused it of “exploiting” the case against Gurung and Ramos to boost the call to void the Anti-Terrorism Act of 2020.

“Both the NTF-ELCAC and the NCIP ceaselessly worked together to remove our IP brothers from the exploitative clutches of the CPP-NPA-NDF including their front organizations, like Karapatan, so that their case will the justly heard under our system of laws,” the joint statement read.

The National Union of Peoples’ Lawyers, a legal assistance group that has also been red-tagged by the government, had been representing the Aeta farmers before NCIP and the PAO swooped in to take the case over.

NTF-ELCAC and NCIP claimed activist groups were “exploiting this case” to drum up resistance against the Anti-Terrorism Act. But it was personnel of the Armed Forces of the Philippines that filed the case against the two farmers in the first place.

IPs as petitioners against anti-terrorism law

Indigenous peoples are among the petitioners against the anti-terrorism law before the Supreme Court. The group led by Kalipunan ng mga Katutubong Mamamayan ng Pilipinas officer Beverly Longid, then told the court that “inextricably and inexplicably linked to the right to self-determination is the right to oppose, criticize, and dissent from development aggression and the policy of militarization that comes with it.”

Faced with IP opposition to so-called development projects on ancestral domain, state forces have often resorted to red-tagging, the petitioners said. After they are accused of being communists or terrorists, it would then be easy for military and paramilitary forces to “silence or cause untold human rights abuses on vocal dissenters, and thereby subdue the indigenous peoples’ assertion of their rights.”

“The passage of RA 11479 will even potentially increase the instances of this red-baiting on three grounds: its vague provisions, its disregard for the context of the indigenous peoples, and its giving more power to State forces, most of whom have been at the forefront of the abuses against the indigenous peoples,” the IP petitioners added.

Lawyer Marlon Bosantog, NTF-ELCAC spokesperson for Legal Affairs and IP Concerns, told reporters in a message that the task force has “no plan at this point” to file charges against the soldiers who filed complaints against Gurung and Ramos.

The Armed Forces of the Philippines is also a member of the NTF-ELCAC.

In their petition filed and later junked by the Supreme Court, the Gurung and Ramos said they were fleeing with their families in August 2020 when, after sharing a meal with soldiers, they were told they are under arrest for being NPA members.

They said they were tortured and forced to confess to being NPA members.

Lt. Gen. Antonio Parlade, task force spokeperson at the time, accused Inquirer.net reporter Tetch Torres-Tupas in February of writing “propaganda” when she wrote about Gurung and Ramos’ SC filing where they also told the court that they were tortured while in military detention.

He also incorrectly claimed that Torres-Tupas used Human Rights Watch and alternative media Kodao, which he tagged as “propaganda machines of the CPP” as reference in her article, when she only cited the pleading filed before the high court.

In a statement in September 2020, the AFP denied allegations of torture, saying the operations in San Marcelino were legitimate and done by the book.

“Among those apprehended during the operations were Communist Terrorist Group (CTG) members belonging to the same IP community who perpetrated the baseless accusations of human rights violations,” the Philippine News Agency quotes Maj. Gen. Edgard Arevalo, AFP spokesperson at the time, as saying.

Bosantog said they will look into how the two Aeta farmers would want to move forward. “What I understand is that they, and the community, will help in the peace initiative of the government to remove violence in their ancestral lands,” he added. — Kristine Joy Patag