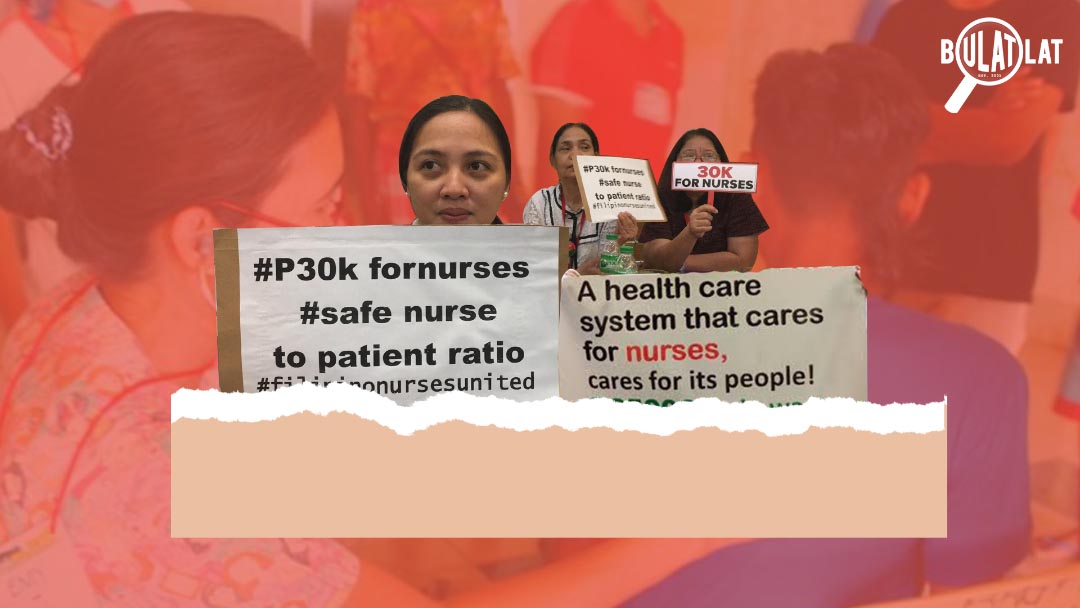 MANILA, Philippines—National Nurses Week recently gained more relevance as more Filipino nurses resigned and searched for greener pastures overseas out of frustration at being showered with praises but denied better pay and benefits.

More than a year has already passed since the pandemic landed on Philippine shores but the country’s nurses continued to air the same grievances and woes even as they were being hailed by the government as heroes in scrubs.

As the pleas of the overworked and exhausted nurses continued to fall on deaf ears, some are lured to just quit and try their lucks overseas.

According to the 2015 Census of Population by the Philippine Statistical Authority (PSA), there were around 488,800 total health professionals in the country.

The 2018 National Migration Survey (NMS) noted that of the total health care workers in the Philippines, the majority, or 59 percent, were nurses.

Data in 2017 from the World Health Organization (WHO) said there were 90,308 nurses in the Philippines.

In terms of government nurses, the 2019 Philippine Statistical Yearbook of PSA listed 5,975 total by 2018.

These numbers, however, were pre-COVID.

When the pandemic began, Filipino nurses were among the medical professionals thrust to the frontline of the battle to keep COVID-19 cases from getting out of control.

Underpaid, uncompensated, and overwhelmed by working long shifts, some nurses — as early as June 2021 — decided or were at least tempted to quit their jobs.

The high COVID-19 case count in the country, paired with the slow release of benefits for health workers amid high demand for Filipino nurses abroad have already enticed many to leave.

According to a 2005 study by the International Labour Office (ILO) the migration of nurses, doctors, and other medical professionals can be attributed to several “push” and “pull” factors.

The push factors are:
• economics
• working conditions
• socio-political factors
• financial reasons
• ‘deteriorating condition’ in the home country
Most health workers seeking jobs abroad admit they do it for their children and families.

Until now, the exodus of nurses continues to worry many as it might further strain the country’s health care system that some feared could soon be on the brink of collapse.

“If we don’t stop their departure, maybe in another six months we might run out of nurses and our health facilities and healthcare system will be crippled,” said Dr. Jose Rene De Grano, president of Private Hospitals Association of the Philippines Inc. (PHAPI), at a recent Laging Handa briefing.

De Grano said at least five to 10 percent of private health care workers had already resigned from their jobs to pursue work abroad.

The St. Luke’s Medical Center (SLMC), one of the prominent hospitals in the country, reported last August that its Quezon City branch was lacking 127 nurses.

That same month, 88 health workers in SLMC QC held a mass walkout to protest the government’s delay in disbursing their benefits such as the special risk allowance.

The hospital’s branch at Bonifacio Global City in Taguig was not spared by the mass resignation as the number of nurses in its emergency rooms has declined from 66 to 43 during the same month.

According to Benjie Foscablo, secretary of the nurses’ union at St. Luke’s Medical Center in BGC, aside from jumping to jobs offered abroad, some nurses moved to business process outsourcing companies or as company nurses, where “you earn more and without being on the bedside.”

Some nurses cited exhaustion. As manpower continued to shrink, the remaining nurses are left with 12 to 16 hours of work shift per day.

Nurses, during the celebration of Nurses Week, took to the streets to protest their grievances including delayed benefits from the government.

READ: Nurses start countdown to 10-day deadline for their benefits

In 2020, President Rodrigo Duterte signed and issued Administrative Order (AO) No. 36, granting active hazard duty pay (AHDP) of up to P3,000 per month to all health care workers.

The AO covers allied medical staff and other personnel in the public sector serving at the frontlines during the COVID pandemic. It is also exempted from income tax and will be in addition to any other similar benefits under existing law, issuances, and rules and regulations.

Another AO was also approved granting a special risk allowance (SRA) not exceeding P5,000 per month to public and private health workers directly serving or are in contact with COVID patients.

A P9.02-billion budget allotted for another tranche of SRA for health care workers was already released by the end of June, according to the Department of Health (DOH) and Department of Budget and Management (DBM).

The DOH and DBM, in a joint circular, said that allowances, not exceeding P5,000 a month, will be given to “public and private health workers who directly cater to or [are] in contact with COVID-19 patients.”

The SRA is prorated “based on the number of days that the public and private health workers physically report for work in a month.” This attendance record should be “certified by the head of the hospital, laboratory, or medical and quarantine facility, or his/her authorized representative, reckoned from Sept. 15, 2020 until June 30, 2021,”

However, despite the release of funds and after several orders and issuances, many health care workers protest that they have not yet received the benefits that are due them.

The figures, according to Andamo, were based on a survey conducted by FNU with respondents from both public and private health care facilities.

Last September, amid growing protests among health care workers due to unreleased benefits, the health department said it had already disbursed P14.3 billion worth of benefits for public and private health workers.

According to DOH, P6.4 billion was released for Period 1, which included:

On the other hand, DOH said Period 2 covered 2.4 million health workers who received P6.9 billion worth of SRA. At least 32,281 medical personnel were also covered with life insurance amounting to P16 million.

Aside from that, P570 million worth of checks were issued to 24,034 medical front liners as COVID-19 sickness and death compensation.

This was announced by the DOH after the end of the 10-day countdown set by health care workers for the release of their benefits.

READ: Nurses start countdown to 10-day deadline for their benefits

Still, Jao Clumia, president of the St. Luke’s Medical Center Employees Association, said there were many nurses and health care workers who have not yet received the benefits that were promised to them.

Aside from delayed SRA and AHDP, the mass resignation of health care workers — including many nurses — was driven by small pay for big work.

According to Jossel Ebesate, All-UP Workers Union president and former nurses’ union president at the Philippine General Hospital (PGH), some nurses in private hospitals began resigning in 2020 to transfer to PGH, which offers higher pay.

Nurses in private hospitals and facilities earn minimum wage, around P537 per day. Nurses in public hospitals benefit from the salary standardization law with a higher entry rate.

Data from the Department of Labor and Employment (DOLE) showed the following estimated salary or compensation for nurses in the Philippines:

While some nurses move to other hospitals that can offer them better pay and secure their benefits, some have decided to work abroad.

The rate offered for nurses overseas, according to DOLE, are as follows:

“I felt that I was not earning enough,” she said in the report.

Mass resignation, career changes, and deployments were not the only reasons behind the decreasing number of nurses in the country.

As COVID-19 continues to plague the country, many nurses have lost their lives, falling victims themselves to the disease which has no known cure yet.

Data from DOH showed that as of Oct. 19, a total of 27,018 health care workers have contracted or were infected with SARS-CoV-2, the virus that causes COVID-19.

Of the sum, at least 224 remained to be active cases. These included: