OFWs in Quarantine: Desperate and Distressed 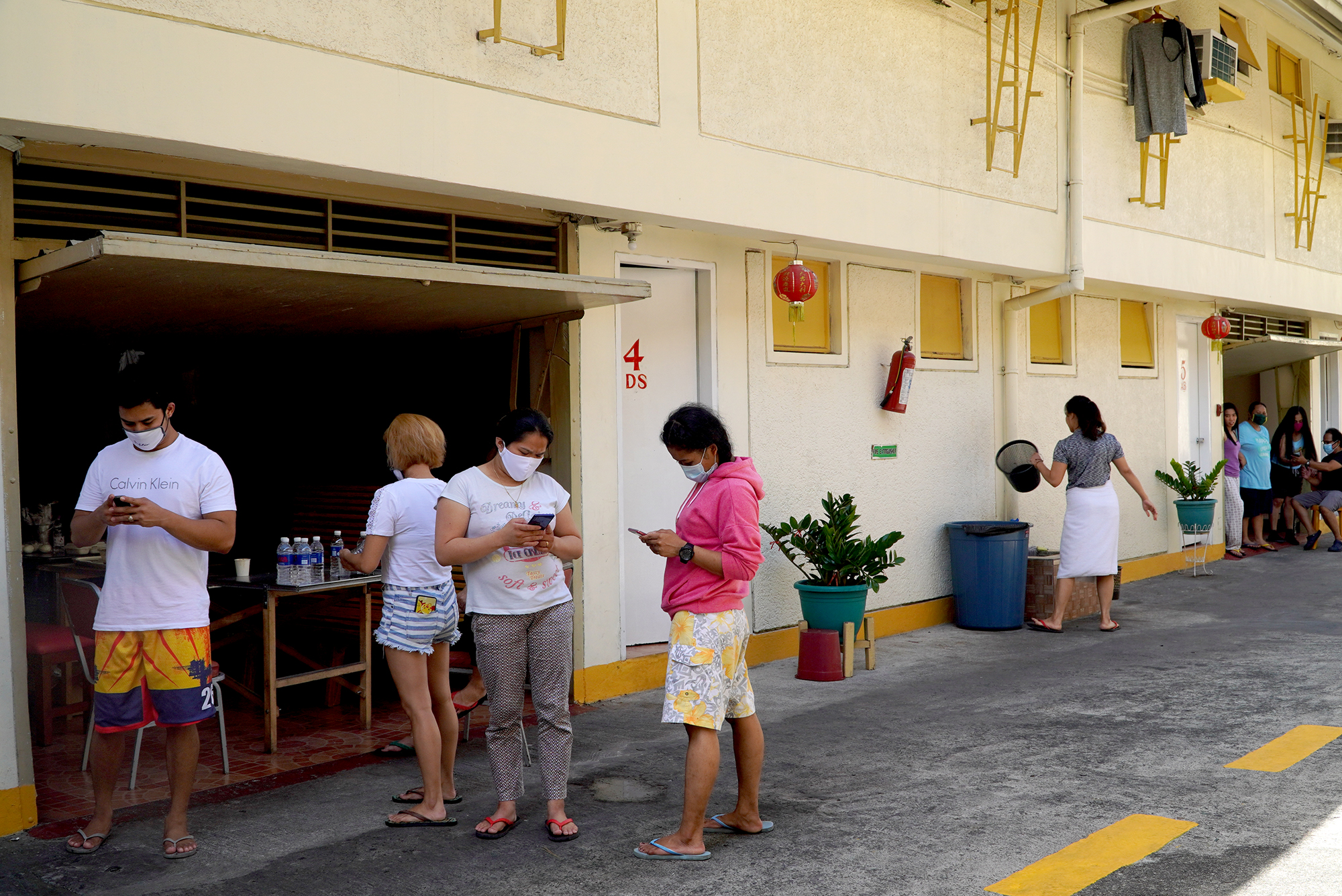 It was April 26 when more than a hundred repatriated Overseas Filipino Workers (OFWs) awoke to the news that a fellow balikbayan had hung herself in a stairwell in Room 43. They had been housed under the same lodgings for almost a month—twice the mandatory 14-day period—when the tragedy happened.

Liza Lodge, a drive-in located in a quiet alley off what used to be the crowded Baclaran street market, is one of the dozens of motels turned by the Overseas Workers Welfare Administration (OWWA) into a temporary quarantine facility. Clotheslines are strung across the garages, where shirtless men congregate around an empty table. Women sit side by side in benches, fiddling with their cellphones or fanning themselves in the heat.

After the suicide case, the Overseas Workers Welfare Administration (OWWA) promised OFWs free counseling and OWWA undersecretary Mocha Uson even paid them a visit, vowing to personally “take to Malacañang” their request for cash assistance, and to fast-track the release of their COVID-19 test results and quarantine certificates, which were requirements for travel back to their home provinces.

After a month of failed promises, tensions were running high and morale was running low. “People can’t help it. Sometimes they bicker among themselves, being stuck together like this for two months now. One time, an OWWA officer came here and told us that we should be grateful because we have free food and stay in airconditioned rooms. But the truth is, there are three of us in a room so there’s no social distancing, I only sleep on a carton on the floor,” said Rovelyn Sual Pajal, a domestic worker from Kuwait.

Rovelyn is no stranger to hardship. She left her employer after months of being mistreated—she was not being fed, and had to sneak away her employer’s leftovers into her room just to survive. So it was hurtful to hear a government official spite her. “We have the right to complain. We don’t have any money left,” said Rovelyn, who did not even get her last month’s wages. Hailing all the way from Camiguin, she also worries about the availability of flights that could take her home.

Of the 27,000 OFWs who had already been repatriated since the onset of the pandemic, many were distressed workers. Others had been laid off their jobs in sectors that were hit hard by the COVID-19 crisis, such as entertainment and tourism. 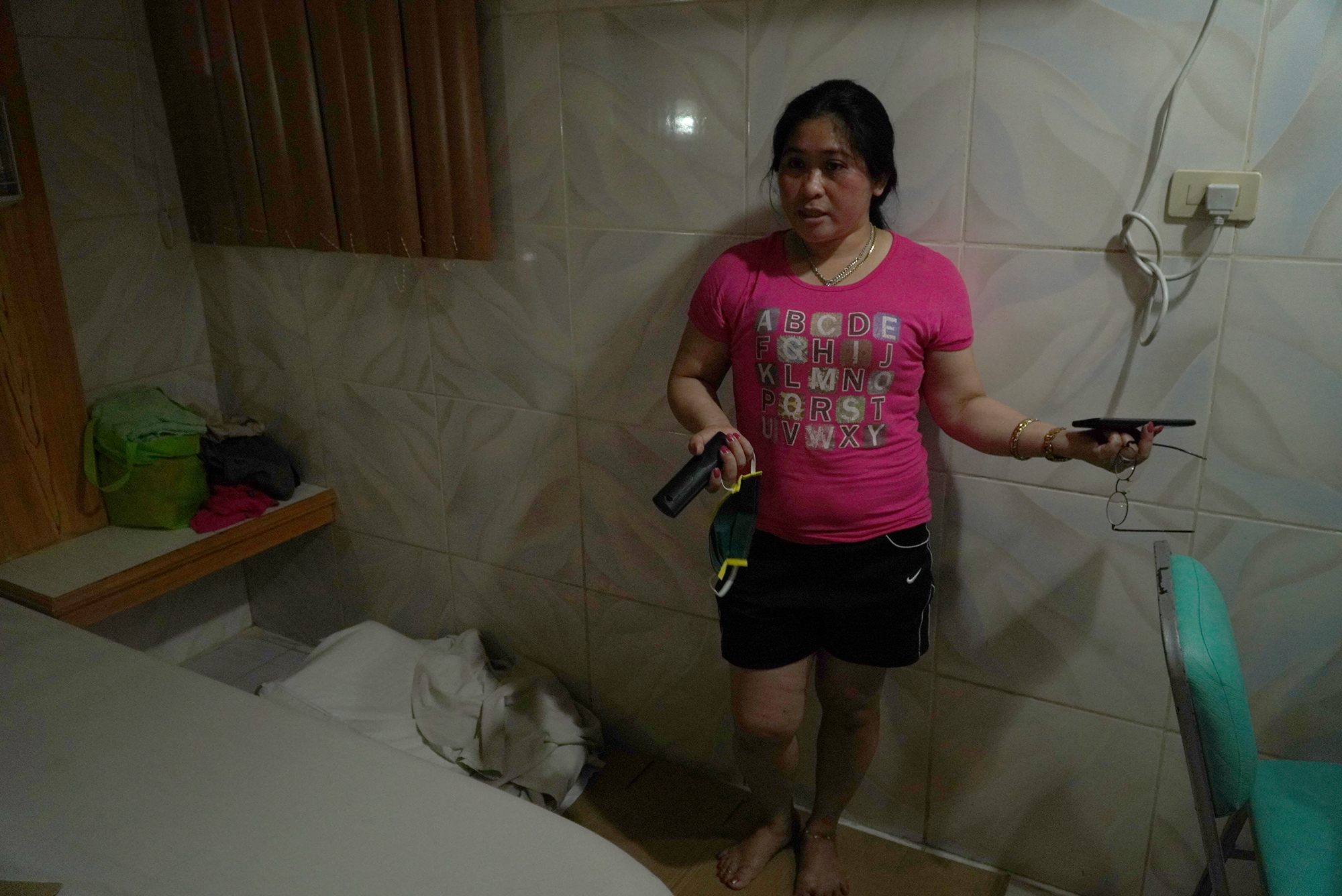 Some OFWs sleep on the floor, contrary to perceptions that OFWs in quarantine are living in comfort. (Ilang-Ilang Quijano/Altermidya)

When domestic worker Analyn Brito arrived on April 3 from Saudi Arabia, she did not have “a single riyal” in her pocket. She not having been paid wages for almost three months. Analyn had been physically abused by her employer—much like, rumors had it, the OFW who killed herself. “It’s sad. I think that maybe if she had received assistance from OWWA or DOLE as promised, even if just P1,000, it would have eased her burdens a little. Imagine being stuck here without even money for cellphone load to call your family. As a mother and OFW, I know how sad that feels,” she mused.

Analyn said that they were fortunate that the owner of the lodge was kind, helping them out with their various needs, practically stepping into the shoes that the government could not fill. She told of how authorities misspelled her name and left out her address, the reason why she has not yet been issued a quarantine certificate. (The OWWA has admitted that encoding problems has delayed the release of COVID-19 results and quarantine certificates.) 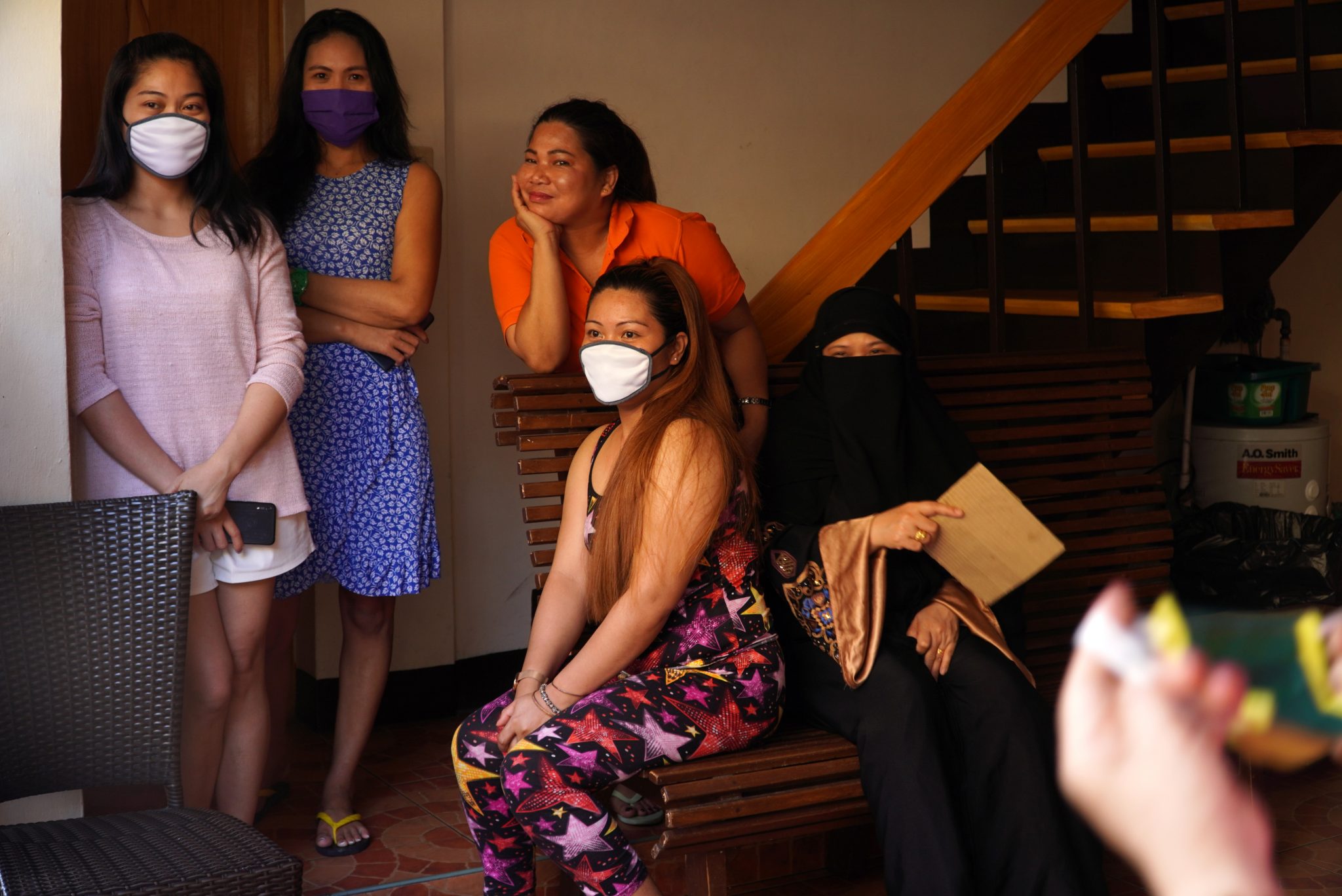 Many of the women are distressed domestic workers from the Middle East. (Ilang-Ilang Quijano/Altermidya)

“They said that the result would only take five to seven days. It has now been two months. What I fear most is if one of us turns out to be positive. Then we might have to do everything all over again,” Analyn said, missing her children who were already waiting for her in Sorsogon City.

According to Migrante International, OFWs in quarantine facilities are clearly experiencing trauma. “The system is disorganized, from assigning them to shelters to the testing. Most of them had already suffered abuse abroad. They’re left without livelihoods and unable to go home. It’s like they’re in prison. The government can’t just leave them there for two months without even sending a doctor or nurse to check on their condition, or providing counseling,” said Joanna Concepcion, Migrante chairperson. The group has been conducting relief efforts to stranded OFWs. 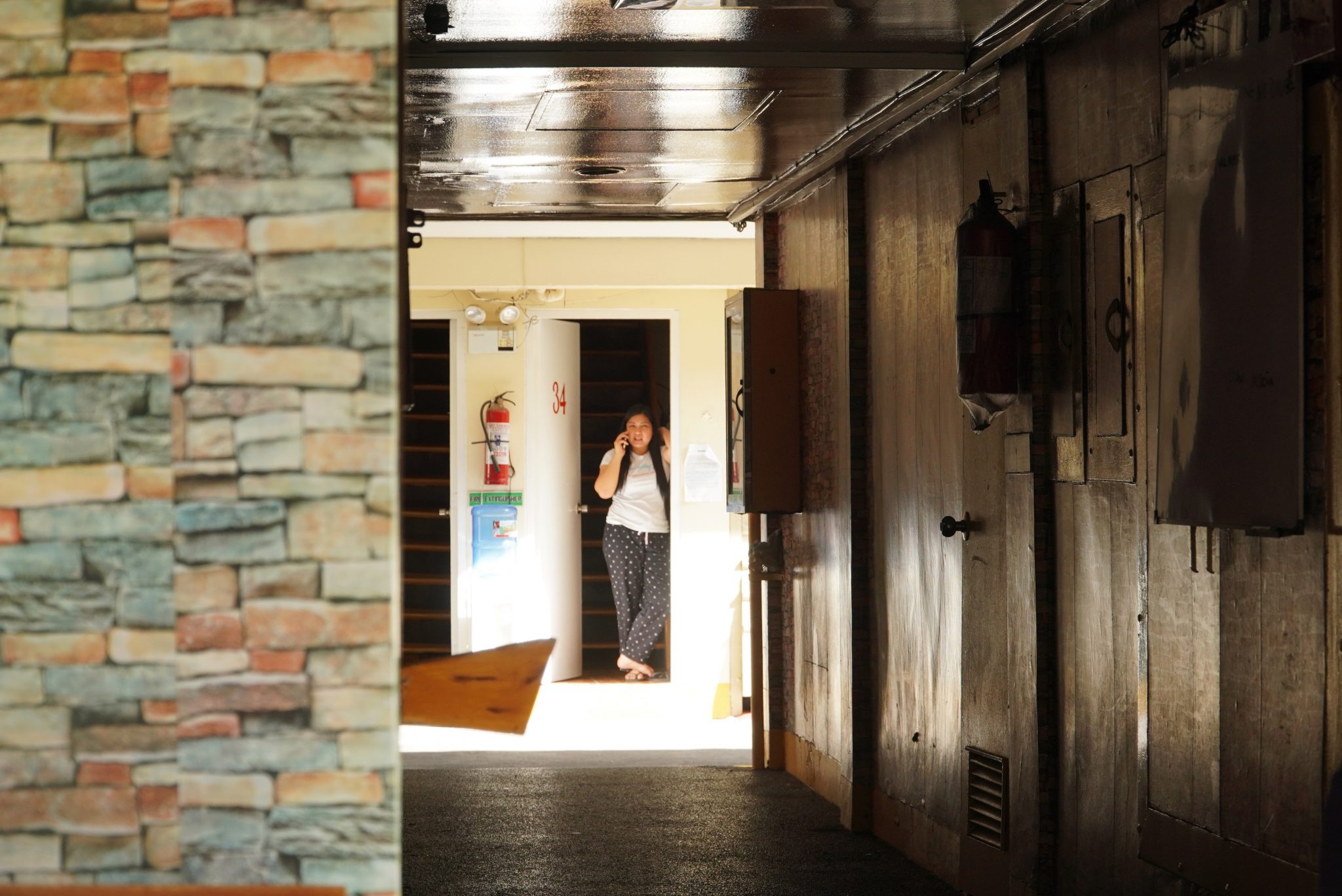 Communication with their families is what keeps OFWs sane, but some of them are running out of money for load. (Ilang-Ilang Quijano/Altermidya)

There is perhaps only one other group of OFWs who could ever say that those stranded in OWWA facilities are even “lucky”: the ones who got stuck before they could even go abroad and left to fend for themselves.

Bong Charito, a native of Lapu-Lapu, Cebu, is one of the more than a dozen seafarers currently staying in Joe Seaman’s House in Pasay City. It looks like any other house, except that it boards seafarers from the provinces who are waiting to be deployed, or those who are undergoing training in manning agencies.

Bong was supposed to leave on March 20 for a cargo ship headed to India via Singapore. But the host countries suddenly stopped receiving workers. He has since then been stranded in Metro Manila, unable to go back home due to lockdown, lack of money, and hopes that he would still be able to leave for work.

Unfortunately, he cannot even visit the office of his manning agency, which requires workers to produce a negative COVID-19 test before being allowed to set foot into the building. The agency has however refused to shoulder expenses for the COVID-19 test, which could cost up to P3,000.

According to the stranded seafarers, the OWWA provides them with food everyday. However, they still have to shell out P4,000 a month for their lodgings. “We still have a lot of expenses, and we’re running out of money to buy even soap,” Bong said. 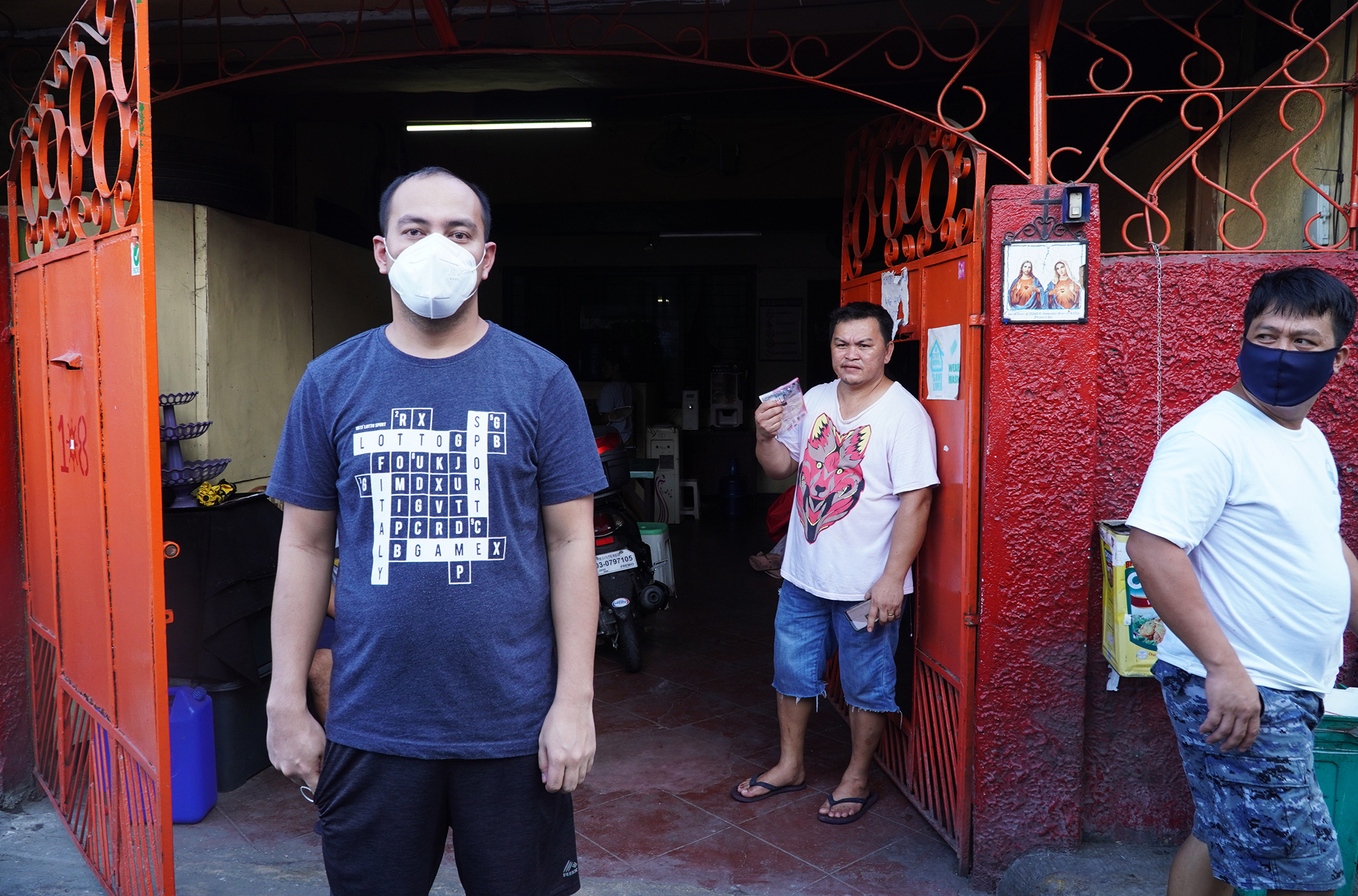 Bong Charito (left) and other stranded seafarers in a lodging house in Pasay City. (Ilang-Ilang Quijano/Altermidya)

The OFWs are hoping that OWWA could at least include them in COVID-19 testing. “We’re not asking them to shoulder everything, but we’re hoping they could provide more assistance. At least those staying in OWWA facilities have free lodgings and are priorities for the Balik Probinsya program. What about us? We cannot even get a swab test for free,” Bong lamented.

He added that when Metro Manila was placed under modified enhanced community quarantine, loan providers started calling them up. “But how can we pay up when we don’t have work? It is so hard and stressful. You’re also thinking of your family. Back in the province, they were only given relief goods one time—two kilos of rice and a can of sardines. And your family can’t even qualify for the SAP (Social Amelioration Program) because you are an OFW.”

Desperate, some of his fellow seafarers have taken jobs as food delivery drivers, while waiting for assistance or updates from their manning agency. While the group was initially reluctant to let some of them be exposed to other people, thus raising the risk of infection inside the lodging house, they realized that they just didn’t have a choice.

“I’ve been a seafarer for 10 years, and it’s the first time I’ve seen a crisis of this sort. Everything is so uncertain,” Bong said. 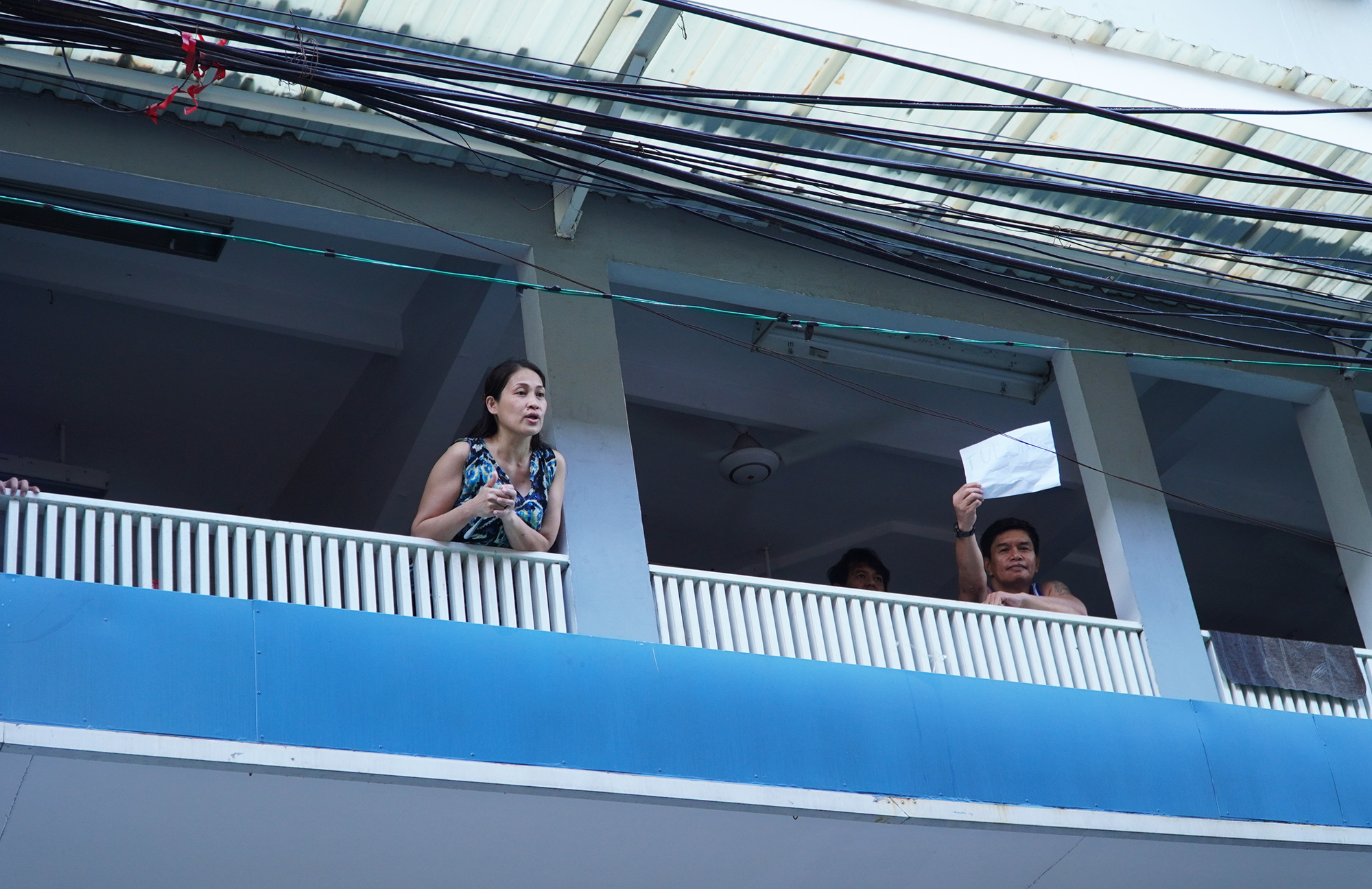 OFWs in a quarantine facility in Pasay City are calling for help. (Ilang-Ilang Quijano/Altermidya)

On the way back from Joe Seaman’s House, relief workers from Migrante International passed by another motel that serves as an OWWA quarantine facility. On the second floor, some workers shouted for attention and held up a sign that simply read, “TULONG” (HELP)–that single, universal word that connotes desperation and distress.

Update: Several OFWs staying in Liza Lodge were released from quarantine several days after the inteview for this article, which took place on May 25. The seafarers in Joe Seaman’s House remain in their lodgings.

The post OFWs in Quarantine: Desperate and Distressed appeared first on AlterMidya.