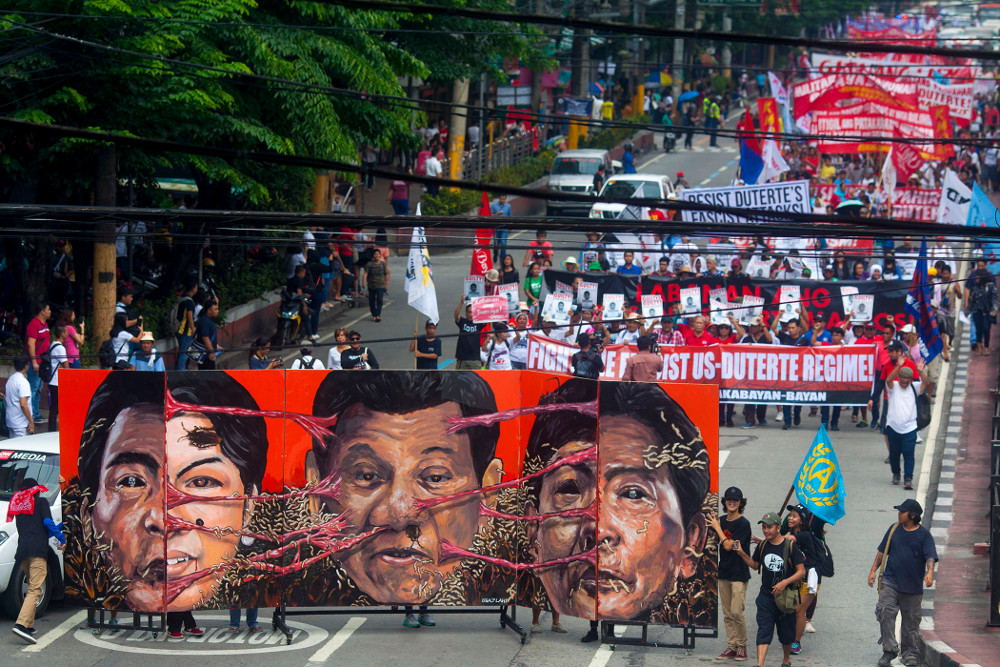 (First person account of the people’s protests in Manila during the anniversary of Marcos’ declaration of martial law in 1972, September 21, 2021 – Ed).

Blockhouse. This was the tactic used by the Philippine National Police to prevent participants from massing uip in the #TamaNa #WakasanNa rally at Liwasang Bonifacio (September 21, 49th anniversary of the declaration of martial law – Ed). This is despite having had an agreement with the Manila local government unit and coordination meeting with the Manila Police Department officials yesterday.

Policemen were deployed along possible lanes and gathering spots from Welcome Rotonda, along España road and all possible ways towards Liwasang Bonifacio. Even underpasses were obstructed. Pedestrians were also stranded because of the restrictions. Elements from the Philippine Navy were also deployed as reinforcement for the whole operation.

But no one was startled. Protesters determination was not diminished.

The protesters have anticipated this sabotage and blockade plan. They were able to deny the police the opportunity to completely block the protesting members of Bayan that planned to assemble at Plaza Gomburza. They forewent the meetup. No more march towards Liwasan.

Playing cat and mouse. Covert and guerrilla strategy. Make them be blind to our next move. Use the wide roads and narrow alleyways to our advantage, there are openings and passages that they cannot fully guard and block. Our perseverance they will not be able to quell.

One by one, the people were able to penetrate and converge at the Liwasang Bonifacio. The plaza became full of protesters in no time. The police was surprised of what the people had accomplished. Those who were intercepted and water-cannoned by the blocking police at the Sta. Cruz bridge from Plaza Lacson were able to push through and join the mass gathering. Those who got stopped along Espana road held a separate program in Welcome Rotonda.

On the anniversary of the declaration of martial law, an attempt was made to suppress the right to assembly and expression. Duterte is molded after Marcos. But like Marcos who was overthrown by the people, the corrupt and plunderer in Malacañang failed to stop the militant action of the people that happened today.

The dictator Marcos failed then. Duterte’s tyrannical regime will fail today. The people’s discontent is raging. The corrupt, fascist, torturous and puppet nature of the Duterte regime continues to be exposed. The rift within the camp of the ruling elites is widening. And soon, the people’s uprising will be thunderous.

Congratulations for the successful action earlier. Although their blockade may have separated us, we triumphed on insisting to assemble and hold programs at Welcome Rotonda and Liwasang Bonifacio.

Until next time. Onwards!