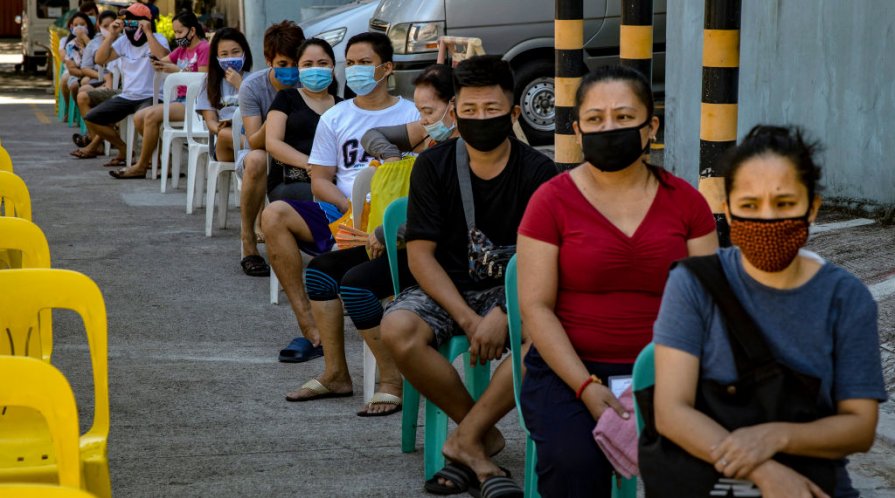 Philippine vaccine czar Carlito Galvez Jr announced that the government and private companies are set to sign a deal for two million doses of AstraZeneca’s COVID-19 vaccine on Friday, November 27.

“This coming Friday, we will sign a tripartite agreement where we can buy two million doses of Astrazeneca of the United Kingdom. We will be with the private sector who donated,” he said in a virtual press briefing on Thursday, November 26.

These two million doses will be completely funded by private firms. The government is still negotiating with AstraZeneca for around 20 million doses paid for with public funds.

“The 2.2 million [doses] is private money. We have ongoing negotiations with AstraZeneca and our deadline is December for access to 20 million doses,” said Galvez.

Key to this agreement were the efforts of the embassy of the United Kingdom led by Ambassador Daniel Pruce. Galvez has been saying for days that he had been in talks with the embassy on vaccine supply.

The AstraZeneca vaccine is being developed with Oxford University in the United Kingdom.

The pharmaceutical firm has reported it was 70% effective against COVID-19. But experts have raised doubts after finding out that the second group of participants in the AstraZeneca trials were limited to people aged 55 and below, an age group with a lower risk of developing severe COVID-19 symptoms.

But it’s still a long way to go before the two million AstraZeneca vaccine doses are actually distributed to Filipinos.

The vaccine will still have to pass the United Kingdom’s regulatory process and get approval from the Philippines’ Food and Drug Administration. This critical approval could come as early as May to July next year or late next year, said Galvez.

Half to private sector

The AstraZeneca vaccine requires two doses, hence the two million donated by the private sector on Friday will be enough for only one million people.

Christian Gonzalez of the Enrique Razon-led ICTSI (International Container Terminals Services Inc), one of the private companies making the donation, said the “vast majority” of these initial vaccine recipients will be “government employees, frontline health workers and other essential services workers” as designated by the Department of Health.

It’s not yet clear who is donating this first batch of two million doses but ICTSI has committed to donating this number of doses, based on Gonzalez’s remarks at a Tuesday Malacañang press briefing.

“Fifty percent of this vaccine will be purely for the use of DOH under what is called equitable distribution to be determined by the government. The other 50% will be for the private entity to determine,” Gonzalez said on Tuesday.

ICTSI will use its share of the vaccine supply for its employees and those of the entire Razon Group, said Gonzalez.

But the firm will also devote some of their doses to employees of the Philippine Ports Authority, Bureau of Customs, and other essential port and logistics workers – frontliners who “made the biggest impact, especially at the beginning of the pandemic,” said Gonzalez.

Apart from Enrique Razon, other Filipino tycoons and businessmen have pledged to help the government secure COVID-19 vaccines. These include Lucio Tan, the Sy siblings, Ramon Ang, and Presidential Adviser for Entrepreneurship Joey Concepcion.

Concepcion, who is also founder of Go Negosyo, said the private sector aims to procure 2.5 million to 3 million doses of the AstraZeneca vaccine. The deal to be signed on Friday has an estimated cost of P600 million to P700 million.

This would mean the vaccination of up to 1.5 million people. The vaccine is expected to cost around P500 or $10 for two doses.

The private sector has played a big role in the Philippines’ pandemic response. From donations of various goods, to testing employees and poor households, conglomerates have stepped in, as the government has drawn flak for how it is handling the crisis.

The vaccine czar told President Rodrigo Duterte that the AstraZeneca-Oxford vaccine was the most affordable vaccine among those being negotiated for by the government, priced at around $5.

(We can see that AstraZeneca is good because it’s non-profit and they have the lowest price, more or less $5 only.)

Galvez praised AstraZeneca and the UK embassy for their “goal of providing equitable access” of the vaccine to developing countries like the Philippines.

Apart from AstraZeneca, Galvez has spoken of securing “20 to 50 million doses” of China’s Sinovac COVID-19 vaccine.

The Philippines aims to inoculate 60 million to 70 million Filipinos within 3 to 5 years. Some 35 million will belong to the first batch of recipients, a mix of poor households, healthcare workers, and frontline personnel.

To purchase these vaccines, the government is targeting a budget of P73.2 billion. Galvez is batting for a P150 billion fund in the 2021 national budget to shoulder expenses for a cold chain storage system necesary to distributing the vaccines. – Rappler.com