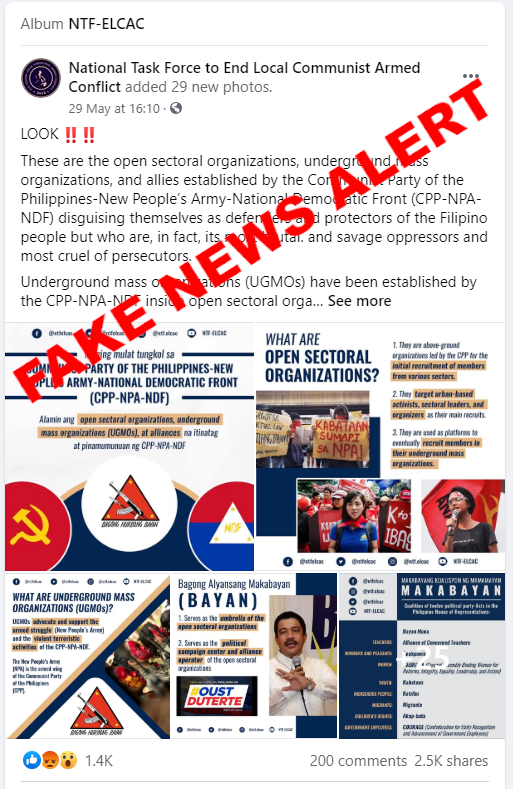 The Office of the National Task Force to End the Local Communist Armed Conflict (NTF-ELCAC) recently released in social media posts (especially in Facebook) the names of organizations linking pro-people organizations to the Communist Party of the Philippines (CPP); fomenting threats and condemnations from among the online followers of the military and the Duterte government.

The gross red-tagging of people’s organizations, partylist groups, and even of religious groups is a blatant disregard of basic democratic rights.

These organizations are legal pro-people organizations; the partylist groups elected in Congress (Bayan Muna, Gabriela, ACT, Kabataan and Anakpawis) are all duly recognized by the Commission on Elections (COMELEC), each party represents a specific marginalized sector in the country, bringing pro-people concerns thru participation in Congress. And other organizations representing the media, students, indigenous people, migrants, environment, farm workers, urban poor, labor and others.

Migrante International, an international organization of migrant Filipinos abroad (and a co-signatory of this call) is one those red-tagged in social media; we manifest our support to Migrante, aware that this organization will not be cowed by this recent malicious branding.

Rodrigo Duterte and his war-freak police and military forces, in the name of National Task Force to End the Local Communist Armed Conflict (NTF-ELCAC), is using the dirty-old tactic of red-tagging.

We are all aware that this recent red-tagging is stained with violence and malicious intent as it were in the past, consistently defaming the value of human rights and of our dedication to serve the poor. We want to remind the implementors and campaigners of this red-tagging scheme that we will pursue legal investigation and accountability for the threats, intimidations and violence done to the leaders, organizers and members of the named groups.

We call our fellow Filipinos to never be deceived by the hopeless campaigns of the National Task Force to End the Local Communist Armed Conflict (NTF-ELCAC); be completely aware that the Department of National Defense, the Armed Forces of the Philippines and other sectors of the state forces are using peoples’ money for this media campaign enterprise; and be vigilant that our own government is sanctioning the killings and salvaging of our activists, organizers and members of peoples’ organizations.

As the country faces the grim impacts of the pandemic, and as the Filipino people are suffering from the incapacities of government response; the military and their agents have still the nerve to instill violence and threats to organizations and individuals. Recently, Carlito ‘Karletz’ Badion, Secretary-General of Kalipunan ng Damayang Mahihirap (KADAMAY) was murdered by the state-forces in Ormoc, Leyte. As we condemn this vicious killing of our comrade, we offer our salute to ‘Ka Karletz’ for his selfless dedication and service to the urban poor.

Our network of organizations in Europe condemn this malicious red-tagging of our allied organizations, fellow activists, and members of the red-tagged groups! We are not terrorists! The Duterte Government is! The AFP-PNP tandem is the one terrorizing our organizers and leaders in the communities, with threats and deaths! You are the terrorists in military clothing!