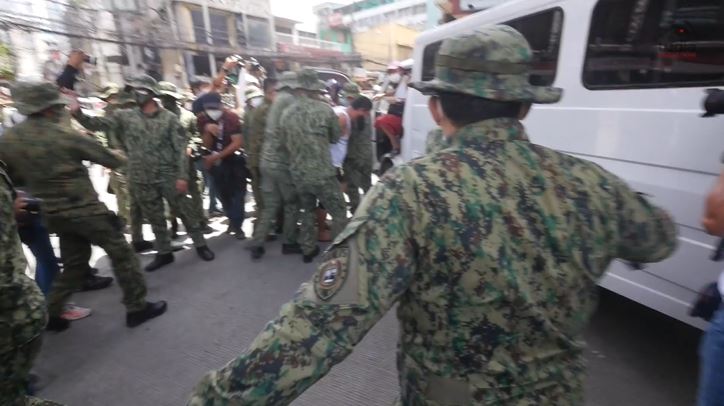 “We cannot allow the violations of people’s rights to peacefully assemble and air their legitimate grievances be brushed aside. As the Duterte regime tightens its iron-handed grip on our democratic freedom, we have no choice but to push back to ensure that these freedoms will be continually preserved and enjoyed by the people.”

MANILA – Arrested LGBTQI+ protesters shared the horrors they experienced during the violent dispersal in Mendiola and their subsequent detention as they filed criminal and administrative complaints before the Office of the Ombudsman against 32 Manila policemen.

Collectively referred to as “Pride20,” the arrested protesters filed a complaint before the Office of the Ombudsman on Tuesday against 32 Manila police officers for violating Batasan Pambansa No. 880, unlawful arrest, slight physical injuries and maltreatment, carnapping, and qualified gender-based sexual harassment.

Pride 20 also alleged that the police officers violated the Code of Conduct and Ethical Standards of Public Officials and Employees and the Revised PNP Operational Procedures.

“We cannot allow the violations of people’s rights to peacefully assemble and air their legitimate grievances be brushed aside. As the Duterte regime tightens its iron-handed grip on our democratic freedom, we have no choice but to push back to ensure that these freedoms will be continually preserved and enjoyed by the people,” said Rey Valmores Salinas, spokesperson of Bahaghari and one of the arrested Pride protesters.

Read: ‘No legal basis for charges vs #Pride20’ – lawyers group

Apart from the Ombudsman complaint, the Makabayan Coalition, a bloc of progressive lawmakers in the House of Representatives have filed House Resolution 1026 on July 6, seeking an investigation of arrest of the Pride protesters.

“We either let impunity reign, or we fight back. We choose to fight back,” Salinas said in a statement.

Irony was not lost to Pride protesters who said that they observed physical distancing during the protest action only to be crammed by police officers in their mobile.

“They forced us into the police mobile, where our other colleagues were. We asked them if we are being arrested and what are the laws we violated. A police officer said we are not being arrested so we insisted that we will not go with them,” said Andrew Zarate, one of the of arrested Pride protesters.

Zarate, along with Carla Nicoyco, said they were eventually boarded into a white vehicle, without any police markings.

Nicoyco said they were not read their Miranda rights nor were they answered when they asked for their names.

Seven of the arrested Pride protesters were also made to sleep at a tiny corner in Manila police headquarters, where Nicoyco noted was “impossible to have social distancing.”

“The police did not give us beddings or blankets or pillows. If not for the kind donations of several concerned citizens who understood our plight and understood that the arrests were unlawful, we would be sleeping on the floor in freezing room filled with cockroaches, with nothing to keep us warm but our rainbow flags,” Nicoyco said.

Joan Salvador, for her part, sustained injuries as the police forced her into their vehicle. She had yet to lift her foot in when the police slammed the door, injuring her.

Meanwhile, Nicky Lamaclamac, the driver of the van owned by Gabriela, was also manhandled by the police. He was pulled by the arm until he fell flat on his face. He was then dragged near to the Mendiola peace arch before being brought to the Manila police headquarters.

Another protester Aljohn Estrella, who was inside the van, attempted to evade the violent dispersal. But three police officers grabbed him when he asked people for help.

On the way to the police headquarters, Salvador said they kept badgering the police for their names and the laws they violated. They were, however, met with silence.

“It’s not our fault that you don’t have a vehicle. You should not have arrested us in the first place,” she told the police.

Pride protesters said the police initially insisted on segregating them by sex. Nicoyco narrated that she insisted she is a transwoman and should not be detained along with male detainees.

After immense negotiations, she said, “the police finally gave in and let me stay with the other women – but not without backlash, harassment, and other discriminatory behaviors from the police.”

“That’s a man,” a police officer was quoted as saying when Nicoyco entered the detention area for women. She was also repeatedly misgendered as “sir.”

Salinas, on the other hand, said she received uncalled compliments from police officers during her detention.

“Police officers would look at me from head to toe, tell me I am beautiful or tall, or talk to me even if I don’t want to,” she said.

Even while in detention, the Pride 20 said they were still threatened.

When one of the Pride 20 asked to adjust the air-conditioning unit’s temperature, a police officer told them that they should be transferred to the jail, where it is hot.

“The other day, our detainee died for being hard-headed,” a police officer was quoted as saying, adding that, “I had someone gunned down the other day.”

In their complaint before the Ombudsman, the Pride 20 said it is the police – not them – who violated the BP 880 as the law itself guaranteed that to peaceably assemble and petition the government for redress “is essential and vital to the strength and stability of the State.

They said that the police obstructed their right to peaceful assembly, failed to observe maximum tolerance, carried firearms within the parameters of the rally.

Pride 20 also argued that the law’s provision on non-cooperation of persons identified as having notifiable disease is not applicable to their case for the simple fact that they never tested positive for COVID-19.

“We would like to reiterate what we have mentioned above: we strictly adhered to physical distancing. We wore masks because we acknowledge the pandemic that is confronting us today,” the complaint read.