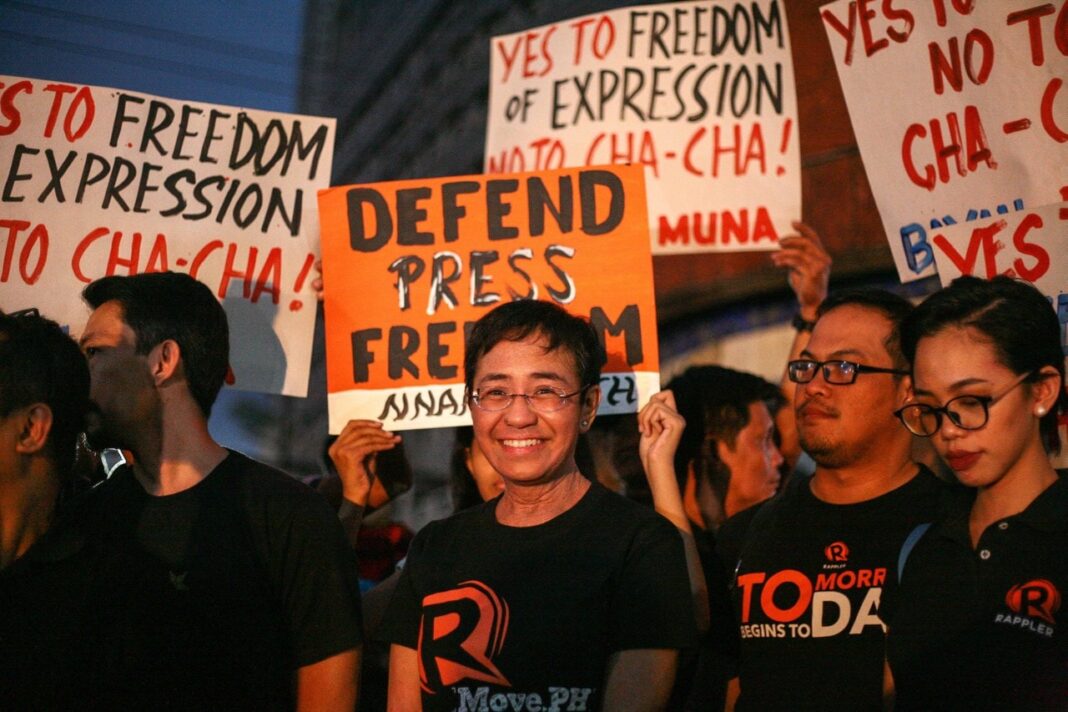 They win ‘for their efforts to safeguard freedom of expression, which is a precondition for democracy and lasting peace’

Rappler CEO Maria Ressa and Russian journalist Dmitry Muratov were awarded the Nobel Peace Prize for 2021 on Friday, October 8, in an unprecedented recognition of journalism’s role in today’s world.

They won the prize “for their efforts to safeguard freedom of expression, which is a precondition for democracy and lasting peace.”

Ressa has been the target of attacks for her media organization’s critical coverage of President Rodrigo Duterte’s administration and a key leader in the global fight against disinformation.

This is the first Nobel Prize for a Filipino. In 2007, the Nobel Peace Prize went to former US Vice President Al Gore and the Intergovernmental Panel on Climate Change, a team of climate scientists which included former Ateneo president Fr Jett Villarin.

The award-giving body also acknowledged Muratov, one of the founders of the independent newspaper Novaja Gazeta, for his decades of defending “freedom of speech in Russia under increasingly challenging conditions.”

The Norwegian Nobel Committee said the newspaper is “the most independent newspaper in Russia,” publishing critical articles on “corruption, police violence, unlawful arrests, electoral fraud and ‘troll factories,’ to the use of Russian military forces both within and outside Russia.”

“Free, independent and fact-based journalism serves to protect against abuse of power, lies and war propaganda,” the committee said in a press release.

“The Norwegian Nobel Committee is convinced that freedom of expression and freedom of information help to ensure an informed public. These rights are crucial prerequisites for democracy and protect against war and conflict. The award of the Nobel Peace Prize to Maria Ressa and Dmitry Muratov is intended to underscore the importance of protecting and defending these fundamental rights.”

Ressa and Muratov are the latest journalists to be awarded the Nobel Peace Prize, the world’s most prestigious political accolade.

In February, Norwegian labor leader and parliamentary representative Jonas Gahr Støre nominated Ressa, Reporters Without Borders, and the Committee to Protect Journalists for the 2021 Prize.

“She is thus both a symbol and a representative of thousands of journalists around the world. The nomination fulfills key aspects of what is emphasized as peace-promoting in Alfred Nobel’s will. A free and independent press can inform about and help to limit and stop a development that leads to armed conflict and war,” Støre said in his nomination.

Rappler is one of the two verified signatories of IFCN’s Code of Principles in the Philippines – the other being Vera Files.

The attacks against Ressa and Rappler have reached the world stage. When Duterte assumed office in 2016 and launched his signature bloody drug war, Rappler cast a harsh light on the extrajudicial killings the President himself encouraged.

In June 2020, Ressa and former researcher Reynaldo Santos Jr. were convicted of cyber libel – a judgment Rappler regards as a failure of justice and democracy. Ressa and Santos are out on bail, and have filed their appeal with the Court of Appeals.

This is one of at least seven active cases pending in court against Rappler as of August 10, 2021.

Award-winning documentary A Thousand Cuts, released in 2020 by Filipino-American filmmaker Ramona Diaz, outlines Rappler’s journey and the fight for press freedom in the country.

Among other numerous awards in her decades of working in journalism, Ressa was named Time Magazine’s 2018 Person of the Year.

Before founding Rappler, she focused on investigating terrorism in Southeast Asia as she reported for CNN’s Manila and Jakarta bureaus. – Rappler.com