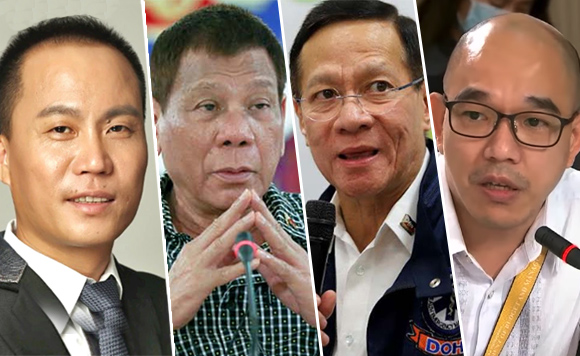 MANILA, Philippines — President Rodrigo Duterte is at the center of a “grand conspiracy” to defraud the government of billions of pesos perpetrated at the height of the pandemic by his Chinese friend and former economic adviser Michael Yang, executives of Pharmally Pharmaceutical Corp. and former and current budget procurement officers, according to a report by the Senate blue ribbon committee released on Tuesday.

It was the President “who allowed his friends to bleed this nation’s coffers dry,” said Sen. Richard Gordon, who disclosed his committee’s preliminary report during Tuesday’s hearing, the 12th since the inquiry started on Aug. 18.

“It is clear and categorical to us that this grand conspiracy could never have happened without the imprimatur of the President,” said the senator, who has been the target of many tirades from Duterte since the investigation started.

He said criminal charges should be filed against Yang, who allegedly provided financial backing for Pharmally, a company capitalized at only P625,000, so that it could fulfill its contracts amounting to P11.5 billion in 2020 and 2021 to supply the government with, among others, face masks and shields, personal protective equipment (PPE) and COVID-19 test kits.

Presidential spokesperson Harry Roque dismissed the allegations against Duterte as a “tall tale.”

“I will repeat, first of all, there was no overprice in the purchase of the PPEs according to the chairman of the Commission on Audit (COA),” Roque said in a press briefing.

He also insisted that no law was violated in awarding the contracts to Pharmally because the Bayanihan 1 law authorized the President to make emergency purchases amid the pandemic.

“If there was no violation of the law and no overprice, why will there be a grand conspiracy? That is a tall tale from a person who is politicking,” he said, referring to Gordon, who is running for reelection.

In separate hearings held by the House of Representatives and the Senate, COA Chair Michael Aguinaldo told lawmakers that its report contained no statements on overpricing.

Aguinaldo did not say there was overprice but neither did he say that there was no overprice because COA’s “observation,” the audit body’s term for its comments, was “related more to inventory management” rather than prices of procured goods.

He told the Senate that there would now be a “special audit” to look into it.

Gordon’s committee said Yang, a businessman, should be deported. But under Philippine law, such a move is usually made once all charges against a foreigner are resolved.

The committee said Yang was liable specifically for perjury, violations of the Bayanihan 1 law and the Anti-Graft and Corrupt Practices Act “for causing undue injury” to the government by giving a private party unwarranted benefits, and entering into contracts which were “manifestly and grossly disadvantageous to the government.”

Yang, who was defended by the President on several occasions, had denied that he gave Pharmally a loan so it could pay Chinese companies for the pandemic supplies.

Last year, the DOH transferred at least P42 billion of its pandemic funds to the PS-DBM to procure items that it found hard to purchase on its own. But the COA flagged the transfer for lack of a memorandum of agreement or other supporting documents.

“Our inquiry in aid of legislation reveals unconscionable, unabashed and unethical circumventions of our republican way of governance,” Gordon said.

“We found that those involved prioritized their profits, commissions or kickbacks, instead of coming up with the right way to quell the pandemic,” he said.

The Senate discovered that the PS-DBM awarded Pharmally the lion’s share of the contracts totaling P8.7 billion just for 2020 despite being undercapitalized.

“From our investigation, it was clear that there were ‘unwarranted benefits, advantage or preference or favoritism’ for Pharmally, which only had a capital of P625,000, no experience in contracting, and even declared a loss in its first year of business. But it secured a whopping P8 billion to P11 billion in contracts from PS-DBM,” Gordon said.

Pharmally director Linconn Ong, who is detained in the Senate on contempt charges for his supposed evasive and inconsistent testimony, faces possible charges of perjury, violations of the Bayanihan law and for disobeying summons from lawmakers.

Pharmally’s regulatory affairs head Krizle Grace Mago, who sought refuge in the House and recanted her earlier testimony that the company defrauded the government, was cited for “estafa” or swindling, perjury and Bayanihan law violation.

The panel endorsed charges of graft and corruption, and fraud against the public treasury and similar offenses against both Lao and Liong.

It also recommended a charge of falsification of public documents against Liong, Mendoza and Tanquintic in the alleged falsification of the inspection reports of deliveries made by Pharmally to the PS-DBM’s warehouses.

Gordon stressed that the panel was far from finished in its probe, suggesting that more people could be prosecuted.

“They are trying to cover up their unconscionable crimes. We will not allow them. We will pursue in the people’s name not only to punish the perpetrators but also for them to return the money they stole from all of us,” he said.

For the second time, Health Secretary Francisco Duque III and other officials of the executive department did not attend the blue ribbon hearing, invoking the President’s orders to ignore the committee’s summons.

In a letter to Gordon’s panel, Duque, however, gave “firm assurances” that DOH officials would continue to cooperate with the inquiry and would submit “any and all documents” to help the investigation.

Roque said the President believed that the officials had already given so much time to the inquiry that their jobs related to quelling COVID-19 were being compromised.

“The President is just saying that enough is enough at the time of pandemic,” he said.

Hundreds of doctors and leaders of medical groups have urged officials to cooperate in the investigation and attend the hearings.

The latest group to express support for the probe was St. Luke’s Medical Center Employees Association which opposed the President’s directive.

“Barring Cabinet members and other officials to attend hearings conducted by the Senate blue ribbon committee does not only disrespect the august chamber but is a clear attempt of the Duterte administration to protect the executives of Pharmally Pharmaceutical Corp. and their cohorts,” said association president Jao Clumia.

—WITH A REPORT FROM LEILA B. SALAVERRIA INQ