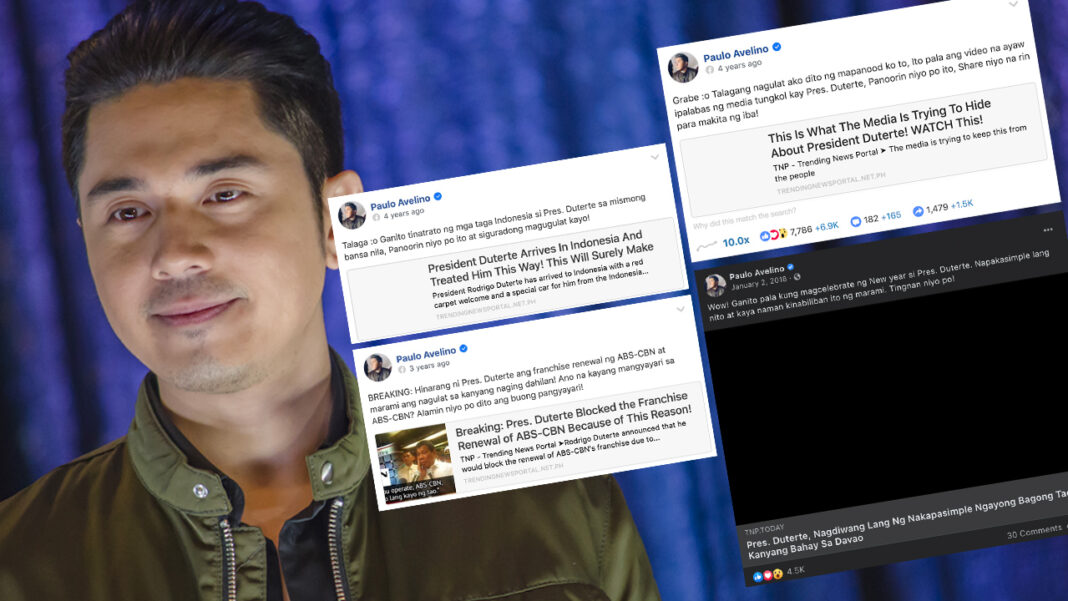 (UPDATED) EXCLUSIVE: Internal documents from Twinmark Media Enterprises, the agency banned by Facebook for coordinated fake behavior, show how the power of celebrities is used for money and disinformation

Filipino celebrities and influencers earn hundreds of thousands to millions of pesos by amplifying – either knowingly or indirectly – government propaganda, false information, and fake networks that breed online disinformation, a Rappler investigation showed.

Celebrities’ endorsement of questionable content – done via sharing on their verified and official Facebook pages – is sinister, as it lends credibility and legitimacy to websites and pages that are out to pollute the online environment and spread disinformation. Such practice also lacks transparency, as posts appear as if they were organic or unpaid for.

The strategy: Twinmark pays stars and influencers, as well as several popular meme and celebrity fan pages, to share content from Twinmark-owned websites to increase engagement.  The agency also has its own pages.

Facebook users that follow the celebrity, celebrity-linked, or popular pages get to see the posts, then be led to the Twinmark websites, and be served money-generating ads, false information, or propaganda. It’s a lucrative sport for everyone in the network.

In a legal document seen by Rappler, Facebook told the agency in January 2019:

“It has come to our attention that your company, Twinmark Media Enterprises, Inc., has developed a network of Facebook pages and accounts that you exploit for financial gain through the use of multiple fake accounts working together to mislead people about the origin of content. Your accounts and pages post and share misleading content designed to induce users to visit your external websites that exist primarily to serve advertising. Moreover, you sell Facebook Pages and posts, enabling  the spread of unwanted spam content. Your activities are illegal and unauthorized and must stop immediately.”

Oftentimes, too, Twinmark-linked pages suddenly shift their identities and content – say, from entertainment to politics – usually to promote a politician or push out propaganda during an election season. A former Twinmark employee told Rappler they had several local and national politicians as clients.

What better way to spread their (dis) information than to use popular idols on mainstream and social media?

Celebrities and public figures have millions of followers and reach, often topping those of fact-checkers and news media – an imbalance that had most been felt during the coronavirus crisis.

Oxford’s Reuters Institute found that while public figures were only responsible for spreading 20% of false claims about the coronavirus, their posts accounted for 69% of total social media engagement.

Based on internal Twinmark databases and documents obtained and verified by Rappler, the digital agency paid “advertising fees” to celebrities and influencers in 2017 and 2018 – the years before the Facebook ban – ranging from P10,000 to more than P250,000 monthly. In those two years, several celebrities and personalities earned over a million pesos.

As early as 2017, Rappler found that the network was among the primary vectors for the spread of government propaganda and disinformation – with the constant help and shares from former Presidential Communications Operations Office assistant secretary Mocha Uson. (READ: What is Mocha Uson’s top source of news?)

TNP was regularly given a boost by Uson, as well as several celebrity, fan, and pro-Duterte pages. The content of TNP and other Twinmark websites was shared on partner pages with the same caption and at almost the same time.

Internal documents obtained by Rappler showed that Twinmark paid Uson’s page at least P1.08 million in 2017. The agency deposited payments to the bank account of Lord Byron Cristobal, commonly known as Banat By, one of the co-administrators of Uson’s page.

The agreement, as indicated in the database obtained by Rappler, was for Uson’s page to share 4 TNP posts daily from February to July 2017, and 4 daily posts from netcitizen.co, another Uson favorite, for the whole month of October. There was no information about the deal during the other months but Twinmark content was still shared on her page.

It wasn’t just Uson’s page that was a mainstay of Twinmark’s network. The verified page of actor Paulo Avelino was among the consistent partners. Avelino’s official page was paid a monthly fee of P105,000 in 2017 and 2018, totaling at least P2.2 million for these two years, according to the internal documents.

Around that time, Avelino shared TNP content containing propaganda about President Rodrigo Duterte and, at times, even false information.

According to the documents obtained by Rappler, the deal between Avelino’s page and Twinmark was for the page to regularly share posts from 3 websites, including TNP.

The check payments were deposited to the bank account of a certain Michael Balondo.

“Thank you for alerting us. We are not aware of it. A lot of fan pages were set up. Paulo is aware of that but he is not aware of every single one they’ve made and that they used it for those purposes,” Henson told Rappler in a phone call.

But for them to not know about the deal is arguable, as Avelino’s Facebook page was a verified one – meaning it underwent a verification process. According to Facebook, a verified badge means that the company confirmed that “this is the authentic page or profile for a public figure, media company or brand.”

Henson also admitted that they have known and worked with Balondo for years but denied that the management and Avelino knew about the Twinmark deal.

It is also unlikely for a digital company like Twinmark to pay a monthly fee of at least P100,000 if the page was only a fan page.

The same internal documents obtained by Rappler showed that such amount was usually reserved for verified pages of popular influencers and celebrities. The internal files also showed that many of these payments were sent either straight to the bank accounts of the talents or to their managers.

In reply, Henson said he would sometimes ask Balondo to post Avelino’s endorsements on the page, as Facebook exposure is usually part of the celebrity’s contract.

Rappler repeatedly reached out to Balondo, who said he would comment, but still hasn’t as of posting. We will update this story once he responds.

Another famous celebrity who was on Twinmark’s ad payroll was Jasmine Curtis-Smith.

Internal documents showed that the actress was paid a total of at least P405,000 for half a year in 2017. A quick search on her official verified page also showed that she had been sharing Twinmark-linked websites as early as October 2016.

Her page also posted another misleading content by a known Twinmark site, which said that USA Today wrote an article about how Duterte already fulfilled his promises in just two weeks.

What USA Today wrote, however, was: “In that short span, he has left a bloody trail of drug world executions that is drawing alarm from human rights groups and opposition politicians.”

Radio personality DJ Chacha was also on Twinmark’s payroll from March 2017 to May 2017. She was paid P30,000 per month. She mostly shared socialpees.com and filcommunity.com, questionable sites known for their clickbait, misleading, or false information.

Rappler e-mailed her on February 16 to ask for comment but she hasn’t replied as of posting.

According to documents obtained by Rappler, the payments to Curtis-Smith and DJ Chacha were sent to the bank account of their management, Vidanes Celebrity Marketing (VCM).

Elizabeth “Betchay” Vidanes, founder of VCM, confirmed to Rappler that they indeed had an engagement with Fernando Hicban, one of the brother-owners of Twinmark, in September 2016 “for social media marketing purposes to promote health-related, positive-vibe articles.”

At the time, she said VCM was not aware of any violation.

“When we reviewed the website of Mr. Hicban, with whom we met for the engagement, we did not find any trace that his website was ever involved in improper or offensive activities such as faking accounts or publishing questionable government propaganda, its contents were just health-related and wholesome stories, which is why we accepted the engagement,” she said in an e-mail to Rappler.

Clearly, however, the posts were not “health-related, positive-vibe articles.”

VCM later on decided to end the deal when the posts their talents were asked to share were no longer “consistent” with the artists’ images. The nature of these posts, though, were not clarified.

“When we later received requests to post articles that, to our judgment, are no longer consistent with our talents’ brand image, we already distanced from Mr. Hicban and the company he represented, and ended our social media marketing engagements with them.”

Other celebrities paid to share propaganda or boost network

The other celebrities who received payment from Twinmark, according to documents obtained and verified by Rappler, were the following:

The payments were deposited not to her account, but to that of a certain Paolo Esteves Santos.

The comedic duo was paid a total of at least P1.6 million for 2017 and 2018. Most of the payments were sent to Rudolf Filomeno Macasero, one of the brothers in the duo. They still share content from dubious sites and pages.

Rogel Cariño in real life, the former child star still shares content from the revived websites of Twinmark. Documents showed that payments in 2017 and 2018 were sent to either bank accounts of Cariño or his partner, volleyball player Ennajie Laure.

The verified page of the former YouTube couple JaMich regularly received payments from Twinmark, amounting to at least P965,000 in 2017 and at least P1.27 million in 2018.

The verified page, with at least 7.7 million followers, claims “to be a tribute fan page run by admins.” But Twinmark documents showed that the agency deposited the payments for the page to Mich Liggayu, the other half of JaMich.

In 2017 and 2018, Liggayu also received separate payments from Twinmark for sharing content on her own verified page, amounting to at least P3.9 million. Rappler sought Liggayu’s comment but she has yet to respond. We will update this story once she does.

Other influencers cited in the documents were: Lance Julian, the owner of the Senyora Santibañez page and a known Duterte supporter; UFC ring girl Rovilyn “Red” dela Cruz; and Yexel Sebastian.

Given their power and influence, celebrities should be accountable to their viewers and followers. They should find out and know who hires them, in the same way they do so for brand endorsements.

“It is a question of what to do with the power/status that they have: Will they be instruments of truth or a contributor to the pollution of the information ecosystem? And this question should be answered both by celebrities and us, their audience,” sociologist Prince Aldana, who teaches at UP Los Baños, told Rappler.

This scheme is not unique to Twinmark, after all. The dangers have more far reaching consequences as the Philippines nears the 2022 elections, where the battlefield shifts online due to the coronavirus pandemic.

It’s a testament to these celebrities’ reach, highlighting their role in contributing to disinformation whether wittingly or unwittingly, willingly or not, by selling their content space to the highest bidder. – with reports from Don Kevin Hapal/Rappler.com